The Decorated Phrase Above All Else 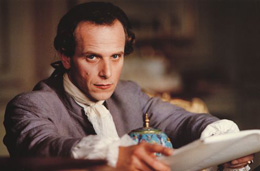 Sumptuous light, favorably bathed across richly-drawn characters and their worlds, have long been signifiers of a Patrice Leconte film, yet while such environments exist in the auteur's 1996 comedy-drama, "Ridicule," the words produced within them hold much more prominence.

Set in Versailles during Louis XVI's rule, it is not only a matter of pride in the story that le bel esprit -- the art of wit -- comes naturally to one's tongue, but also a necessity to any political or social aspirations that follow. If you are not a brilliant wit, you will get nowhere in his court. Miraculously, Leconte transfers his cinematic focus from the visual to verbal with surprising gaiety, and still injects his French historical drama with a lavish aesthetic, archly-sustained characters, and a fierce comic edge that leads one of the most unique depictions of 18th century France in cinema.

The desperate engineer Gregoire Ponceludon de Malavoy (Charles Berling, in his screen debut), brings his woes to Versailles. Fever has stricken his swamp-infested home district of the Dombes, and he requires a sizable grant from the King to drain the land. However, after a blunt palace rejection, followed swiftly by a brutal robbery, land him in the hands of Marquis de Bellegarde (Jean Rochefort), an aging mainstay of the court, he learns quickly that a direct plea will do nothing without a fierce social following to support it. He needs to become very clever very quickly to gain the king's ear.

As Malavoy slowly comprehends the two-faced flow of Versailles life, he must also contend with his feelings for Bellegarde's beautiful daughter, Mathilde (Judith Godreche), and the lustful advances of Madame de Blayac (Fanny Ardant), whose powerful royal influence could lead to Malavoy's remedy. Soon after, though, it becomes certain the young engineer has found his second calling in life as a courtier, perhaps to the detriment of his mission's focus, and his personal morality above all.

As is fitting with Leconte's continued insistence on tweaking convention, evident even from his early days directing comedies, the film begins not with overwrought exposition delivered by a room of stuffy costumed characters, but with a single, stark stream of urine. Delivered from the formerly exiled "Marquis de Stumblebum" to the lap of the now-decrepit man that publicly dubbed him such, the scene serves as an impeccable introduction to Leconte's unusual handling of the material. It swiftly discards the suffocating qualities of the historical setting, and instead offers a clear indication of where the film's heart lies: in the savage effect of words, and the swift retribution for those whose lives are destroyed by them.

With every line of dialogue carrying the danger of constant scrutiny, the various noblemen and women dance through dinner parties and drinks with the nimblest of interactions. Of course, nothing of importance is discussed -- matters exterior to Versailles are given only the briefest of mentions -- but in their place are dueling acts of wordplay, retorts, and paradoxes.

Screenwriter Remi Waterhouse, with additional help by Eric Vicaut and Michael Fessler, does wonders with these exchanges, which apparently were lifted from actual court chatter and memoirs. They effectively set the social and personal stakes for each character, as Leconte allows each exchange room to resonate after the success or doom that follows to resonate.

Perhaps the most impressive feat of "Ridicule," similar to the centerpiece hit single in Tom Hanks' "That Thing You Do," is that when the single in the title of that film appears, it justifies the narrative build-up, and when Waterhouse's droll dialogue materializes in "Ridicule," the feat is equally as impressive.

Along with the light-footed syllables that fly from every character's mouth, the look and tone of the film echoes levity at every opportunity as well. Both Bertrand Tavernier and Sofia Coppola recently made worthwhile strides toward breaking period tropes with "The Princess of Montpensier" and "Marie Antoinette," but "Ridicule" bests them both by switching between its classical and unconventional forms effortlessly, and more than a decade earlier than the other two. 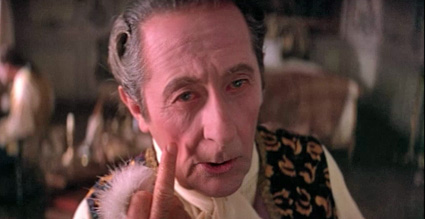 Cinematographer Thierry Arbogast ("Leon," "The Fifth Element") captures each bon mot with a steadily searching eye that follows conversations with deceptive ease, while Ivan Maussion (a veteran production designer on Leconte's films) fashions a disorienting maze of Versailles halls in which they boldly echo.

Under such a daunting screenplay, it is a strong testament to the cast that they are able to hold their ground, striking a tone nicely between intelligence and vacuity that the roles require. Sterling plays Malavoy as a rather bland commoner blessed with a sharp tongue, but also one naïve and self-centered enough to make his transition to sleazy manipulator later almost unnoticeable.

Jean Rochefort, consistently a delight with Leconte since the director's first film, "The Hairdresser's Husband," plays a man lost in his catalogues of witticisms, reliant on mind games to keep him nimble, and yet slowly coming to terms with his fading presence in the courts of Versailles.

Mathilde represents his one source of genuine optimism, and we feel this immensely from Rochefort, but unfortunately Godreche's blank performance never effectively convinces. While she's supposed to be an unpredictable devotee of science and not simply Malavoy's lover, her strained relationship with him instead feels necessary only for fixing the film's narratives. Luckily though, along with Ardant, who casually shirks revealing her clear motivation or emotions with a well-placed grin, Rochefort's tragic journey marks a more striking look at class politics, and the loneliness wrought from them, than any passionate rhetoric that Malavoy may espouse.

If at the end of "Ridicule" one finds themselves peculiarly unattached to the previous 104 minutes, then through that frustration it is likely Leconte and his team of wordsmiths have in fact actually succeeded. The vapidity of bourgeois life has been approached in many different cinematic ways, usually aiming for the contrast between boredom and opulence, but Leconte chooses rather to depict a palace brimming with life, but a life of the insincere and garish. Sadly though, the positions these people hold still remain essential to France's future, and one gets the sense from every quip spoken that hundreds of people have died as a result.

Existing as both a savage satire and loving worship of words, "Ridicule" rewards its characters with a surplus of fantastic lines, yet just off-screen there exists a majority mustering up the courage to silence them altogether. The French Revolution waits in the wings.

For a view of another Patrice Leconte films, check out fellow FFC Grace Wang's take on his 1990 film, "The Hairdresser's Husband."

Charlie Schmidlin is a writer and filmmaker from Chicago, and currently writes for the Indiewire blog The Playlist.