He wants to marry a hairdresser 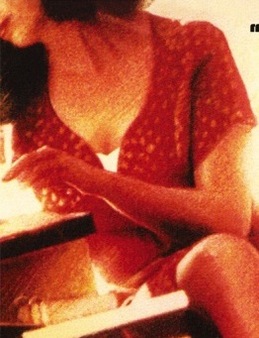 "Film is the medium that gives room to our fantasies, most of the time harmless, since they are fantasies. The cinema is often more beautiful than life, if only because we write the screenplay." - Leconte

"The Hairdresser's Husband" (1990) is a film so fantastical, so sensual, so romantic, that you can not help but sigh in ached longing...a longing that, deep down, you know is untouchable, but how good it is to be drenched so thoroughly in it in a French hairdressing salon, on sunny afternoons and stormy nights?

Dreamers. Lovers. However they came to be we do not know, and it does not matter. They are so content together, indeed so happy that they seem immune to the ravishing of life's toil. Passion consumes their lives. The day begins with it, and ends with it.

Throughout, its perfume permeates the air as sunlight streams through the window and sets her honey brown hair aflame. Her voluminous waves glowing, and the light stir as she moves, from the counter to the door, to the shampoo to the chair, to the door as the customer leaves, and she returns to her counter. The light and perfume stir with each step, whisper between them, around them.

He watches from the red sofa, knowing full well that this is exactly where he wants to be, where he should be. She looks up from the counter, a wordless smile passes between them, shared, stretching on like hot caramel with the passing of daylight. Little smiles and glances of joy spill unabashedly, so over-brimming of hearts that they drip like pearls with the streaming light, and are finally gathered again at the end of the day. Dusk falls, the door closes after the last customer. She hikes up her dress and unbuttons her blouse. He stands up from the red sofa. Passion leads day into night, and then begins all over again. 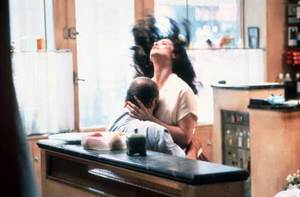 He is Antoine (Jean Rochefort), and we watch his whole life solidify in front of our eyes. Growing up, he was a curious little boy with a peculiar sense of rhythm. He dances to middle eastern melodies urgently, shaking his limbs spasmodically to the beat as he pleases, as if through the movement he makes sense of life and its joy. His other joy is going to the hairdresser, Madame Schaeffer, a middle age woman with voluptuous curves and creamy skin. Standing in front of her, he is a tiny creature, though that does not hinder his fascination with her body, her smell, the feel of her hands through his hair as she washes it. Perhaps he senses vaguely, even as young as he is, that there is something in a woman's touch that is important to be understood, to be wanted and valued. One day, a most fortuitous moment presents itself: an unclasped button in her blouse catches his glance, and reveals the object of that vague desire he harbored. Some things in life do not require much explanation. Naturally, he decides right then and there to dedicate the rest of his life to the pursuit of that desire.

She is Mathilde (Anna Galiena), and we walk into the midst of her life. A beautiful, beautiful mystery. She is a lone hairdresser. In her pressed white dress, she glides through the salon, greeting customers, gently grooming each of them, allowing them to emerge polished and soothed. So goes a tepid life. One day, Antoine spots her across the street, and is immediately entranced. He walks in and asks for a cut. She responds that she has a pending appointment, and to come back in half an hour. He obliges, and watches from across the street. No one comes. No matter. He re-enters after 25 minutes passed. That is all they will ever spend apart. In the midst of the cut, he asks her to marry him. She carries on without aflutter. Did she hear him? What was she thinking? They part ways as if nothing ever transpired. Though he knew that he needed to have her. Two weeks later he returns, and she stops him: Did you mean it when you asked me to marry you? Before he can answer and with a slight quiver in her voice, she continues: If the offer still stands, I will marry you. 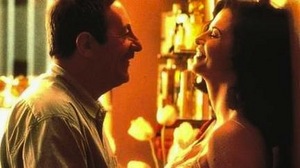 "I don't like sports or traveling," he says. "I don't like going out either." "I'll do the shopping and correspondence." "There is a small flat upstairs." "The past is dead." "Absolutely." Just like that. They settled all the minuscule details of their passion, and left only the grandiose to simmer from then onwards. Even on their wedding day, when a customer walks in unknowingly, Mathilda graciously performs her vocation in her wedding dress, radiant all along. The man becomes startled by his own appearance after a shave, perhaps seeing his real self for the first time -- a problem that never plagued Antoine and Mathilda. They both knew what they wanted. They saw their life together for exactly what it is: a willing nest of self-entrapment; A cocoon of self-invented paradise. She is perfection in his eyes, immune from rigors of social conventions: "lose half a pound and I'll throw myself under the bus." His adoration is perfection in her eyes, and she doesn't trust it: "Promise me, the day you don't love me anymore, you won't pretend to."

Their love began without hesitation and continued without interruptions. It is an all-consuming love. Any potential intermediary is brushed aside. No children to deform Mathilda's smooth belly. No friends to bridge the non-existent gulf between them. They are happy together, and that is all that matters. 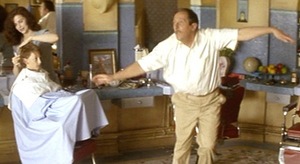 "One day I'll buy a lottery ticket. Just one. I'll hit the jackpot. We'll cruise down the Nile. We'll dance on a paddle-steamer, from morning to night, together. Watching the sun go down behind the pyramids!" He dreamed.

Mathilda hugged him tight, trying to crush herself into his luminous vision, but she never fitted completely. She was the cloud to which his silver linings embellished. Her natural melancholy and grace that attracted him so fatally were her own fatal folly. They never could be washed away by his quirky dances and adoring gazes, no matter how sunny they were.

His folly is his greatest strength. He has always lived in accordance to his one, intense, focused desire: to marry a hairdresser. Lucky for him, he understood the key to his happiness at an early age, and followed it to unlock its door. Mathilda, on the other hand, came upon hers by accident. "I've never felt like I belonged with anyone," she confessed. Now that happiness is within her grasp, she is as unsure about its potential departure as she is about its surprising arrival. In a way, Mathilda was dealt the less fortunate hand by fate, because she alone was aware of the threat of imperfection. Antoine didn't see it. Perhaps he was willingly blind to it. To him, this is life as it should be, the life he has always dreamed of, the life that he attained, and for him there would be no other way, ever.

In the end, the perfection that drew them together was the one that separated them at last. Tiny threats materialized: the gloom of aging, the hint of a storm, visions of domestic displeasure, a single quarrel. Threats of unhappiness floated like mirages on a summer day, visions of something that seem so real and yet so far, so far and yet so real. However, there they are, hanging. Is perfection destined to be temporary? What happens once we have reached that perfected state? Can there be anything but loss and decay? Will the disgust of life inevitably catch up...one day?

"The Hairdresser's Husband" sweeps us away with not just its words, but its colors, its light, and its unmistakable eroticism. Eroticism is about what people think, not what they see. As the eye behind the camera, Patrice Leconte leads us with visions of what he sees, and leaves us with more of what he does not. With steady hands and voyeuristic angles, he evokes a sea of sensuality that ripples endlessly:

"Eroticism is, always, a subjective and personal vision and perception of things. I don't think there is a universal eroticism. There is a form of sensuality, desire - conveyed through some attitudes, some looks, clothes slightly yawning..tiny things most often, because I believe all comes down to a very simple principle: the oncoming of desire is infinitely more provoking than the acting out of desire."

Anna Galiena, with her red lips and crimson dress, made the world fall in love with a coiffeuse. And how could it have been any other way? Though it was revealed in an interview that she almost did not take on the role: "I didn't think I could do it. I am very clumpsy, very nervous, very modern. I had to act to be this woman...couldn't think of how to speak, how to be her." When she finally convinced herself, it was with the notion that she was such a hopeless actress that she may as well just try it to prove that she can't act, and then "it'll be over." Of course, she was wrong, despite being so right in every other way. Interestingly, this absolutist and idealist quality - that it is all or nothing, that it is worthy to die for a dream - seemed to echo within both her and Mathilda, and translated so beautifully onto screen. And Leconte matched that idealism. He asked her to prepare nothing before coming to Paris. He wrote her letters. He sent her a piece of music. On the set, they talked about sunsets.

Luminous and sunny, tragic and inevitable, is "The Hairdresser's Husband" a fantasy? Leconte answers sincerely:

"My film is as realistic as a naive painting, a miniature, a good painting can be realistic. Nothing leads us to assume we are confronted with a pure fantasy. But if somebody wants to see it that way, why not?" 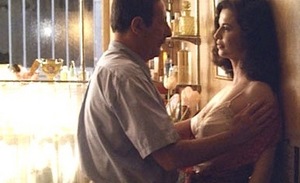 Leconte says that he worries about Antoine, because after reading Mathilda's note, seeing her body, knowing full well that she is gone from this world, he still tells a new customer that "the hairdresser will be back." But then again, why wouldn't he? Not even his dad's abrupt slap at the dinner table at 12 years old persuaded him any different. Staring up at the ceiling, young Antoine told himself right then and there, with full confidence, that "I had won. I would be a hairdresser's husband."

And so he was. Every day since. Every day with Mathilda. He was. And in his own luminous and sunny world, he always will be.