Imagine a time when all compliments are two-faced, when every truth is tinged with irony, when insults are the currency of humor. We have more in common with the 18th century than we might imagine. “Ridicule” is a movie that takes place at the court of Louis XVI, circa 1783, but its values would be at home around the Algonquin Round Table, or in modern comedy clubs. Wit is all. Sincerity is an embarrassment.

The movie tells the story of a provincial baron with a scientific cast of mind. The people of his district are dying because of the pestilent waters, which breed mosquitoes and disease. He has a scheme for draining the marshes and making the land tillable. He needs the help of the king, and so he journeys to Versailles to press his case. But the king values verbal wit above all, and lives mostly to be entertained. If the baron cannot develop a savage tongue, he has no chance.

The baron, named Ponceludon de Malavoy (Charles Berling), is, like all provincials, inclined to give his rulers credit for being better than they are. In Versailles he witnesses shocking displays of public humiliation, which are all part of the game. He seems to have no chance at all, but then he is taken under the wing of the wise old Marquis de Bellegarde, played by Jean Rochefort, that tall, long-faced master of sly intrigue. “Be witty, sharp, and malicious,” the marquis tells him, “and never laugh at your own jokes.” The baron somehow stumbles into success; his honesty plays like rudeness, and he doesn't laugh because he doesn't know he has told jokes. He gains admission to court circles, where he finds that in romance, as well as politics, wordmanship is more crucial than swordsmanship.

In “Ridicule” the characters are faced with the exquisite torture of seducing one person while desiring another. The baron quickly falls in love with Mathilde (Judith Godreche), the kindly marquis' daughter, and she with him. But she is determined to marry a distasteful old rich man (they are only waiting for his wife to die) so that he can finance her research into diving bells. Meanwhile, the baron, for matters of expediency, pays court to the powerful and beautiful Madame de Blayac (Fanny Ardant), who can do him good at court.

She likes him. Well, he likes her. She understands almost everything about the motives of the people in her life, and at one point, while he is going through the motions of wooing her, she looks at him in amusement and advises, “Learn to hide your insincerity, so that I can yield without dishonor.” After all, she is not a woman without stature; her own official lover is the abbot de Vilecourt.

The kind old marquis sees all and keeps his counsel. He does not have the money to support his daughter's research, and sees how much she treasures her diving bells. He rather prefers the baron as a son-in-law, but realizes that no swamps are going to get drained that way. And the king? He has peepholes installed so that he can secretly observe the real goings-on in his court, the better to savor the ridiculous posturings of his petitioners when they come into his presence.

“Ridicule” reminded me of the equally fascinating “Restoration” (1995), with Robert Downey Jr. as an ordinary man embraced by the king after he treats his beloved dogs. It was set a century earlier at the equally colorful but somewhat less mannered British court of Charles II. Both films show a monarch using his personal style to set the agenda for his nation, and both are about lifestyles as a work of art. Both, too, are about simpler men from scientific backgrounds, who find that being straightforward gets them points at court that they haven't really earned.

What is fascinating about “Ridicule” is that so much depends on language, and so little is really said. The characters come and go, polishing their one-liners, memorizing their comebacks, desperately walking the line between delectable rudeness and offending the king. None of what they say means anything. It is all words. The eyes carry the meaning. Watch the way the characters look at one another, and you can follow the real plot, while they spin their tortured fancies. 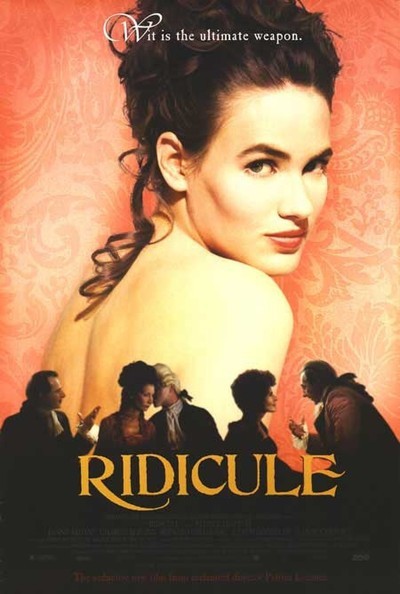 Rated R For Graphic Nudity, Some Sexuality and Brief Violence