The boy who played chess with life 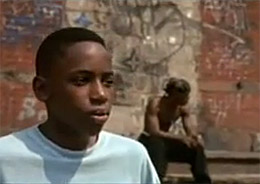 In the middle of Boaz Yakin's "Fresh" (1994), there is the crucial scene that gives us the insight into its hero's plan. While playing chess with his father, he learns a lesson. And then he applies its logic to the real world for his own purpose. However, in the world case, the game is not a simple matter of win or lose. A small false move can result in not a mere checkmate but a dour outcome for him. And (this is one of the most interesting aspects of the film) he is only a 12-year-old kid. He can do it, and we know that, but can he endure to the end? 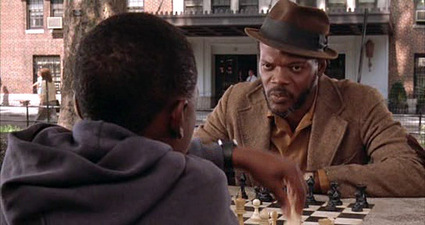 Yakin's film is a riveting story that looks at the grim reality of a urban ghetto area through the disillusioned eyes of that kid. With a calm, steady attitude, it shows us the harsh environment that has influenced him. There is little hope inside him for a better life, but that seems more like a small, temporary consolation in his frustrating existence. Violence can burst out anytime, and, even though he is a jaded worker in the crime world, he is dumbstruck to see what suddenly happens right in front of his eyes. While following him, we eventually see the reasons behind his scheme to retaliate on this world causing him lots of pain, anger, and frustration. It is gripping to see how he manipulates others for his ultimate goal -- and it is also harrowing to observe what he has to sacrifice for that. 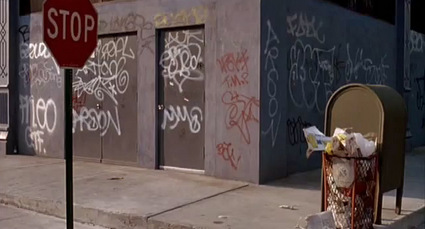 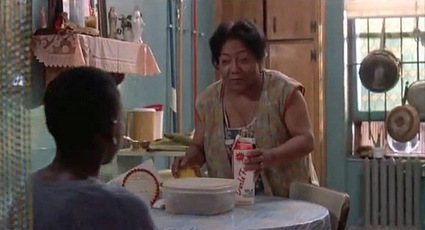 Starting from the opening sequence where background details are filled up one by one in the open space, the movie depicts the daily life of Michael (Sean Nelson), nicknamed "Fresh" by the people close to him. His life is not easy, but it could have been worse for him. Because he was separated from his parents for unclear reasons (he is not allowed to meet his father, and his mother probably died in the past considering the conversation between them), he could have been sent to a group home. Fortunately, he has a benevolent aunt (Cheryl Freeman) who can take care of him as well as his 11 cousins at her small but relatively neat apartment in the public housing project in Brooklyn. The home is crowded with the cousins who are mostly indifferent to him unless their welfare is concerned, but it is certainly a lot better than the group home nobody wants to go to. 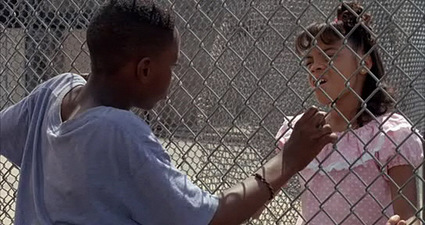 At school, he has several friends his age he can hang around with. His best friend is Chuckie (Luis Lantigua), whose loquaciousness contrasts with Fresh's reticence. One day, Fresh notices one of the schoolgirls, and she notices him, too. Their interaction with a wire fence between them is one of few small warm moments in the story.

But he is far less naive than others. He works a runner/pusher for the drug lords in the neighborhood. He is sometimes late for school while delivering drugs in the morning, but he has managed to hide his criminal activity from others except his friends. He is clever; he knows it's prudent to be quiet and honest in front of the people he works for, and the drug lords trust him and favor him because of that. When they are with him, they are like the seniors cordially recognizing a young junior who may follow their footsteps and "be the man". One of them, Esteban (Giancarlo Esposito), regards Fresh as his protégé; he personally promises him the future in his business. 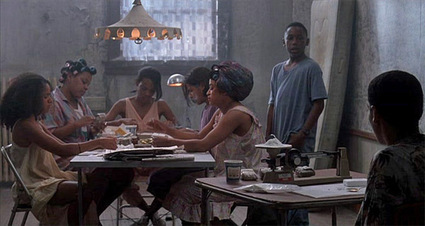 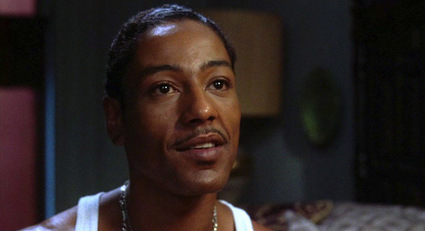 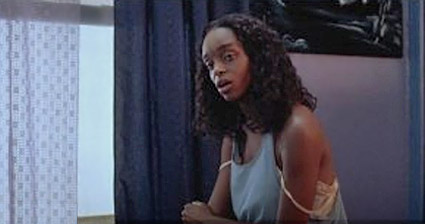 Fresh has other thoughts. Above all, he yearns for getting out of his neighbourhood. In fact, he has a considerable amount of money hidden in his private place. But his life is still stuck where he has been all along. In addition, his sister Nicole (N'Bushe Wright), one of few people he cares about, is mired in drug addiction with and low self-esteem. She gives herself up to anyone who provides drugs for her.

The director, Boaz Yakin, who also wrote the screenplay for his first movie, moves his story at leisurely pace during the first half in establishing the relationships between his characters. Sometimes we do not know all about their relationships or their past, but they are interesting characters, and it is compelling enough to observe them. Even when they say nothing, we can see what is happening between them. With the help from the cinematographer Adam Holender ("Midnight Cowboy"), Yakin gives his film the authentic atmosphere with some occasional realistic beauty, such as when Fresh spends his time in his private place while looking at the city beyond the railroads.

After everything is placed on the board, Yakin puts them into the thriller formula with an apt metaphor for what happens next. After witnessing a tragedy caused by senseless violence, Fresh decides to do something as retribution. He gets a main idea from his alcoholic father Sam (Samuel L. Jackson), whom he occasionally visits in the park. 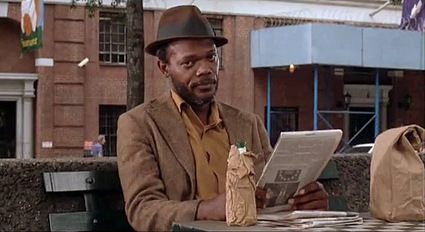 Sam spends most of his days in the park while earning money for his beer with speed chess. He is an intelligent man, and he has taught his son speed chess while also giving him some life lessons through his teaching. In the crucial scene mentioned above, while playing chess with his son as usual, he imparts a lesson to him; "You're playing each piece like losing it hurts. They ain't checkers. You want my king. You got to come get my king. All these other pieces are just the means to do it." (A small trivia: Bruce Pandolfini, who is mentioned by Sam along with several famous chess players, was a technical advisor in this film. He was played by Ben Kingsley in "Searching for Bobby Fischer" (1993), another movie about a smart kid good at chess play).

That lesson is literally adapted to Fresh's strategy. He sets the board, places the pieces on it, and starts the play. It is not a fancy behavior at all. He gains the detachment necessary for executing his scheme, determined to use anything or anyone. For now, they are no more than the pieces on the board. He manipulates others into the situations prepared by him, and then he watches the outcomes with caution while holding himself for the next move.

Now this sounds like those simple thriller movies in which a clever good guy outsmarts and eliminates bad guys with the ending waiting for him. No, I do not criticize those because some of them are entertaining on their own, but, while maintaining an unhurried pace with Stewart Copeland's equally calm orchestral score, "Fresh" goes far deeper to reach to the level of complex thrillers driven by characters. Though most of what he does are manipulations and lies, Fresh actually plays a dangerous survival game using others near him. In one case, he exploits one of them without that character's knowledge. As a consequence, though it was not in his plan, he leaves him to get shot because he has to move on by any means necessary. One brief scene later tells us he loses more than one relationship as a result.

He has to harden himself further, for vulnerability is something fatal on his mean street. On his DVD commentary, Yakin says that he insisted on keeping a painful scene involved with a fighting dog Fresh cares about in spite of the objections of the producers. While the other violent scenes are handled with restraint while focusing on their aftermaths, this painful scene feels like gratuitous violence in comparison, and many people in fact asked Yakin the reasons behind it after watching the movie. At first, I thought Fresh has a good reason to kill the dog. He found it on the street, and he does not like when it is put into a dogfight. But does he really have to do it so cruelly? Now, after listening to Yakin's short explanation, I begin to discern the motives behind his deed. Considering what happened to him before that scene, and what he will do next after that, it is a logical step to him. 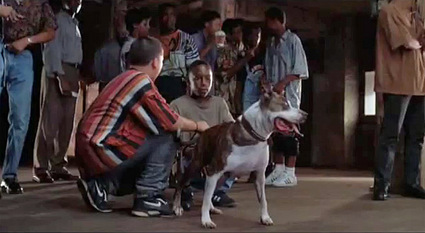 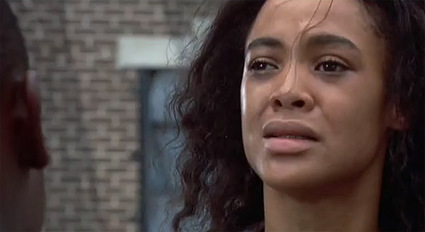 Sean Nelson's electrifying performance is both the key and the lock to his character. Although he was around 13 years old during the production, he did a marvelous job; he masterfully balances his character between toughness and innocence while revealing little from his detached face. On the streets, he can be a pragmatic pusher who coldly responds with contempt to a desperate addict without money. At school, he is a normal elementary school kid who tries to draw the cheerleader girls' attention with his friends in a funny way. He usually keeps his thoughts to himself amid criminals, and that attitude becomes more essential while executing his plot. But he is still a child, and he observes the penultimate step of his scheme played out from the distance with objectivity and a candy bar, as if he were watching some violent play staged by him. Nelson has diligently continued his acting career after this movie. He held his place between Dustin Hoffman and Dennis Franz in "American Buffalo"(1996), and gave a good performance in the HBO TV mini-series "The Corner"(2000).

Among the good supporting performers in the film, it is easy to recognize Samuel L. Jackson, who was then recognized more widely thanks to the success of "Pulp Fiction." Though he is less prominent in the movie than its DVD cover design suggests, he imbues every scene he appears with that familiar authority; you can sense how much Fresh needs Sam as his mentor, if not his father. On the opposite, Giancarlo Esposito gives a nice performance as another mentor figure in Fresh's life. Esteban has sleazy side, but he is not entirely a bad man, and he gives Fresh some advices including the ways to survive in his business.

One of the reasons why "Fresh" still feels timeless is that, sadly, the reality reflected through Fresh and his story has not been changed much. While watching the film, I was reminded of HBO TV series "The Wire," whose fourth season devastatingly shows how the lives of the school kids around Fresh's age are shaped by the crimes in their slum neighbourhood. And I remember the article written by the Chicago Sun-times reporter Frank Main, who won a Pulitzer Prize in this year. It was about a shooting incident in Chicago neighborhoods. It said that, not so surprisingly, nobody wanted to help solve the case -- not even a dying victim himself.

The movie is a terrific thriller guiding us into a reality such as that. It tells us how it hurts Fresh. It also suggests how fighting back against it equally hurts him. The powerful final scene reveals everything that has been accumulated inside him throughout the story. He does not say anything, but, from his face, we see what he has lost while going through the perilous situations even the adults cannot easily get away from without the cost. His father told him that anything lost can be found again except the time wasted, but he now knows that there are also other things that cannot be found again. And he is only a 12-year-old kid.