Somewhere between heaven and hell 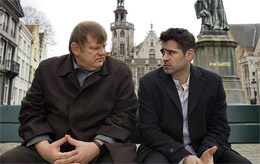 When a great influential film comes out, we usually get a backlash of cheap knock-offs. After James Cameron's "Titanic" we suffered through Michael Bay's "Pearl Harbor." When "Pulp Fiction" came out people praised its genius but its influence drove the genre to a creative blockage. Everybody wanted to be the next Tarantino. Directors probably asked themselves "What would Tarantino do?" before violating their own originality. Like most imitations, of Rolex watches or anything else, they look the same but don't work the same.

With "In Bruges." it feels like Martin McDonagh opened a window in a room where the air has been recycled endlessly. For his directional debut is a true work of originality. It strikes a balance between humor and drama and adds a rare layer of philosophical undertones to the genre. It has something new to say and so the experience is a rewarding one.

The films begins with Ray (Colin Farrell) and Ken (Brendan Gleeson) walking in Bruges, "the most well preserved medieval city in the whole of Belgium." We quickly learn that both are hitmen who are hiding out. Bruges is the last place you would go to look for somebody. Heck, I never heard of this beautiful place before watching the film. Anyway, this is where where you stop reading if you haven't seen this film yet.

Ken is the wiser of the two; he's quiet, well mannered and smart. He is also fascinated by the old buildings, the architecture and the history of the city. Ray, on the other hand, is bored out of his wits. He can't wait to go back to Dublin and is frustrated that he isn't hiding out in London. We later learn that the reason they are hiding out is because Ray accidentally killed a young boy on his first job.

McDonagh says the inspiration to make the film came from when he was stranded in Bruges. He thought the city was beautiful with a fascinating history, but he couldn't stand the boredom. This split opinion is what gave birth to both characters in writing and it is simply brilliant how their views differ on everything from life to death. "In Bruges" is one of those films instantly elevated to cult status through countless quotable lines. The one-liners don't feel scripted, the delivery is hysterically natural. 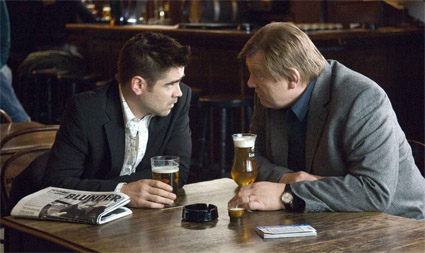 The scene comes in the form of a six minute long take. Ken is sitting in his hotel room and the famous opening shots of "Touch of Evil" can be seen on television in a nice reference. He answers the call and it's Harry. After some humorous chit chat involving an imaginary Ray leaving the room to go bowling, Harry asks him if they're having a good time. At first Ken answers him honestly saying that he is but it's not really Ray's cup of tea. A moment of silence later Harry flips out and shouts "How can a fairytale town not be somebody's fucking thing?" Ken then retracts his words to save his friend. He even goes a step further as we see him smile and hear him making up a story involving Ray describing how he loves Bruges. "You know what he said to me the other day? I know I'm awake but it feels like I'm in a dream." Harry buys it and cuts the chat by instructing him to kill Ray for what he's done.

At the beginning of the film it looked as if Ken and Ray couldn't stand one another, but by the time the phone call arrives their friendship has developed into brotherhood. Ken's smile fades away and his face goes blank upon hearing the order. Afterward, Harry asks Ken to repeat to him what Ray said about the swans in Bruges. The words are the same but the delivery is different. The first time he said those words, there was humor in them, but now he actually means it. "I know I'm awake but it feels like I'm in a dream." McDonagh's original screenplay was deservedly nominated for an Academy Award.

I never thought I could sympathize with a child murderer. Even though the child's death was an accident, it's still extremely difficult to feel compassion and empathize with an adult who has committed such a terrible crime. What distinguishes Ray from psychopaths is the fact that he doesn't attempt to rationalize his sins. Instead, he plunges into a state of depression and a torturous emotional experience, guilt. He knows he violated moral standard and understands that only punishment might cure his guilt. In a touching scene that demonstrates Farrell's true acting ability he wipes off tears from his eyes and says "He's dead because of me. And I'm trying to... been trying to get me head around it, but I can't. I will have always have killed that little boy. That ain't ever going away. Ever. Unless... maybe I go away."

The characters in this movie are as human and fully fleshed out as it gets. McDonagh is a student of human nature, his writing is sublime. Ray occasionally seems like he's happy. For the briefest of moments you see him laugh smile or enjoy himself but then guilt pulls him back to his depressive state. Before going out on a date he looks at himself in the mirror. A sad facial expression forms as he studies himself. It almost looks like Ray doesn't think he deserve to enjoy this night. After a wild night involving hookers, booze, and cocaine, he wakes up the next morning sunken into misery. Laying in his bed a tear slowly forms in the corner of his eye and trickles across his face.

I can't imagine how it must feel to carry guilt of this magnitude around every second of one's life. Imagine the guiltiest you've felt in your life and multiply that by a hundred. That's what it does to you. It eclipses your life as you know it, paralyzing and putting a stop to everyday pleasures. Eventually, nothing is left but a single desire. Ray is left with a choice; he can either continue living this devastating life or put an end to it. Ray chooses the latter. That very morning he gives all the money he has left to the pregnant receptionist and sits in front of a playground to feed his guilt, sink deeper into depression and find courage to commit the inevitable.

"In Bruges" is a film that evokes the feeling of guilt better than most motion pictures. It knows that it brings out the humanity in us and recognizes that guilt can drive us to the darkest corners of the mind. Each time I watch this film I ask myself the same questions. Is punishment the solution to getting rid of guilt? Can guilt change us for the better? If so, wouldn't it be a form of rehabilitation? Does Ray really deserve to die for what he has done?

That last question is the conflict that turns two friends against one another. Both Harry and Ken have different principles and are dedicated to what they believe in. Harry believes Ray should die and Ken believes he has the capacity to change and deserves a second chance. I couldn't help but admire how McDonagh put Ray's life in the hands of both of these wise characters. It's almost as if Ray doesn't have a say in this, he even fails to take his own life. Ken is his guardian angel, Harry is a grim reaper like figure seeking justice and all three are in purgatory.

For some reason the idea of waiting for judgment in an unknown land is a common theme in philosophical Irish literature. Like in "Waiting for Godot" these characters are in a place they're not familiar with and all three are waiting for the moment of truth. Bruges is symbolic of purgatory. They're trapped in the city waiting for their inevitable fate. This is hinted upon several times during the film.

When Ray and Ken visit a museum they stumble upon "The Last Judgment" painting by Hieronymous Bosch. "Purgatory's kind of like the in-betweeny one. You weren't really shit, but you weren't all that great either." Notice how similar Bruges is portrayed throughout the picture. On the one hand it's a "fairytale town." On the other it's a shit-hole. Maybe it's in-betweeny.

Fiennes never fails to mesmerize me in villainous roles. His portrayal of Harry is so different from the iconic Voldemort in "Harry Potter" and the ruthless Amon Goeth in "Schindler's List." Here he's like a loaded gun always a tick away from losing it, but he's also an honorable family man with principles. Ken's death is more ironic. After constantly convincing Ray not to commit suicide, he jumps off a tower, only he does it to save Ray's life. It's too late to save himself but here's still a chance to die doing one last good deed. When his body splashes all over the sidewalk, Ray rushes to him and cries upon realizing it's his friend. "Take me gun," he utters. I've seen thousands of people dying in a lot of movies, but I've never quite see anyone capture that last moment as perfectly as Gleeson does here. Notice his eyes. They stare, struggle to roll, and then return to their original position, the pupils dilate and all his facial muscles relax instantaneously. Gleeson's acting is Oscar worthy. As for Ray, we never find out what happens to him. He walks into a surreal filming location that resembles the Bosch painting we've seen earlier and gets shot several times before dropping to the ground.

It's an open ending and you can look at it either way. I know that the last shot is fixed on bright neon lights in the ambulance and then the screen fades to black. I'm sure this was a symbolic choice but viewers who complain about the open ending miss the point of the movie. For me, "In Bruges" is one of those rare movies that end at the perfect moment. One can easily miss the real conclusion here. It's not whether Ray lives or dies. The last words of narration are as follows, "I really really hoped I wouldn't die I really really hoped I wouldn't die." Ray is no longer suicidal and finally found the will to live. That is what's important here, Ken didn't die for a lost cause.