Running from your memories 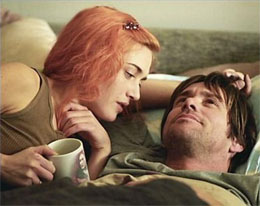 Every couple of years I stumble upon a film that transcends its traditional entertainment purposes and goes for something more divine, ambitious and philosophical. When a film like this comes along, it reassures me that film is indeed the greatest art form of our time. Movies that had that awe-inspiring effect on me include: "Last Year at Marienbad", "The Exterminating Angel", "Persona", "2001: A Space Odyssey", "Dark City", "Enter the Void", "The Thin Red Line", "Eyes Wide Shut" and "Synecdoche, New York". I like to call them life-changers.

The first time I watched Michel Gondry's "Eternal Sunshine of the Spotless Mind" it felt like a life changer. I remember the night I saw it, too. I couldn't sleep all night due to perpetual thoughts rushing through my head. I used to experience that during the last minutes of an exam I couldn't finish on time. That night, I needed more time to grasp the film's brilliant originality and fascinating implications. The second time I saw it, I had a few friends over and it wasn't as impressive. Now, six years later I've given it another shot. Surprisingly, it had that same initial effect on me. This almost never happens to me, and I think I understand why it enchanted me the first and last times. It is one of those rare films, I'd rather watch alone than with an audience.

It reaches for something personal like troubling memories buried deep in our psyche. It is a film that demands the presence of thoughts we put aside when surrounded by people, things we only think about when we're alone, buried in everlasting thoughts. "Eternal Sunshine of the Spotless Mind" is the rarest of all films, a therapeutically liberating work of art. 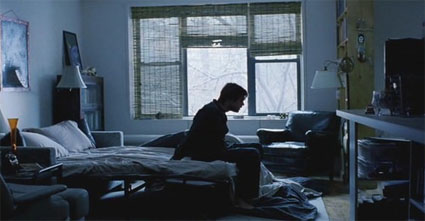 Charlie Kauffman's marvelous screenplay revolves around Joel (Jim Carrey), a soloist stuck in the repetitive formula of everyday life till he meets the spontaneously carefree Clementine (Kate Winslet). Their relationship escalates into a supposedly dead-end when he learns that she had him erased from her memory. Furious and confused, he contacts the inventor of this advanced process, Dr. Howard Mierzwaik (Tom Wilkinson). Out of sheer desperation he resorts to the only logical solution at the time, removing her from his memory as well. But as he re-experiences the passionate days of their earlier relationship, he falls in love with her all over again. 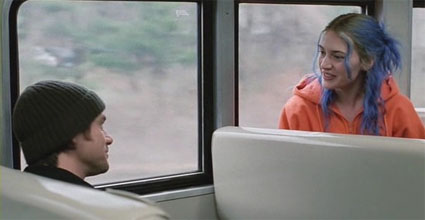 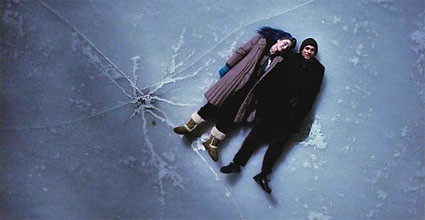 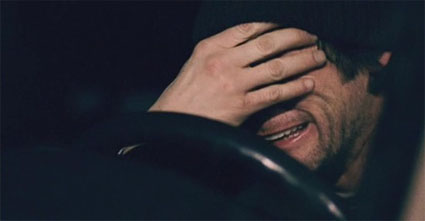 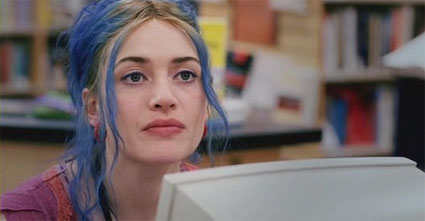 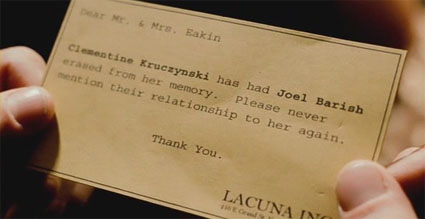 The film then takes a Hitchcockian turn and becomes a man-on-the run film, only this time the protagonists are running from an untouchable entity. They race from one memory to the next desperately escaping the inevitable erasing process. It's one of the most original and fresh ideas ever shot on film. If you haven't seen this modern masterpiece, I strongly suggest you stop reading at this point, as I will explore some of the film's more thought provoking themes.

One of the philosophical questions this film asks is whether we are merely the sum of our memories or if there's more to us than a summation of past experiences. Would erasing an incident from our micro-history do us any good? Would a woman erasing the memory of a rape make her happier or would removing the incident do more damage to her life than the actual incident itself? Hence, she wouldn't have learned anything from it or become the stronger person she is today. Is ignorance indeed bliss?

The film ultimately arrives to the conclusion that no, having a spotless mind does not bring eternal sunshine. You may forget a past memory but you can't forget the impulses, instincts and emotions that arose from that past incident. They are in some sense untouchable because they shape who we are. Take for example, the simultaneous subplot involving Mary (Kirsten Dunst) discovering that she had her love affair with Dr. Mierzwaik erased. She arrives to that discovery through her love to him. The weak link in Lacuna's process is that it successfully erases memories but can't erase feelings. 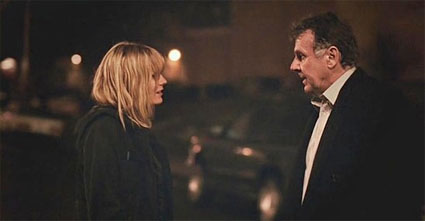 Another heartbreaking scene that explores the system's imperfection is when Joel and Clementine finally bid farewell inside his head. She leans in and whispers, "Meet me in Montauk." You see, the Clementine guiding his escape is merely a projection in Joel's mind. She represents his will to hold on and he does so through what he knows of her spontaneous personality.

When they challenge the erasing process by hiding in childhood remembrances and other "off the map" memories, the escape route is always suggested by Clementine. Joel would never arrive to such conclusions himself, but he subconsciously asks himself what would Clementine do and acts upon it. So when she whispers that final line inside his head, what he's really doing is implanting an impulse; something Lacuna can't touch.

The film opens with a post-erasing scene. On Valentine Day, Joel feels the impulse of going to Montauk instead of working and there he meets Clementine. She too implanted that impulse during her erasing process and it's such a beautiful encounter. That cold day on the beach, they fall for each other all over again. Both Joel and Clementine do in fact win at the end, implanting that impulse defeats the system in a final attempt of desperation. 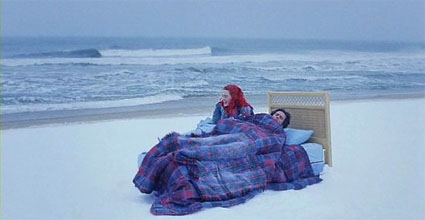 In that "second" first encounter, it's almost like a hidden magnetic force pulls them together. This is portrayed cinematically through brilliant use of music. Music plays when they talk and pauses when they pause. Joel and Clementine click in a disguised coincidence, a natural encounter.

In another simultaneous subplot, Patrick, one of the Lacuna technicians, uses the dialogue he knows from Joel and Clementine's real initial encounter to sweep her off her feet. The plan backfires on him and only fuels her confusion and anger. I believe that we as human beings have an uncanny ability to detect bullshit and truth in words. We think spoken words is the only way of communicating but there's an invisible energy that comes from body language, the way we say things, and the way we look at a person that tells us if there's any truth in what is being communicated. This energy is something beyond what we hear or see; it's something we feel, a feeling of truth.

My favorite scene in the film is when they're stuck in their first memory, which is also the last memory they helplessly witness getting erased. Both characters recite some of the dialogue of his memory, but occasionally, Joel becomes self aware, looks at Clementine and pours out his commentary thoughts. As they sit in front of the ocean, she looks at him and says, "This is it Joel, it's gonna be gone soon." A sad smile eclipses his face when he replies, "I know." But it's the last exchange that really hit the mark with me. "What do we do?" she asks. To which he replies, "Enjoy it." Joel gives up fighting instantly and chooses to enjoy the little time they have left together and it's utterly heartbreaking. 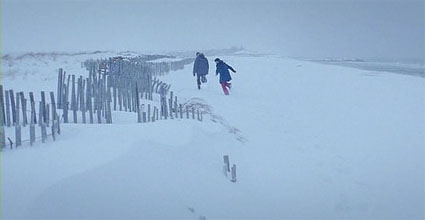 Ironically, this reminded me of one of my childhood memories with my dad who's a doctor of nuclear medicine; it's when they use nuclear energy in a positive way to cure cancer. I remember when he told me that not all cancer patients choose to fight the disease and there's nothing he can do about that, it's their call. As a young kid, I couldn't get that through my head. It just seemed inconceivable at the time. Whatever reasons they may have, I think it's their right to do so. Whether it's never-ending surgeries that constantly fail or hectic chemotherapy that leaves them miserable in their potential last days, it's their right to let go and enjoy the little time they have left in this world.

Letting go is one of the hardest things a person can do. It doesn't mean they're giving up, it means they're moving on. We hold on to things we value as if they will cease to exist when we let go. The truth is they won't. Letting go or giving up isn't an act of cowardice; quite often it's an act of supreme bravery. "Eternal Sunshine of the Spotless Mind" tells us to accept things as they are and make the most of what we have when all hope is lost.

I remember seeing my dad sitting on the living room couch as he watched the news. He's one of the most positive and cheerful people I know and it often puzzled me knowing what he does for a living. I asked him if dealing with dying people on a daily basis is a depressing job. He replied something along the lines of "We tend to keep a lighthearted environment at the hospital." When I asked him if breaking the bad news is the worst part of his job, he told me that it was, but every once in a while he breaks out great news and it makes it all worth it. The ups and down of life apply everywhere. In the case of this film, it's in a relationship. As Joel discovers throughout his mental journey, the ups are sometimes worth all the downs.

After a break up, the very memories you once cherished, the ones that drew a smile on your face whenever you remembered them seem none existent. That's probably due to the recently bad incident towering and blocking all things wonderful from your thoughts. I think it's an act of self-preservation to let the bad memories stick and allow great ones to slip through our fingers. It makes moving on easier.

After Joel and Clementine learn they've had their memories erased because things just didn't work out, they somehow choose to travel that same road again anyway. I think it's a perfect ending to a perfect film. As we're so often told, it's about the journey not the destination. They know what is waiting at the end of that road and they choose to walk through it anyway. The journey has been erased and therefore, they choose to re-experience it. Perhaps it's to arrive at that conclusion because that's the only way they'll understand the nature of their previous destination. Or maybe, they share a tiny ounce of mutual hope. After all, they know the pitfalls and hidden traps on that road from listening to their Lacuna tapes. Dodging them is all that needs to be done to arrive at a different destination. This is precisely how second chances are meant to be taken.

Whenever, I watch this film it steers my eyes away from the empty half of the glass of water and makes me acknowledge that there's a full half right below. For that very reason, I'm eternally grateful for its existence.

"Tears, idle tears, I know not what they mean, Tears from the depths of some devine despairRise in the heart, and gather to the eyes, In looking on the happy autumn fields, And thinking of the days that are no more." - Alfred Tennyson

"Two roads diverged in a wood, and I, I took the one less traveled byAnd that has made all the difference." - Robert Frost