Michael Mirasol from Manila:WALL-E is the best film of the decade 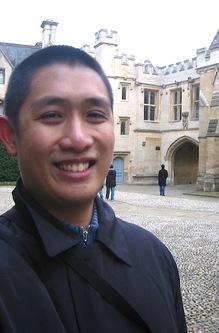 I was born on February 6, 1975, into a quiet family in San Juan, Metro Manila (Philippines). I barely remember anything in that time before we moved at the turn of the 80s. From what I recall, I grew up in a fairly middle class neighborhood, but my mother would tell you that we were always poor. Thanks to mom and dad though, it never felt that way.

My mother grew up in much harder conditions, having only a pair of shoes to walk several kilometers to get to school in the province. Though she was a local beauty, she was smart and tough, working hard all the way to high school. Once she got the chance to move to the city to study at the University of the Philippines , she never looked back. It was still pretty tough for her even after she finished, helping support her 6 sisters. But she did find her way to work as a secretary for several government offices.

My father grew up in the same kind of environment (same province, Bicol region) with his three brothers. He told of childhood memories dating back to the

Japanese occupation of the Philippines during World War 2. He too was tough, but with a razor sharp intelligence. He was a slacker in high school and in his early college days. But then he discovered the military, joined the Philippine Military Academy, and applied to both West Point and Annapolis. His preference was the army, but he got his entrance exams results first for the Navy, which he aced. Just as he was preparing to leave for Annapolis, he received his results from West Point. He aced them too.

After graduating with the highest ranking among any Filipino graduate at that time (don't know if he still holds the record) from West Point and getting his Masters in Industrial Engineering at Ohio State, he somehow ended up doing work for the office of the President (Ferdinand Marcos at the time). He never brought his work home so I'm unfamiliar with what he did exactly, but from what I was told he helped purchase a number of US military aircraft for the Philippine government when he was there, aside from other Logistics work. It was there he met my mom. They both moved on to work in several businesses, successfully.

You can see how my Western values were shaped. Dad's influence was heavy in that regard. I grew up speaking way more English than Tagalog, watching a lot of Sesame Street and the Electric Company. My dad would frequently go to the US for business trips, and he would always ask me to list down what toys I wanted him to get from all the catalogs he would bring back. America in my eyes was the land of milk and honey, and it is still very much that way to a great many Filipinos. They were the last foreign power to have reigned here, and regardless of what many Pinoys naysay about the US, they'd jump right on over given the chance.

Though it was dad who formed my value system, it was mom who heavily influenced my love of movies. I didn't get to see them in theaters at first, but video rental shops, which were ubiquitous in the 80s, were a evening staple. Most of what I would see is what she wanted to see, and they were an eclectic selection to say the least. Everything from Jackie Chan to Steven Spielberg I first encountered through mom's taste.

My movie-going experiences were first brought to me by our house help. Whenever the folks were at work, Myrna (my dearest 'yaya') used to take me along with another neighbor's help to the movies if time allowed, most of them to Filipino films. And yes they were wonderful. We would usually go and see the action films of Lito Lapid (most memorably his 'Leon Guerrero' movies), and the comedies of Dolphy. The first Hollywood film I saw on the big screen was 'Herbie Goes Bananas,' and through a child's eyes, seeing this lovable beetle scurrying through his adventures, it was magical.

The first movie that really struck me was 'Return of the Jedi.' It resonated so loudly that the whole evening surrounding the movie is etched in my memory. The theater building itself now seems to glow in majesty when I think of it. The staircase leading up to the show with its burgundy carpeting, its vast darkness. And the awesome sight of seeing tiny x-wing fighters zipping through space, looking hopelessly overmatched by monstrous sized imperial battlecruisers. Yet, the underdog triumphs and all is well. The force is with us always. This is probably why 'Jedi' is my favorite of the trilogy. Even though I recognize that "Star Wars" is a cinematic watershed and what a story-telling masterpiece "The Empire Strikes Back" is, 'Jedi' is tied to my heart.

The only other film that struck me harder in childhood was "E.T. The Extra Terrestrial." I didn't even see it in the theater, but on Betamax with my mom and her sisters. By the end, everybody was crying. Me? I was inconsolable. Even after the credits, I kept on crying out to ma, "Why? Why? Why did E.T. have to go away!?" Needless to say it stayed with me a long time. I've saw the 20th Anniversary Edition of 'E.T.' in the theater. I still cried at it. I must add that people who say it is overrated are just nuts. 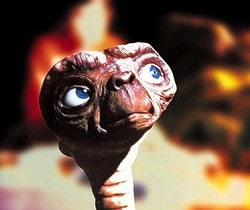 At the turn of the century, I got into the I.T. sector, duped into believing that this was the wave of the future and that we'd all be making big bucks from it (it's what you know, not what you're in that defines your success). I am now a SAP Technical Consultant, helping implement solutions for clients (companies) that need it. I only came to the realization around 2003, that I really am happier analyzing film than at anything else. It consumes me. I put up one of the first Filipino websites dedicated to reviewing films in http://www.flipcritic.com (now down and owned by a domain squatter), but my work caught up with me, and was I unable to maintain my writing.

I wrote in my spare time as a film critic for the Manila Times under the guidance of my editor Dennis Ladaw (whom I am very grateful for), contributing several reviews over a short period of time. Seeing those reviews published was a high point in my personal life, as a kind of vindication that I know very well what I'm talking about. I found that they couldn't publish as many as I could give, due to financial constraints. I pretty much wrote those for free, since I didn't need the additional income, which was meager. Film journalism/criticism is not something you can live on comfortably in South East Asia. One of my good friends, a former film critic for a competing newspaper, said that his day job was providing descriptions for porn sites. Yes, apparently they outsource that kind of work as well.

Not to criticize the I.T. profession, which puts food on the table for my dearest wife and daughter, but in my line of work, most of the solutions I implement become redundant after a while. It's merely the tools that change. I find films to be endlessly creative, the very good ones anyway. And creativity (among other things) is really what makes a film stand out doesn't it? As Anton Ego says, we are in entitled to provide "the defense of the new." If only I could provide it more often.

Hopefully with this venue, I will.

P.S. Where does the word 'flipcritic' come from? Well 'flip' is sometimes American slang for Filipino. And I felt writing in a pseudonym was cool at first. I needed a unique word. It is indeed.

He Tweets at flipcritic.