Man as a lesser species 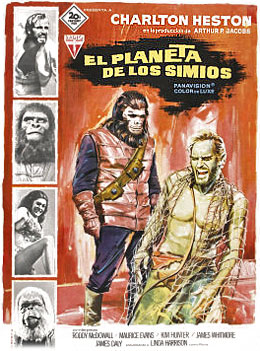 One of my earliest and most memorable movie going experiences was Franklin J. Schaffner's 1968's "Planet of the Apes". It was presented in my grade school's Cine Club (sort of a small film festival that played one different, semi-recent movie every Saturday during a period of about a month). For weeks prior to the showing I was mesmerized by the publicity artwork which depicted a caged Charlton Heston being repressed by a gorilla. As an eight year old the movie originally struck me purely as a horror piece but it is the other "little things" that still compel me to write about it after all these years.

What's more, I believe "Planet of the Apes" with all of its different incarnations: original classic, sequels, remakes and TV adaptations, makes for a wonderful example of cinematic "dos and don'ts" At a glance the first entry in the series may seem like just another monster movie but this is hardly the case. It's too bad neither the majority of the filmmakers involved in the sequels, nor Tim Burton in his remake, were ever able to figure this out.

As fascinating as this upside-down world itself is, "Planet of the Apes" first and foremost is a film about intriguing ideas, a feature that allows us to view Man in a situation where he's become the lesser species and to feel what it must be like to suddenly be discriminated as such. One that sets a rather believable example of time travel that lets us understand the consequences of moving to a future time in which all we care about in this world has long since vanished. By fast-forwarding us there, we are able to witness the consequences of mankind's irrational actions. It is also a movie about a man disenchanted with the human race who is put in a situation where he has to defend it from these outsiders, whose idea of safe-guarding their faith is censuring anything new that contradicts it, only to later conclude none of the parties here deserved to be defended in the first place. 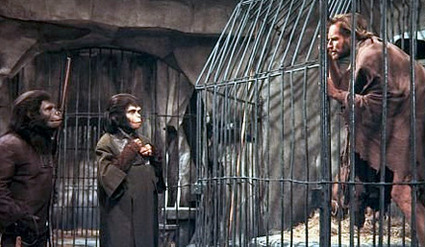 What's fascinating about the Ape society depicted here is that all of its members aren't precisely created equal: Gorillas are brutes and warriors; Orangutans are the intellectual keepers of the faith; Chimpanzees the gentler, scientific types (the most humane of them all you could say) and as such, they are the bottom step in a civilization being ruled by force and politics. 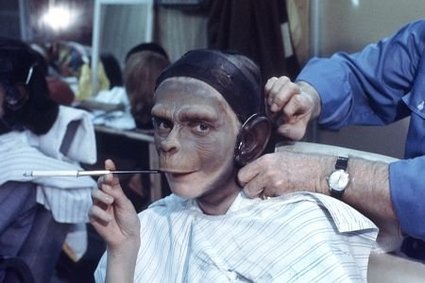 One the film's main assets are the life-size, livable sets, my favorite being the Natural Museum populated with stuffed humans which only appears on screen for a few seconds, yet it provides the picture with one of it its biggest shocks which tells us it was built on the script's requirements and not the other way around. With today's computer technology, I think it's safe to say no present day studio would have invested in sets like this. There was also that that revolutionary make-up which went as far as giving each character a different, specific look and even allowing them to show emotion. Not that anyone ever claimed these apes looked 100% accurate; after all, such creatures' lower limbs are much shorter than those of humans, but compare them with Dino DeLaurentiis' "King Kong" remake, in which at no time were we convinced we were witnessing anything but a guy in a gorilla suit, and you realize that somehow the creatures in "Planet" succeeded in making the illusion complete. This situation also brings to mind Billy Wilder's "Some Like It Hot," a movie in which these men that dressed as women looked anything but such, but this wasn't relevant at all. It's hard to grasp why in some cases the illusion works and in some cases it doesn't, maybe it simply has to do with how much the story is able to absorb its audience in the first place.

If there is one thing that becomes perfectly clear while watching the original entry it's how much Shaffner valued feeding into the audiences anticipation for what's about to happen, by taking his time and slowly dropping one hint after another (along with the creepy Jerry Goldsmith soundtrack, perfectly setting the mood). This is not to say that we are not conscious who it is exactly that inhabits this planet (after all, we are well aware of the film's title) but Schaffner patiently waits for the right moment and circumstances to reveal each of the surprises and thrills that the script has to offer, be it the initial sight of the title characters, right when the heroes are found undressed and at their most vulnerable (not unlike the shower scene in "Psycho"), or also the coming moment in which we learn these are indeed talking apes (why spill all the beans at once?) and it isn't until much later, after we have witnessed the Heston character going through the humiliation of being treated like an animal, that Schaffner picks the perfect phrase and moment to turn the tables on the apes by shocking them with a talking human. "Planet of the Apes" is a film in which phasing is everything. This approach brings to mind the similar steps Steven Spielberg's followed with "Jaws" on which he didn't reveal his shark until the second half of the movie; it's fairly obvious that it wasn't Spielberg who invented this concept but rather, has a firm grasp of it. 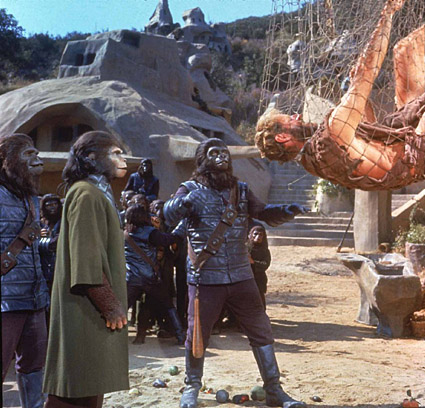 I think it was from James Cameron that I heard years ago the best definition of what the function of dialogue in film should be, and it goes something like this: every line in a script should answer something a previous one set up before it and simultaneously, set up the next one to follow. Few films are better examples of this technique than "Planet of the Apes".

Here again I find that the best way to explain why the 1968 original works so well is by comparing it to subsequent sequels, TV versions and remakes that didn't. This is not to say that I didn't anxiously await the release of each and every one of them as they came out; a few were good, a few not so much, a couple downright awful. What I found concerning about the latest remake, is that Burton never really understood what made the first entry great; it would seem his sole "re-imagining" goal was to give the audience more action and bigger and better apes, which was never a problem the first time around. He went ahead and released all these hairy creatures 10-15 minutes into his film as if, well, emptying a barrel of monkeys all at once, showing little faith in his audience's patience; his idea of building suspense being similar to putting a child at the end of the conveyor belt of a chocolate factory. Additionally (and this was also a problem in the short-lived 70s TV series) if all humans and apes can talk in the same film there is no clearly superior species, the visitors end up as nothing special and this crucial point is all but lost. 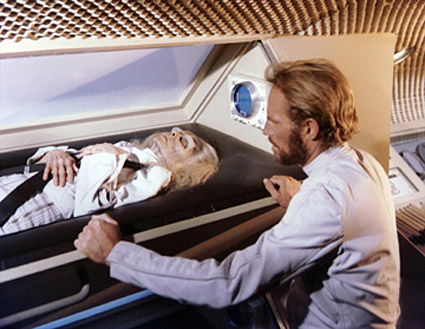 It's interesting how Schaffner's film reflects the way women were seen some forty years ago in society, by opting to get rid of the only female member on the space ship before encountering the apes. My guess is that the filmmakers assumed most of us in the audience would simply not have appreciated seeing a woman being mistreated by the apes as her male counterparts were. We of course now live in a much different world where (among other things) women actually fight in wars but I don't think this would have felt right for 60s audiences, at any rate, allowing this would have made for an altogether different film and I don't believe it would have been a better one.

"Planet of the Apes" is not a perfect movie. The humor in it seems a bit too self-conscious (human see, human do), the mood of the times on which it was made, all-too evident ("you just can't trust adults"). It also makes its point against a society that tries to close its eyes to scientific certainty but keeps on pressing the matter over and over again. At any rate, whatever faults it may have, I still believe we are talking about an outstanding movie that came out during a particularly outstanding decade in film. Perhaps the final factor that managed to help it transcend from merely a good picture to a great one was its sensational Statue of Liberty ending, one which we never really see coming, not that there weren't plenty of clues -- after all, here is a planet with the same gravity as that of earth, with water, vegetation and life quiet similar to ours (never mind the fact the English was the official language, spoken as well as written). I realize there are many people out there who appreciated the remake's ending but I've yet to meet anybody who can say they were shocked or even slightly surprised by it. Let's face it, it was no more and no less than a variation of the first.

However readers may feel about the original "Planet of the Apes", at least I believe we can mostly agree this is a film that aspired to being more than just another monster flick, one that has very definite ideas and the best way to transmit them, one that makes it clear that evolution, in this case that of more recent filmmaking, seems to be moving on the wrong direction, so to speak.