Life beyond Rationality and Compassion 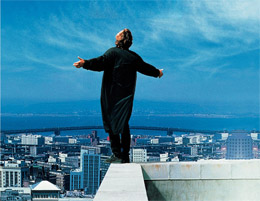 Have you ever been hit so hard that you've been left in a permanent daze? I'm speaking of a defining event that, in a matter of moments, changes everything for you, permanently. Maybe it's a collision. Maybe a life event like a tragedy or a divorce. You're at the epicenter of the calamity. The destruction hits you right between the eyes. And while you make sense of what hit you, if you ever do, your loved ones bear the brunt of the hurricane that you become. Like a set of ripples, it realigns everything you do. Peter Weir's "Fearless" 1993 shows us the effect of a plane crash, and tells us that when we get hit with such cataclysms, no single way resolves the trauma.

Fresh, green corn stalks. Smoke. The soundtrack of the world is muffled, but getting louder and sharper. Then, silent, suited, dusty Max Klein (Jeff Bridges) appears, slowly walking along, holding a baby. He wanders. When he finally finds open space, he also finds the tail of the plane he was just riding. Having just escaped a plane crash, would you be running, or maybe stumbling? He was walking, slowly. Then, he launches into a series of confusing choices. He checks into a hotel. He studies his body curiously, like a Replicant from "Blade Runner" (1982) examining his newly constructed parts: the crash split the plane into pieces, yet he is almost completely untouched. Thus, he has figured it out: he survived a plane crash, so he is now obviously invincible. And, here is where our problem begins. 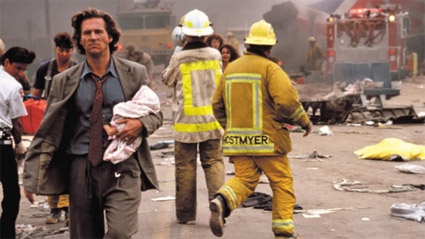 If Zemeckis' "Cast Away" (2000) is about a man coping with his powerlessness as the world slips away from him, Weir's "Fearless" is about a man asserting his invincibility while his tattered family frantically holds the net to catch him when he falls. Part of the challenge of "Fearless" is that the central character is such a tough nut to crack. We know there is a logic in his thinking, but it makes no sense. But, that is exactly the contradiction of his name: Max (maximum) Klein (short).

He proves his invincibility through small acts of rebellion. Once deathly allergic to strawberries, he holds his breath and chows down. He closes his eyes. Smiles. Pauses. I wonder if he's enjoying the taste of strawberries, or the thrill of transgression. Some people rebel to experience the joys restricted from them. Some rebel to enjoy the rebellion. At one level, rebellion is a shameless breaking of rules. At his level, rebellion is toying with the ultimate censor: death. He drives a long highway. He sticks his head out the window. He closes his eyes. Smiles. Pauses. Again, is he enjoying the fresh air, or the pleasure of danger? He slaps people. He shouts. But, he also has moments of vulnerability, which he combats with even more perilous behavior. He walks through a busy street, letting cars screech and steer around him.

There are those moments in our lives that hit us so hard that they require us to choose. Either we draw strength from them and use them as fuel to race forward. Or, we fail: we spend the rest of our lives hiding quietly in the tall shadows of those moments. And, this contrast brings us to the other end of town, across the Bay. In our tale of two cities, we movie now from San Francisco to Oakland.

Carla Rodrigo (Rosie Perez) has also survived the crash, but has lost her baby in it. And, now she sleeps her days away in a dark bedroom, waiting to die. If Max was resurrected from the crash as a savior, Carla has risen from the dead as a fragile zombie. He is a man of rational thought. She is a woman of love. He is a chuckling Atheist, who "died in his head." His Atheism began in childhood when his father died. She is a despondent Catholic, who has died in her heart. Now her Catholicism starts escaping her through bouts of guilt. Strangely, it's Max that walks in an empty trance, while Carla remains full of life. They develop an expected connection, but the motivation is unexpected: Max's overbearing rationality cannot contain Carla's humble, deep humanity. Perhaps he sees himself as the hero for her damsel in distress. Perhaps he wants to guide her to her own invincibility. Perhaps he is attracted by her delicateness. He had already begun disconnecting himself from his son, overtaken by a boy he saved in the crash. Now, he develops an infatuation for her, disconnecting him from his own wife, Laura (Isabella Rossellini). 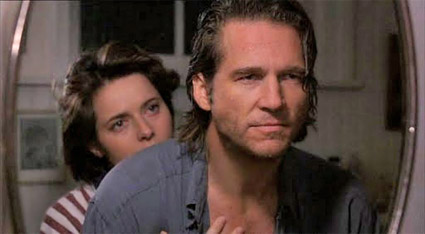 And this narrative unfolds through repeated interruptions. Scenes in "Fearless" rarely complete; they get interrupted. Just as this new relationship and challenge begins between Max and Carla, we begin feeling a sense both of hope - in Carla - and trepidation, in Laura. And, just at that moment that we widen our eyes, hoping to find out what happens next, Weir diverts us with a scene that hit me like a runaway train. The crash survivors and a few family members of the deceased meet in a very dark, quiet room, to tell their stories. At first, I felt like I was looking at actors conducting a staged reading. Yet, I felt like they were telling real stories. And, as they continued to speak, letting their conversations take devastating twists, again by interruptions, I was frozen. Part of the brilliance of the scene is that it sets up the devastation of the moment that takes place immediately after the meeting, when Carla meets with her husband, Manny (Benicio Del Toro). Again, the whole narrative unfolds by way of interruptions, perhaps because that is itself the nature of calamity: it hits us as an interruption. 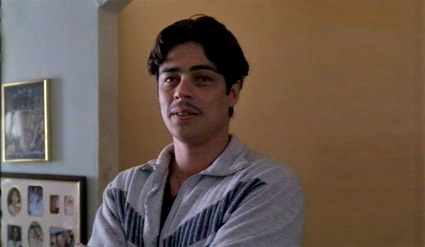 The intimates and advisers around the survivors offer their own specific ways for grief. Laura seeks to bring Max slowly back to earth, though she cannot reach through to him. Manny is the self-justifying opportunist, refusing to enter into Carla's world, while trying to fulfill his ambitions. Further, Tom Hulce is a falsely-attentive lawyer in big glasses and bright suits, translating grief into dollars. Meanwhile, John Turturro is a quiet psychiatrist who tries to compel coping by conversation. And everyone around Max fails him repeatedly. 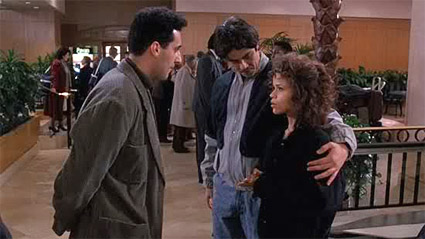 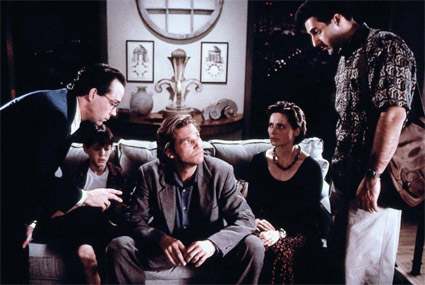 Everyone struggles to not only rein in Max, but to also keep him from unraveling other efforts. Sometimes Max hides behind a skewed code of ethics. Sometimes he arrogantly "debunks" his interlocutors as frauds. But, as soon as someone pushes through his facade of bravado (sometimes by merely entering his personal space), he runs away to another adrenaline-seeking daredevil feat. And that's the point: he's supposedly invincible, yet he keeps running away, afraid to face the scars beneath his flawless surface. 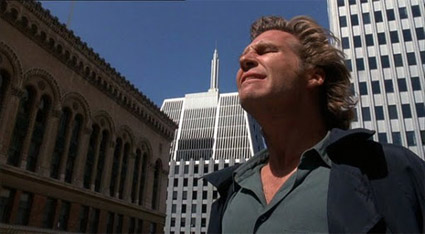 The voice that keeps pushing him is not his own, so much as it is the voice of the man - Max himself in slow-motion flashback - in the plane at the moment he makes peace with his death. That was Max like he had never been. That was the one moment in his life before or since that Max was truly invincible, by being truly fearless, truly at peace, without any need, providing peace to others. That is the moment of ecstasy he now tries to reignite. Because he is unable to do so, except through his hormone-triggered rush, he steadily descends to his own inevitable crash. And, at first we were convinced that Laura would be waiting to catch him, but as the story unfolds we lose confidence as steadily as she does.So as Max continues to spend time guiding Carla, we wonder if he will succeed in actively destroying her or will she passively save him. He uses his sort of rationalized compassion to treat her, even though it is a contradiction. Every time he lifts her up with some spontaneous scheme, like walking through the Christmas shopping mall buying gifts for their dead, she quietly walks up to another baby, smells him, and soon her guilt overtakes her. Then, he is unable to help, except by shouting, running away, and hatching another daredevil scheme. 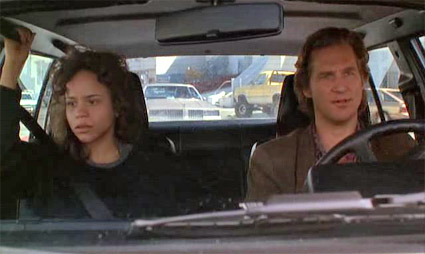 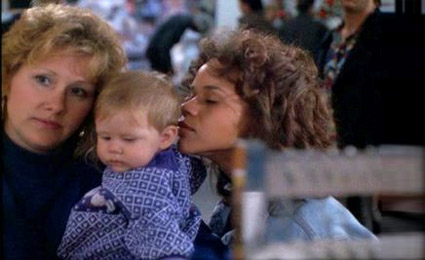 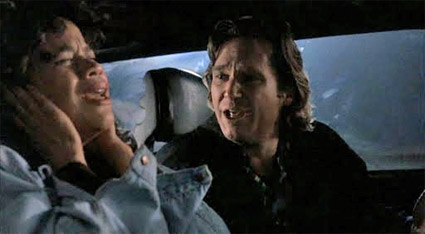 And, the final passages of the film take their expected, necessary, frightening and hopeful courses. Both Carla and Max do find healing, essentially the same way, but through their own pathways. Carla finds healing through allowing rationality to inform and correct her guilt. Max finds healing by embracing the limits of his rationality, hoping for a taste of true compassion from the wife he pushed to the edge of her support.

And, thus it seems that when we are hit with those cataclysms, and we try to make sense of what has hit us, and as we try to make sense of the new world we face, the challenge of grief - according to "Fearless" - in one sense is sometimes to comprehend what has happened. Success in grief, however, often involves letting the right people in. And letting them help us heal. But, we have to open the right doors for them to walk through, no matter how hard we try to hold them shut.