It's sometimes wise to call the cops 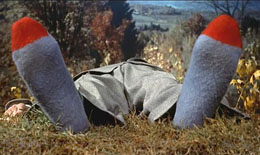 While he has been called "the Master of Suspense," Alfred Hitchcock has also been called "the Master of the Macabre," and that title is exemplified by his delightful black comedy "The Trouble with Harry" (1955). On the surface, it looks quite atypical compared to Hitchcock's more famous works, but this is a vintage story from a great director with a wry sense of humor, and it is also one of the most liveliest works in his exceptional career. Although somebody is dead, there is no suspense or danger or blond lady in the movie, and all we have to do is leisurely enjoy a pleasant walk with its funny characters as they try to deal with bizarre trouble on one fine autumn day in their ordinary peaceful rural town in Vermont.

Right after the main title accompanied with the jaunty prelude by Bernard Herrmann on the soundtrack, we are introduced to the gorgeous scenery of the New England countryside under the autumn sky. Herrmann's music goes into a pastoral mode with this beautiful sight decorated with yellow, red, brown, and green, and I think about how lucky we are to appreciate this beauty of nature thanks to a happy coincidence between two unconnected evolutionary processes: one being the deciduous plants developing such colorful ways of disposing of their leaves before winter, and the other being our ancestor species evolving with an optic neuron system capable of sensing colors. 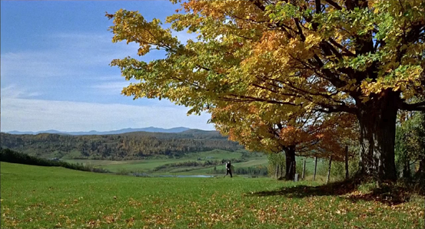 On such a lovely day like this, something unfortunate happens. Three gun shots are heard in the forest, and then a little boy finds a dead man laid on the ground. Not long after he goes away, Captain Wiles (Edmund Gwenn) comes across the body while he is going around to check whether anything was shot by him. Because he believes he has killed that man by accident, he decides to hide the body before anyone sees it, but this becomes difficult because it seems at least half of the residents in the town are drawn to the place. The town doctor comes by the spot more than once while having no idea what is on the ground, he is so occupied with reading a book that he does not even notice the body even when he stumbles over it. My mom once said that I would keep reading books even when North Korea suddenly invaded, and I am sure she will be amused by his silly behavior. 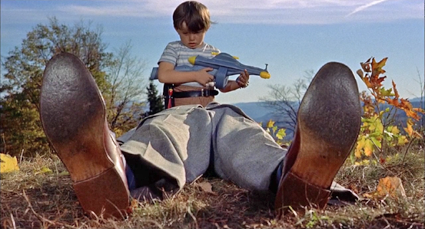 A funny thing is, the other characters do not react like ordinary people do when they see the dead body, either. It turns out the dead guy's name is Harry Worp and it is later revealed that he came to the town to visit Mrs. Jennifer Rogers (Shirley MacLaine), the young mother of the boy who first finds Harry's body. Harry is the husband she left years ago, but she is not so much concerned about his death, and neither are her neighbours. Harry's death is just a mere annoyance in their daily life, so we get a series of bizarre moments, such as when two characters having a courteous conversation over the body. They are a bit worried about the incident, but they are so detached to the inconvenient fact on the ground that it looks like they are in a British parlor comedy (not so surprisingly, the background of Jack Trevor Story's novel the movie is based on was originally British countryside). 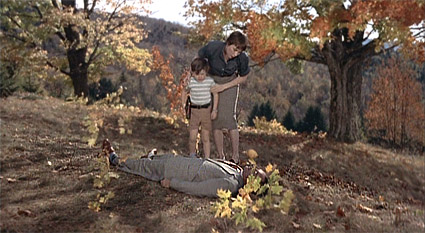 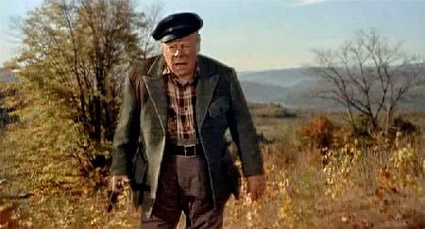 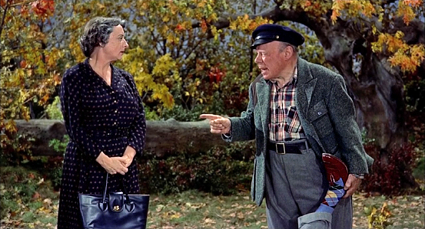 But, still, Harry's body remains something which should be taken care of by the living involved, mainly due to the watchful eyes of Deputy Sheriff Calvin Wiggs (Royal Dano), who intuits that something suspicious is going on after hearing gun shots. Sam Marlowe (John Forsythe), an unknown local painter whose abstract paintings may deserve a small space in the Contemporary Arts section in the Art Institute of Chicago for profound simplicity or simple profoundness, decides to help the Captain mainly because it can help his relationship with Jennifer, and so does Miss Gravely (Mildred Natwick), who has a very good reason to help the Captain besides her personal feeling toward him. 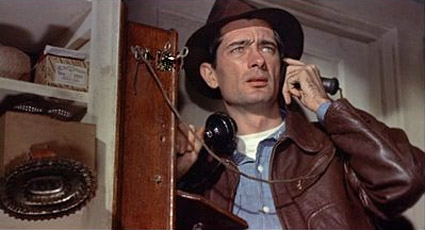 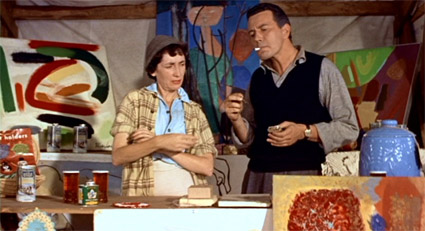 Poor Harry. Thanks to the constant shifts in their hearts because of sudden understandable attacks of conscience and hurried judgements, his body goes through lots of ordeals while the mystery of his death hovers over them like a ghost. It is buried and exhumed more than once, so there is lots of shoveling throughout the film, and it is even put into a bathtub at one moment. But I guess Harry will not mind about that, because, as a man says in Errol Morris' great documentary "Gates of Heaven" (1978), death is for the living and not for the dead so much.

This messy comic disturbance is observed with that detached attitude and dry humor we have seen from Hitchcock's other works. A grim matter like death doesn't disrupt the quiet atmosphere of the town at all, and everything in the story advances like a weird funeral march in slow clockwork tempo. In fact, when Harry's body appears for the first time, it looks like a body well-manicured right before a formal funeral - except that it does not have its coffin.

While it is weirdly funny, "The Trouble with Harry" is also a quirky romance movie which gets more endearing through repeated viewings. What the main characters do for getting out of their trouble is unethical and illegal, but they are likable people who just do not regard death as seriously as we do. John Forsythe is your average guy next door with some interesting philosophical thoughts on fate and death, and Shirley MacLaine, who made her debut with this film, exudes the plucky personality with wonderful comic talent we have enjoyed since this film. Now 57 years have passed and she is quite old, but MacLaine has lost none of her talent as shown in Richard Linklater's black comedy "Bernie" (2011), which is incidentally also involves with a dead body. 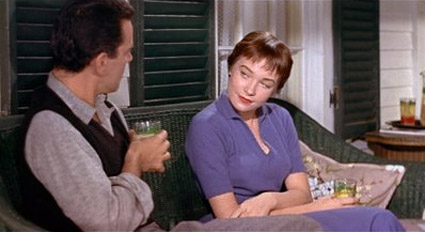 On the opposite of Forsythe and MacLaine, Edmund Gwenn and Mildred Natwick are very good counterparts and they are in fact a better autumn romantic couple. With an actor with genial looks like Gwenn, you cannot possibly imagine anything mean or heartless from him (after all, he won an Oscar for playing Santa Claus in "Miracle on 34th Street" (1947), didn't he?), and you instantly feel that the Captain has no hard feelings toward Harry, although he buries his body several times. Natwick is also fun as a spinster who turns to be abler than her lover in their cover-up job, and she has a good understated chemistry with Gwenn while their characters tentatively approach each other like a mannered middle-aged British couple reluctant to cross the threshold between them. The moment around the ending when they open their hearts to each other more than before has a small poignancy in contrast to their crazy comic situation. 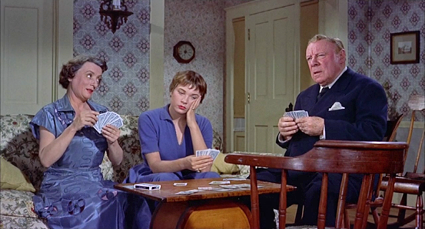 If there is the fifth main character in the film, it goes without saying that it is the autumn foliage gorgeously captured through Technicolor by the cinematographer Robert Burks, who was one of Hitchcock's main collaborators and won an Oscar for Hitchcock's other film in the same year, "To Catch a Thief" (1955). The movie is one of the most beautiful autumn movies I have ever seen, and the recent viewing on high definition confirmed how meticulously Hitchcock and his crew set its colorful atmosphere on the screen. When they could not shoot at the locations in Vermont due to weather problems, they came back to California with loads of autumn leaves, and those leaves were attached to the trees at the studio, one by one. Though you can easily distinguish the studio shots from the location shots, the result looks almost flawless on the whole, and they really did a terrific job, especially considering that at least 50% of the shots were made at the studio. 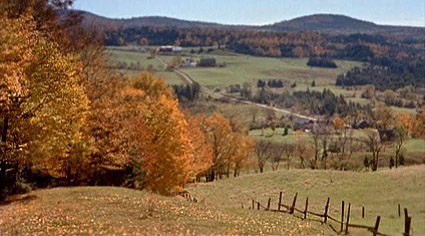 And the movie was the beginning of the fruitful collaboration of Alfred Hitchcock and Bernard Herrmann, who had been well aware of each other since they began to work in Hollywood but had never gotten a chance to work with each other before this film. In contrast to many of his brooding classic scores like "Psycho" (1960), Herrmann composed a blithe score for the comic situations in the movie while never overlooking the macabre side of the story, and there is also a touch of folksy lyricism in his score whenever the movie looks at its picturesque background, such as when the characters are walking back to their town after finishing their latest work with shovels. 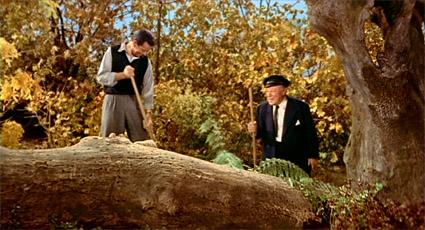 In the end, nobody gets hurt, and everyone is happy to be out of the trouble with Harry, and even Harry's body gets what it deserves in the ironic finale. Compared to masterpieces like "Rear Window" (1954) or "Vertigo" (1958), "The Trouble with Harry" looks pretty trivial as a minor work made during the most productive era of Hitchcock, but it is a very interesting work illuminating the foundation of his classic thriller films. 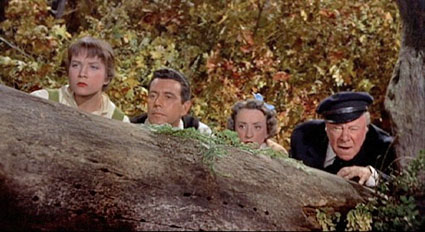 No matter how much the things get morbid, pervert, and nightmarish, Hitchcock's movies do not lose wit and humor, and "The Trouble with Harry" shows us a great director merely having carefree fun with playing his droll funeral music on one fine autumn day. Whenever the tree leaves become tinted with colors as the weather gets chilly, I feel an urge to revisit this colorful comedy, and, while having a pleasant time with it, I am reminded again and again that it is wise to go to the police immediately when you find a body. Not many Hitchcock movies can do that, you know.