Lately, not all of the exclusives are so exclusive as Comic-Con International attempts to be more consumer friendly. Some of the items you can pre-order and you don't even have to make it to Comic-Con at all.

My favorite four-lettered word is free and while my husband and I are TOS Star Trek fans, we also like Star Wars. Of course, Comic-Con has plenty of merchandise for fans of either series.

After snafus with line management (which according to some posts on the Comic-Con International Facebook page were many), I dashed into the preview night crowd searching for that one item that would make this fan happy. My superpower is the ability to slip through crowds as I dodge elbows.

When I initially got to the booth I had been seeking, I was disappointed. They had given them all out, but I stuck around talking to the people in charge and a stash of merchandise was found. Although I have two dogs, I was only able to get one pair of Yoda ears.

Yes, Star Wars has gone to the dogs. That shouldn't surprise people at Comic-Con for two reasons. Petco, the company that is selling the Star Wars pet collection, is a prominent San Diego company and has its name on the nearby park, Petco Park. 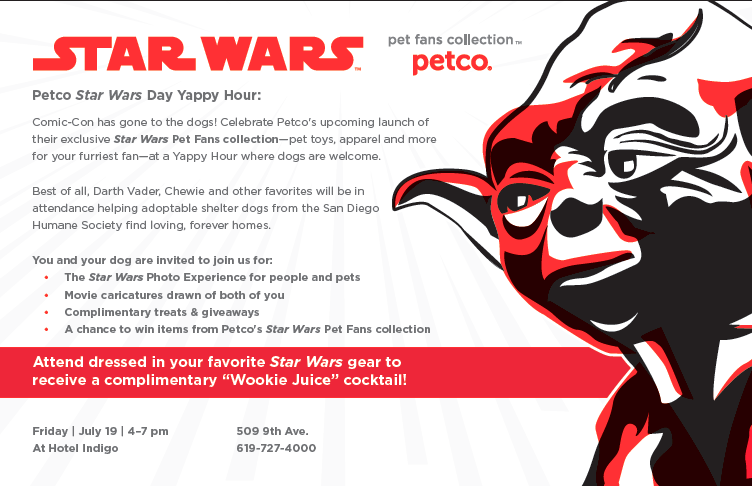 Some Star Wars fans have always had the suspicion that Star Wars is a little canine-influenced. Don't the Ewoks remind you of Affenpinschers or the Brussels Griffon? Chewbacca is little more than a giant version of the common horror flick werewolf. Those Storm trooper outfits look like Cubist impressions of a Pekingese. Moreover, Yoda has a strong resemblance to a Fennec.

So teaming up Petco and Star Wars seems like a natural. Dog lovers and Star Wars fan are invited to a Yappy Hour on Friday at the Hotel Indigo in downtown San Diego from 4 p.m. to 7 p.m. Finally, Comic-Con has incorporated everyone—adults, male and female; families with kids in tow and people and their fur friends.

The party is open to the public and you can bring your dog (sorry no cats). Darth Vader and Chewbacca are scheduled to make appearances (helping to adopt out dogs from the San Diego Humane Society) and you can have movie caricatures drawn of both of you and there will be plenty of treats, giveaways and chances to win products from the new Petco Star Wars Pet Fans collection. The collection doesn't launch until this fall. We'll have to wait until then to order our second pair of Yoda ears.

The Petco Star Wars Yappy Hour may be a canine-centric zoo, but we're going. I'm even bringing my new purple light saber. Hotel Indigo is located at 509 9th Ave., San Diego. (619) 727-4000. If you dress in your favorite Star Wars gear you get a free "Wookie Juice" cocktail.

After acquiring my set of Yoda ears, I was able to relax and enjoy the sights and cut through and past the lines in the exhibition hall to photograph the various displays before returning to the all-night line for "PSYCH: The Musical." More on that later.