Wednesday evening (18 February 2015) at the Landmark Theatre in West Los Angeles, Richard Linklater described working with film editor Sandra Adair as one of the “most satisfying relationships because it has none of the angst and terror of most personal relationships.” Linklater and Adair were the special guests for the third conversation in the Film Independent Directors Close-up series: “In the Cutting Room with Richard Linklater and Sandra Adair.”

Adair and Linklater have a comfortable relationship without much drama. Adair had been living in Hollywood but moved to Austin, TX in December 1991 because she wanted to raise her kids there. The Houston-born Linklater was already in Austin and had begun working on his “Dazed and Confused.”

Moderator Catherine Hardwicke (“Twilight”), a graduate of the University of Texas at Austin, worked with Linklater and Adair on the 1996 “SubUrbia” doing production design. Despite her early goal, when she told the audience, “I’ll try to stir some shit up,” Hardwicke was only able to whip up a pleasant exchange, as relaxed as if we were sitting on a porch just trading friendly comments with neighbors.

Of how he met Adair, Linklater said that for “Dazed and Confused,”  he understood that “I needed like a real editor and,” looking at Adair, continued, “you were suddenly the only editor in town. You have a real resume. You had been in Hollywood.” Joking aside, he also explained that “you don’t know anything until you start working with somebody.”

Adair confessed that “I never read the scripts. I really don’t discuss the scripts with Rick. The film isn’t really the script. I wait until it was shot and go with what I have.”

The 1993 “Dazed and Confused” was a coming-of-age comedy about the last day of class for a group of high school students, the new senior class haze the incoming freshmen and the students cruise, converse and party. In a montage clip shown at the Landmark, different groups are characterized by their conversations and there’s a delightful early look at Matthew McConaughey whom Linklater found to be “a natural character actor.”

While Linklater may seem laid-back because he collaborates with his actors, even making Ethan Hawke and Julie  Delpy co-writers in the sequels to the 1995 “Before Sunrise,” he believes in rehearsals before shooting any film. That saves time and money. He advises to “bring the department heads before you start shooting so you can get feedback and have that discussion” about camera angles and other issues. “It’s better than on the day of, on the clock.” For the same reason, he likes to have rehearsals on location so you can go over “how you’re going to cover it, how you’re going to block.” He joked, “I like to be able to sleep at night before shooting. Inside, I’m growing a tumor I’m sure, but I’m pretty calm. You can’t really fake confidence.”

To get the whole cast comfortable, Linklater commented, “I always insist on three weeks of rehearsal. That’s fundamental. Some people want to be on the set and create there. I like a more relaxed set where you might be finding a few new things. Some scenes are transformed quite a bit even if the reading went really well. Directors have to be conscious of an audience’s logic.”

Sometimes the script reads well for the studio (compared to “Slacker”), but you still have to figure out “what’s the shot,” citing Mike White’s “School of Rock.” According to Linklater, “Jack (Black) was already attached. We just thought let’s make a cool movie, a movie that we’re proud of and our friends would want to see.”

When Jack Black’s character, Dewey Finn, introduces himself to his new class, the scene “was covered from every imaginable angle on the kids” Adair explained. The reaction shots established “the personality of the kids and adds to the comedy and the relationships.”

Again, Linklater took three weeks of rehearsal “to get Jack and the kids very comfortable” in the room together and with each other.

As a writer, Linklater commented, “It’s hardest starting movies. You have to think what do people need to understand. With ‘School of Rock’ it starts when he gets in the classroom. You can then cut a lot of the exposition.” But he also added, “I have my endings before I have my dialogue.”

With actors, he related, “My goal is to make them feel comfortable. Whether it’s rehearsing or talking.” He finds the naturalism by observing how conversations flow and thinking about the different agendas people have and what one’s really saying. In the end, he “wants it to feel real.” 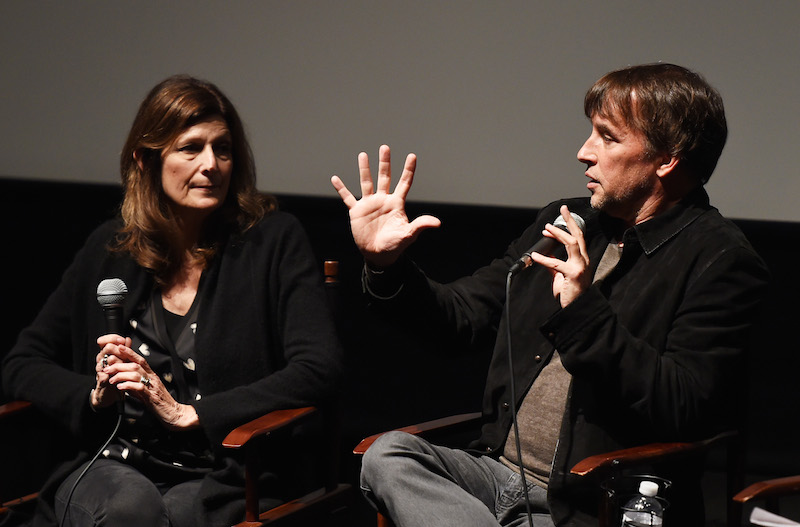 In their “accidental trilogy,” some of the scenes that seem so easy actually required a lot of scrambling in the editing room.

In the 1995 “Before Sunrise,” Jesse and Celine meet on a train. In the 2004 “Before Sunset,” they meet again nine years later while Jesse is on a book-signing tour in France. The scene where the two are in a taxi cab together, was filmed as Hawke and Delpy were actually going through traffic with two cameras in the car. Adair had to match takes for the lighting and backgrounds for continuity so that the transitions would seem natural.

Adair related, “Julie’s performance had a lot of takes. When you’d jump from take to take, there’d be cars in the background or no cars in the background. We needed to find a reaction shot with the right car movement.” Adair explained, sometimes the actors “would be really letting go and being real and honest and really bringing it with their performance and the car stops.”

Yet Adair felt, “What makes it work is the right reaction shot. That scene took me a week” to edit.

Linklater recalled that during the filming, they usually had one big scene per day and filmed during the late afternoon to catch the right light.

In the 2013 “Before Midnight,” the meal dinner scene was particularly challenging, infamously so. While we get a hint of the tensions the two characters face, because Adair wasn’t on location, the multiple angles were confusing.

Linklater was in Greece and recalled the scene took 2-3 days to shoot. “I remember sending you a very long e-mail. I wanted to feel like you’re at the dinner table.”

For Adair, “I spent hours creating this diagram to understand the shots. Then I thought, this is no help. It’s like an astrological reading.” She does, however, say, “I always expect one scene per movie that’s going to trip me up.”

Linklater jokingly advised skipping scenes with meals in a confined space, but it’s one of the most revealing scenes of the movie.  Watching the scene in the crowded Landmark auditorium, you’d hardly suspect how difficult it really was. 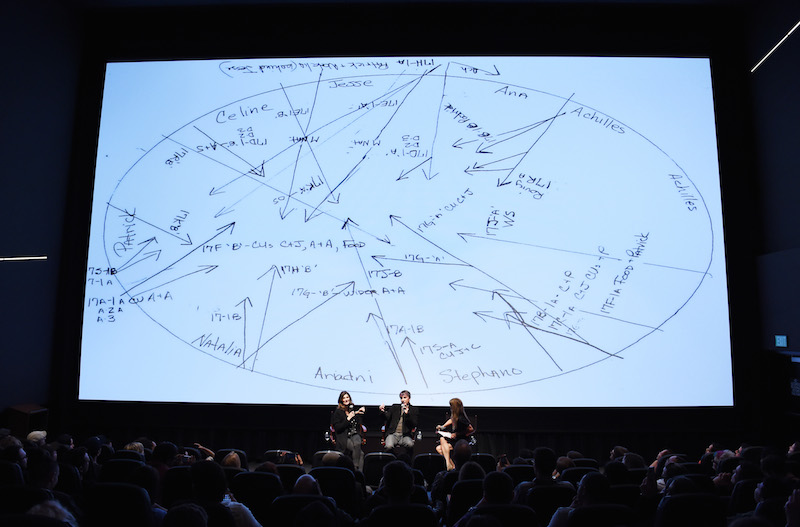 How ‘Boyhood’ Changed the Game

“Boyhood,” like “Dazed and Confused,” can also be classified as a coming-of-age movie, but it began filming in 2002 and continued filming once a year until finally wrapping in 2013. The film begins in 2002 with six-year-old Mason Evans, Jr. (Ellar Coltrane) dealing with his older sister Samantha (Lorelei Linklater) while under the care of their single mother, Olivia (Patricia Arquette). Olivia strives to improve her life through education and a series of relationships that only temporarily provide stability for the children. The kids’ bio father, Mason senior (Ethan Hawke), wanders through life aimlessly. As Olivia and Mason age, the two children grow and mature into more distinctive characters with the problems of their parents and temporary parental figures as uncontrollable background factors.

The two kids lived in the Austin area so keeping contact with them was easy, even easier as Lorelei is Linklater’s daughter. From 2005 until 2009, Patricia Arquette was starring in the TV series “Medium” and she’d fly in with only the weekend to get her parts shot. The three-day intensive shoots every year benefited greatly from forethought. “We worked out the dialogues until the last-minute. We weren’t improving. We were finalizing,” Linklater explained.

Austin boasts a vibrant live music scene, so it’s not surprising that music figures heavily in their movies. Linklater commented, “Every movie is different. Often we have all the music in advance. For some, we had fifty songs before we had any footage. In ‘Boyhood,’ everything was different…It was probably the most grueling.”

Originally, Linklater said they intended to have a score for “Boyhood.” “We got Graham (Reynolds) involved pretty early on. The film couldn’t handle a score,” Linklater noted. “That was kind of a surprise.” He wanted the transitions to feel “organic” and for the same reason, didn’t have cards up or text to signal the year or the passage of time.

Still music was an integral part of showing the passage of time. According to Adair, “We had hundreds of CDs of music.”

Linklater explained, “For every year. we wondered what are kids listening to.” Because of the eclectic tastes of the children involved, Ellar Coltrane and Lorelei Linklater (Richard’s daughter), Richard Linklater stated, “Our kids weren’t any help…We are kind of on our own. We had advisors. I wanted it (the music) to mean something to somebody. We wanted narratives.”

Linklater and Adair asked groups of kids about particular songs.

Adair explained, “We’d get comments like, ‘My sister really liked the song, but I hated it.’” Other times boys would confess that they heard the song all summer long, but only the girls liked it. They wanted songs that fit into someone’s narrative.

Other times, Linklater was able to use “annoying habits” his daughter Lorelei had picked up as we saw in the scene where her character Samantha addresses her mother with a salute. Yet Linklater said for a time, he was worried that Coltrane wasn’t growing up while Lorelei was. “I picked the one kid who never grows up.” But in time, Lorelei’s growth slowed down and Coltrane began to get taller.

Because of the “prose style” of the movie, there’s one transition they cut as being “too clever.” When they move into the empty apartment, “he runs down an empty hall to his room and then goes to the door,” Linklater originally thought to have an age transition then where he’d be a year older. But it brought too much attention to the transition so it was cut.

In “Boyhood,” Linklater wanted to show “It’s so incremental how we change and grow up. I wanted the audience to feel it by they own observations.” He didn’t want the audience to be “pulled out” of the movie with titles announcing the passage of time or clever transitions. He wanted “time to flow by.”

When the floor opened to questions, an audience member asked about the haircuts, but Linklater stated that there was only one case where an actor was told to have a specific hairstyle and that was with Coltrane’s character, Mason Junior. In the movie, he grows his hair long and has it forcibly cut off in what Linklater characterized as “a violent scene” that was like an assault. “In reality, he was so happy” to have his hair finally cut. 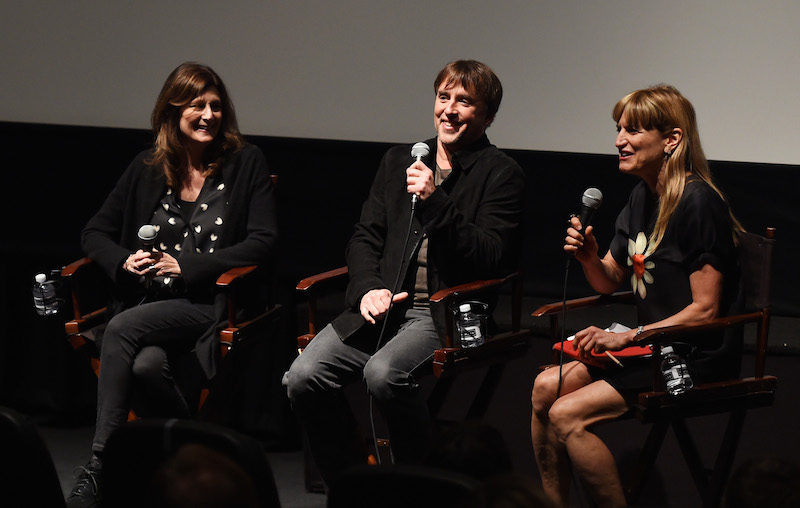 Changes in the Industry

Since they first began collaborating, things in the industry have changed. Linklater remembered when “At the beginning, dailies were being screened.”

Adair recalled that in order to compare different takes, often she’d have to take hours to splice each take together so they could be viewed together. Now with new computer software, each take can easily be inserted into a working copy and replaced.

Although they didn’t use green screen for the taxi sequence in the 2004 “Before Sunset,” they did use green screen for a scene in “Boyhood.” While Linklater didn’t think the scene looked as good as he wanted, he thought “It looks crappy now, but in the end technology will make it look better.” By 2013, it had.