The road to Selma was filled with obstacles for Dr. Martin Luther King Jr., and so was the road to the movie about that historic event. In the Tuesday evening (3 February 2015) Film Independent Directors Close-Up series opening talk, director Ava DuVernay was joined by her editor Spencer Averick and "Selma" star David Oyelowo on a panel that was moderated by Robin Swicord ("The Curious Case of Benjamin Button"). Perhaps the most surprising thing is that the only person who felt destined to be part of such a movie was Oyelowo: "I just knew I was going to play him before I leave this planet."

Swicord made certain that everyone knew how to pronounce Oyelowo (O-Yellow-O) and that she and DuVernay had met at a similar Film Independent series just three years ago and became friends. Friendships became an important theme throughout the evening. 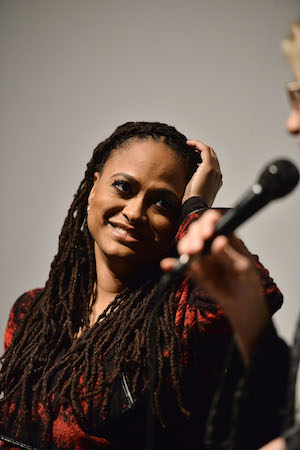 For DuVernay, Martin Luther King Jr. was "A man on my great-grandmother's wall, a picture right next to Jesus." For that reason, DuVernay just assumed he was someone important. Yet attending a Catholic school, there was not a lot about Dr. King in her education at school. Attending UCLA, DuVernay majored in African American studies but to an extent she felt King has been "homogenized into a four-word phrase": I have a dream. At that time, she was more attracted to the Black Panthers because "as a person of color, there's something romantic about the Black Panthers." She did come to realize that King was "phenomenal and strong and badass."

Prior to that, as a British citizen, Oyelowo grew up with only "a very peripheral knowledge of King." Yet the script ignited an obsession and he reported that directors came and went on this project. In 2010, Lee Daniels did hire Oyelewo, but twice the movie production fell apart including a time when "I was 10 pounds into my weight gain." That got a chuckle but little sympathy from the packed audience.

As the years passed, Oyelowo was cast in the 2013 Lee Daniels film "The Butler," as Louis Gaines, the eldest son of the titular character, Cecil Gaines, played by Forest Whitaker. Oyelowo's character participates in the 1963 Birmingham Children's Crusade and the 1965 Selma Voting Rights Movement. Oyelowo recalled, "That scene opposite Dr. King, I am so pissed." It was as if fate was mocking Oyelowo's dream.

Fate did have a role in Oyelowo meeting DuVernay. "I was on a plane to do a reshoot on a film called 'Rise of the Planet of the Apes,'" and he sat down next to a passenger who was watching the BBC One TV series "MI5," a program in which Oyelowo played junior case officer Danny Hunter from 2002 to 2004. "He turned to me and said: 'Is this you?'" The person then told him that a friend had asked him to put money into a film. That film was "Middle of Nowhere."

Oyelowo read the script and was won over. He had been inspired by Spike Lee's movies where the characters were rich and emotionally evolved, but most of the parts for black men were just stereotypes and caricatures. After going to dinner with "this random guy on a plane," and reading the script Oyelowo wanted to be in the movie. "Middle of Nowhere" was a 2012 independent movie written and directed by DuVernay that won the Directing Award for U.S. Dramatic Film at the 2012 Sundance Festival. Set in Compton, a section in Los Angeles, the movie is about a female medical student whose husband is serving an eight-year prison sentence when she meets a charming bus driver (Oyelowo).

DuVernay recounted that "I never thought he'd say yes to a small black film for no money," particularly since she had never seen him in any black films. DuVernay told the audience that "so often in this industry we wait for permission." Living in Los Angeles and with the help of social media, it is easier than ever to contact famous people.

Swicord interjected, that it is important to be "an advocate for yourself and the people around you who are talented." Oyelowo became an advocate for himself and later for DuVernay to direct "Selma."

DuVernay recounted how she helped educate Oyelowo into the scenario with some real "brothers" from Compton, an area in South Los Angeles that is 33 percent African American. While Oyelowo confessed that his accent does open some doors, it didn't that day when he took a bus from Sherman Oaks to Compton and met the four men .

DuVernay said that as a director she wants to be "a partner in the performance." She thinks of "what do they need, what can I provide them with that will help." Going on Oprah Winfrey's process of asking herself what can I do to help. For DuVernay, as a director she views her role as one "of service to this person as a friend" and yet she is "always selective with who I bring into this sphere."

Oyelowo commented that this was "exactly why I felt she had to be the one for 'Selma,'" because by being so open she allowed the actors to take risks, to jump off a cliff instead of giving a safe performance in a bubble of protection.

As a director DuVernay feels that editing is where she puts most of her focus and she has a longtime working relationship with Spencer Averick. They started editing together because he was "the first fellow artist I felt connected with." She trusts him and characterized their working style as "he lets me dream, then he cuts it." He also makes her laugh.

DuVernay added that "I applied to Sundance seven times" and got in on the eighth try. She had also played "the lab game" but never got accepted into a lab. "Sometimes you have to create your own systems, your own structures," she explained. Instead of soft pedaling, DuVernay encouraged the audience to be passionate, but not crazy. 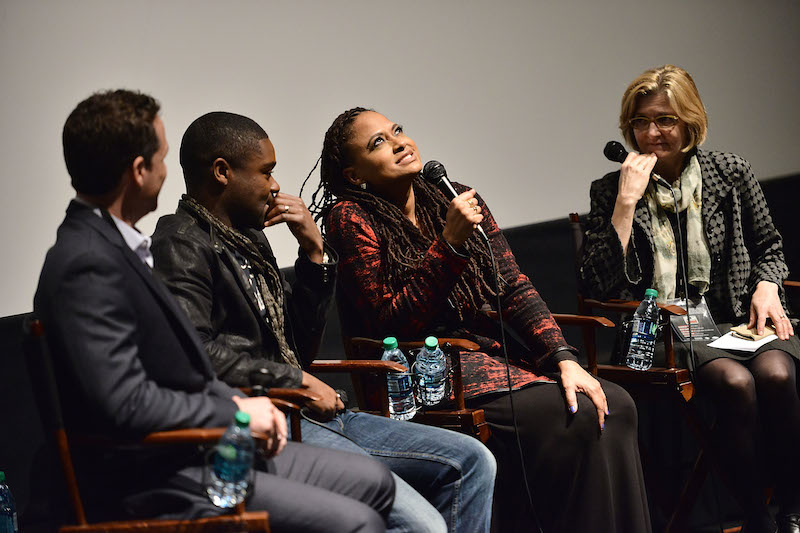 One of the things that DuVernay is crazy about is editing and pushing those boundaries. Averick said, they began cutting traditionally in the very beginning, but they also push each other. They look to find the end and the true beginning of the scene. "When you cut you're telling the audience to start thinking about something else." In many ways, the editor is the second writer. Still, DuVernay and Averick were editing up until the final studio deadline for "Selma."

DuVernay said that editing is really "like playing with dolls." Her actors are her Barbie dolls.

Oyelowo quipped that was the first time he'd been described as a Barbie. The audience laughed.

One of the clips shown was about King (Oyelowo) at home. He's looking for a white trash bag. DuVernay said, "The trash bag is the business of the scene." She wanted the audience to wonder why he doesn't know there the trash bags are in his own house; it's because he's never home. DuVernay didn't tell, she showed her audience something about the King marriage.

Now with the success of "Selma," DuVernay says people are asking if she can be their mentor, but she says that what people are really doing is going up to a complete stranger and asking, "Can you care for me?" A mentor should be someone who "feels something for you." She has more mentors now that she is writing and working on projects.

For DuVernay, "Selma" was "The first time I made a movie legally." She couldn't push Averick to work until it was done. He was now a member of a union and they had to log in hours. Even though the budget for $20 million (compared to the $200,000 budget for "Middle of Nowhere"), it was still a limited budget because of the logistics of renting places like churches and feeding all the people and dressing them in period clothes. Compare that to the estimated $44 million for "The Interview." But she added, "the best creativity happens within limits."