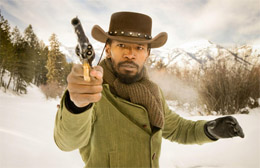 Quentin Tarantino's "Django Unchained" (2012) is a very good Tarantino movie. Save for "Pulp Fiction," I tend to appreciate and respect Tarantino movies more than I enjoy them. "Pulp Fiction," however, was so entertaining that I did not want it to end. Such were my feelings with "Django Unchained." As a mash of bloody pulp cinema with great aspirations, it is as entertaining as anything I have seen from Tarantino. For Tarantino diehards it is as Tarantino-esque as everything else from him.

This is the story of an 1858 partnership between a German dentist-turned-assassin Dr. King Schultz (Christoph Waltz), seeking the help of the enslaved Django (Jamie Foxx) to track down a trio of bandits hiding somewhere with whips and pistols among the plantations. Their journey soon shifts to a scheme to find and free Django's wife Broomhilda (Kerry Washington).

The acting in this movie is outstanding. Jamie Foxx invokes the silent stern stare of Eastwood's nameless gunslinger, mixed with the confidence of a 1970s cop (though, on a side note, it is the damsel in distress, Broomhilda, whose surname is "von Shaft"). And consider that we are speaking of Foxx, who despite early moments in his career getting criticized for his portrayals of African American characters, has since earned nearly every possible media award. We are watching a hero in multiple ways. 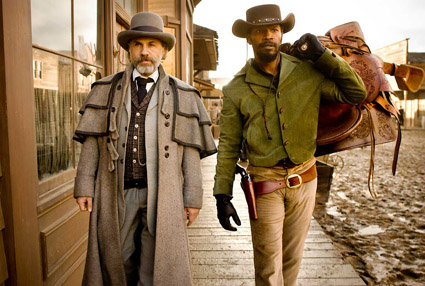 I knew this movie would win me over in the first few minutes, watching Foxx step out of his shackles, throwing off his blanket as a newly free man. He has the slow, deliberate gate of a determined hero, and the scars of whippings. It is as though Foxx has captured the raw muscle of that powerful first scene of Tarantino's "Inglorious Basterds" into one quick slow-motion gesture.

But, Schultz himself, dressed in thick beard, long hair, fitted suit, polished tongue, and clever strategy, captivates us with his choices, shifting roles from liberator for Django to mentor to partner to servant to redeemer. There is a developing narrative from film to film with his roles. In "Basterds," his Hans Landa was a bloodthirsty, merciless killer, a Nazi, eventually hooked. Here, still a killer, he has a German Enlightenment conscience and moral code that he redirects through rationalization. Meaning, he is a bounty hunter, though he is killing killers; who cares if they might have reformed themselves.

And such delicious villains. While Don Johnson (Big Daddy) is the smiling Plantation Owner enjoying the comforts of a Confederate lifestyle, DiCaprio's sharp-eyed Calvin Candie takes his power to its brutal, logical conclusion. Johnson has that organic Southern dignity that somehow justifies the inhumanity in his field. DiCaprio, on the other hand, commands his place of Privilege at the top of a eugenically modified food chain, with the support of his servant Stephen (Samuel L. Jackson, of especially powerful tone, but distracting makeup). Candie not only runs his "Candie-land" plantation; he invests in African-American men as combatants for an after dinner, parlor room version of a "mandingo" dog-fighting league. I do not know how many different types of disgust - visceral, moral, etc. - I felt, while also wondering how different those fights were from the many boxing matches I have watched. 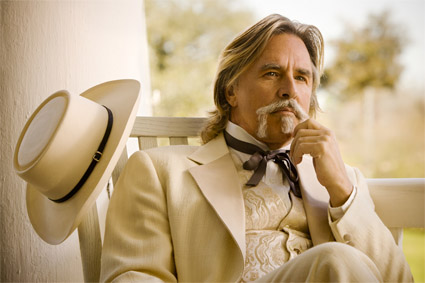 And, as a Tarantino film, it loads us with all types of excessively bloody violence. Maybe it is parenting or piety, but I no longer have the iron stomach to digest violence. It may be that if I screened "Pulp Fiction" again, I would not be able to complete it. But, in that film and in this film, Tarantino's play with violence seems appropriately fitting in our recurring, yet incomplete and inconsistent and at times dishonest national conversations about guns in America.

We find every type of violence in this film. Sometimes it forces us to cringe; I had to squint to obscure some moments, or look away during others. Sometimes the violence forces us to laugh because it gets so excessive that it becomes cartoonish. Sometimes, however, as a tale of vengeance it invites us to celebrate.

There is a moment when a horse gets shot in the face, and the audience gasps, and I started laughing at the absurdity. That the horse got shot was troubling, but we were all so accustomed to movie murder that the other shots hitting the humans should offend us, but of course did not generate such a response.

Not all the violence involves guns, for we have killer dogs, wrestling bloodsports, rapes, and, most of all, this is a film about slavery. The deeper problem in our culture is not the guns, but the culture of violence. Tarantino is both a contributor to our bloodlust, as well as a commentator on it. We might say the same thing, or more, about the violence in "Basterds."

But, watching this film, starting right from that moment with the blanket, this film taught me something seemingly obvious about our culture. While we say, in praise or repudiation, that ours is at heart a capitalist society, that is not accurate.

Deeper than the philosophy of business is that ethos of altruistic self-determination. Meaning, the people we respect in our culture are not so much winners or the wealthy, for we would then celebrate the Plantation Owners. We recognize their innate desire to be masters of their domains. But, we celebrate people (usually men) who seem to live the lives they choose to live, on their own terms, while in that process, they benefit others (sometimes at the cost of their own lives).

So, either you are selfish or selfless, and either you are a master, or you are a servant. It follows, then, that many of this film's comic moments involve men who have handed over their own self-determination. Ready to launch a raid, our plantation owners and dwellers struggle with their masks, blaming wives for poor craftsmanship. Much later, Samuel L. Jackson is Malcolm X's House Negro, at times earning cackles from the audience. Watching this film, I began to think about how many South Asian celebrities suddenly came to mind, who are so wealthy yet seem to choose to be chained.

Thus, that culture of mastery also gives us a hint about the roots of our problems of violence. This film loads itself with altruistic violence, if there can be such a thing. But in this film, we watch the clash between those who exercise their masculine mastery over others, against those who exercise their masculine mastery to serve others. Through this film's lens, then, a source of violence in our culture is an innate need to dominate or to refuse domination.

And that appreciation for self-determination also speaks to Tarantino and auteurism. Part of the appeal of Tarantino is that he seems to make his movies his way. His films mimic the movies we often ignore, featuring actors we've discarded, yet we call his films masterpieces. And, how rare is it that we see a movie, aside from documentaries, about American slavery? How bold is it that Tarantino chooses to speak to it! 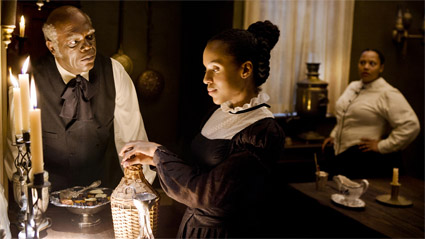 It is not easy to assess Tarantino movies, except against each other. He is one of those auteurs using his own techniques to make movies that primarily attract his own following. How many American filmmakers are there on this very short list? Perhaps John Waters, Kevin Smith and Spike Lee, though none of these directors is very active today (at least as feature filmmakers). It is far easier to objectively assess something from Scorsese, Spielberg, or the Coens than it is to assess these auteurs.

But, there are those universals. This film is vastly entertaining. It had me continually asking what would happen next. You can rarely predict what will happen in this film, and you most certainly will want to know. And, that Tarantino dialogue remains so vibrant. In Spielberg's "Lincoln," our characters seemed to jump into soliloquies in every setting. It also happens here, though we do not notice it.

You may have noticed, also, that thus far I've avoided the more common questions explored in essays about this film, those related to slavery and race. "Django Unchained" is so captivating that it will generate a profit, and I hope that it will inspire more films about slavery, race, and their legacies. Otherwise, the conversation will end as soon as we shift to the next big movie. I know racism and bigotry all too well, but as a South Asian, this is a conversation I am part of only secondarily. Similarly, a major reason I have mostly avoided the conversation is that my colleague and dear friend Steven Boone has already written something better than I could have.

But, a lesser reason is that the conversation is selective. As is their wont, many bleeding liberals will jump in celebration of this film's social commentary, perhaps not noticing that while this movie has the prominent House Negro character, "Inglorious Basterds" does not have such a vivid, parallel character (nor would we want to see one). Of course, that is not nearly as absurd as the Tea Party Nation posting arguing that the Holocaust was worse than American Slavery, because the goal of the Holocaust was to kill, while the goal of Slavery was to keep slaves healthy and working. I hope that I do not need to express all the levels of bizarre offensiveness of these points.

Or, consider, that if we take the film's narrative to its fulfillment, then Django would now be the Wanted murderer, followed by another set of bounty hunters, and would, potentially, not be free. Of course, that would be the natural plot for a sequel. Or, we might notice the expected Liberal silence over the complete lack of any major sympathetic White American characters; the closest would be the German immigrant. Still, almost all the African American and White characters are a backdrop anyways. Or, moving the conversation on bigotry beyond "Django," we might notice the silence about the bigotry in Ben Affleck's "Argo." But, these are not complaints about the film as much as they are complaints about holes in the conversations.

More than that, however, these would be matters of bigotry, not racism. Thankfully, the film does thoroughly understand something that "Lincoln" did not explore, that the difference between racism and bigotry is that racism involves power and mastery, that the violence of slavery and racism is not only the physical subjugation, and not only the psychological dehumanization, but also the privilege exercised in the process.

So, despite how much I am praising this film's entertainment, and its complex exploration of slavery, race and privilege, I must say that I frowned, clenched my teeth, or held my breath every single time I heard the n-word, and every time I heard any of the enslaved use the word "Sir."