What a nice guy Bernie Tiede is. He is so nice and sincere that you cannot possibly imagine him doing something bad to you. Based on a weird real-life crime story which was quite a bit stranger than fiction, Richard Linklater's quirky black comedy "Bernie" (2011) keeps its straight face just like its odd hero even at its most outrageous moment, and we are both fascinated and amused by his story and the colorful background surrounding him.

Jack Black, in one of the best performances in his career, plays Bernhardt 'Bernie' Tiede, who has always devoted himself to being nice to everyone in Carthage, Texas since he moved to the town. He has worked as the assistant funeral director of a local funeral home, and his employer tells us how he was lucky to have an ideal employee like Bernie. He is a knowledgeable expert on how to make the dead look good no matter how they died. He can persuade any customers to buy a more suitable (and more expensive) coffin instead of cheap ones because these coffins show genuine consideration and care to them. The funerals are done smoothly with his painstaking care and attention to details, and he always finds something to be improved in the ceremonies. My dear friend late Roger Ebert said in his review that he would buy a used coffin from him; Roger, I would have hired him for you and your wife Chaz if I had been able to. 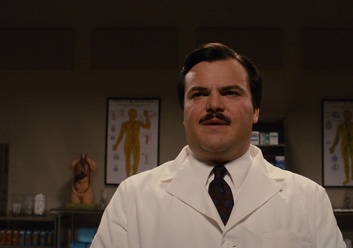 Everyone in the town loves and likes him even though he is an outsider coming in from Louisiana. He can start a conversation with anyone within seconds, and one scene shows him giving a bunch of oil company workers a useful advice on tax deduction. He is a diligent churchgoer, and he is always the lead singer in front the choir whenever it is the time to sing the hymns together. He also actively participates in the local musical productions; he initially started as a minor helper, but soon he becomes not only a director but also a lead actor.

While he is popular especially among the old ladies in the town because of his splendid job at the funerals, he does not seem to be interested much in them or young ladies. The people in the town naturally have some idea about his sexual preference, but everyone still likes him anyway despite the gossips and rumors being passed behind fences around the town ("In a small town, people will always suspect the worst of someone. But they'll also suspect the best."). They take that "Don't tell, Don't ask" attitude, and so does the movie, which does not delve too much into that aspect.

And then he gets involved with someone in the town, and everyone is rather surprised because she is everything Bernie is not. Mrs. Marjorie Nugent (Shirley MacLaine), who recently becomes a widow after her husband's death, is the most hated person in the town. Her husband is a rich businessman who always loaned out money to the town folks through his local bank if it looked like a good investment, but now she makes it her personal business to reject the applications for loan whenever it is possible. Even her 'close' family members do not like this old mean hateful lady much; both her son and her sister have been estranged from her for years, and her granddaughter once sued her when Mrs. Nugent froze the trust fund for her. 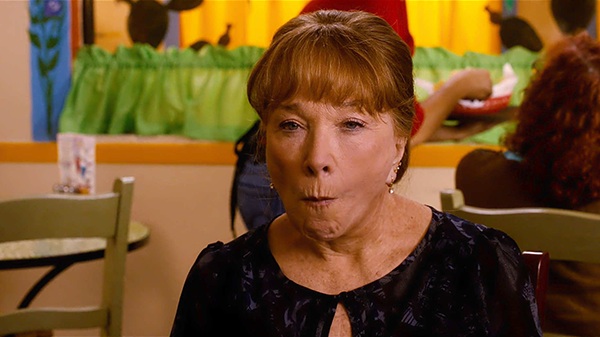 Despite her notoriety as a harridan as vicious as the Wicked Witch of the West, Bernie approaches to Mrs. Nugent as usual after her husband's funeral. Of course, he does not get any favorable reaction from a bitter (and mean) woman, but his earnest persistence somehow scores some points from her, and, what do you know, he soon becomes a fixture in her big mansion because her cold heart is genuinely moved and melted by the warm attention she has never gotten during her last 50 years. Shirley MacLaine willingly throws herself into a pretty unlikable character, and she gives a spiky comic performance occasionally brightened by a few moments of tenderness glimpsed from her strict face.

She becomes happy to be with Bernie, and so is Bernie, always glad to be at her service. They attend the concerts together, and they also travel around many places outside Carthage and the U.S. They have a really good time with each other while enjoying the first class airplane seats, the five-star hotels and resorts, the expensive restaurants, and the joint massages at the spas. They always sleep in the same room during their travels, and, according to a rumor going around the town, it seems Mrs. Nugent wants him to be more than an average companion, but, seriously, I do not want to know more about that. 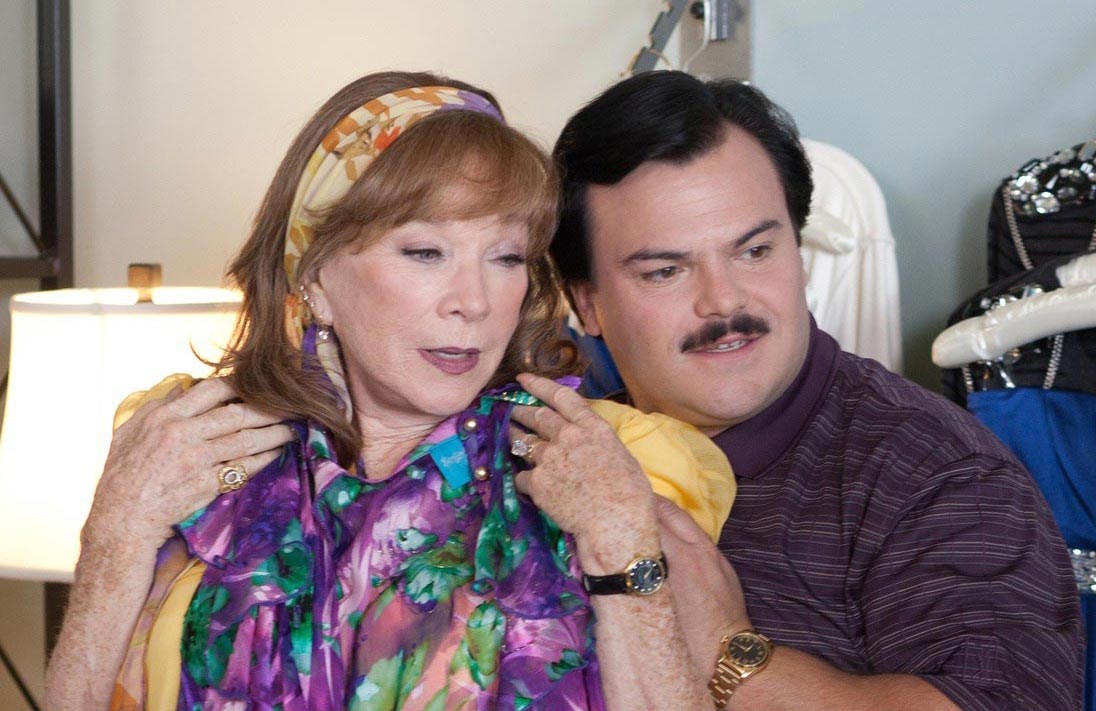 In spite of all these changes, Bernie remains as the most likable guy in the town for he is as generous as before to the town people. He receives lots of expensive things from Mrs. Nugent as staying around her, but he is not a greedy guy at all, and he gives most of them to others. He keeps working as the assistant funeral director, and he continues to participate in many town activities, and nobody says any bad word about him or his relationship with Mrs. Nugent, who becomes a little nicer than before while being with Bernie.

It looks like everybody is happy, but it isn't so. Mrs. Nugent becomes more possessive and abusive as the time goes by, and Bernie's daily routine is frequently disrupted by her constant demands. He naturally feels like being exhausted and suffocated, but he cannot leave her because it is against his good nature and principles. On one afternoon, he suddenly comes to the breaking point after he realizes he will never get away from her as long as she is alive, so….

What follows after that breaking point is a hilariously bizarre circumstance drenched with absurd black humor, so I let you discover how funny it is for yourself. The director/co-adapter Richard Linklater, whose screenplay is based on the 1998 Texas Monthly magazine article "Midnight in the Garden of East Texas" written by his co-adapter Skip Hollandsworth, keeps his movie tip-toeing between morbid humor and dry drollness as it goes back and forth between the main story and the interviews with the town people and other characters involved with the case and the following trial, and this documentary-like approach is the constant source of amusement and laughs.

I heard that it was difficult for Linklater to get his production financed because the screenplay looked plain and dull on the surface. It really could have been like that because the story itself does feel like another routine episode from one of those TV documentary programs about sensational real-life crime cases, but Linklater imbues his story with a delicious local flavor through the locations and his cast. I particularly enjoyed the interview scenes with the town people, which reminded me of that fascinating oddness observed from the Southern town residents in Errol Morris' short documentary "Vernon, Florida" (1981). Although they are actually the mix of the real town people and professional actors, they all look uniformly real as the people who have been living in the area for years, and the way they seriously talk about Bernie, Mrs. Nugent, their town, and other things is fun to listen and observe. I do not know whether Texas is really divided into several areas as told by one town folk, but it is certainly amusing even if it is not true.

Jack Black, who successfully collaborated with Linklater in "School of Rock" (2003) before, pushes his ingratiating persona to the new dimension here in this film. While he looks a lot different from the real-life counterpart of his character as shown before the end credits, he convincingly embodies a likable and courteous guy compulsively driven to be nice and generous to the others around him. He might hate Mrs. Nugent for a moment, but he still wants to treat her nicely even when it doesn't matter to her any more under his irreversible situation, and his 'nice' behavior ironically puts him in the circumstance far worse than it could have been.

His odd nicety is well countered by the acidic meanness effectively personified by Shirley MacLaine. I recently watched Alfred Hitchcock's "The Trouble with Harry"(1955), and that cheerfully morbid black comedy reminded me of how young MacLaine was in her debut film. Now more than 55 years have passed, but MacLaine has lost none of her comic talent as shown in this film, and she has lots of fun with her detestable but understandable character. According to a New York Times Magazine article written by her nephew, the real Mrs. Nugent was a really insufferable woman, and I was personally tickled by one comment from the town people in the movie: "There were people in the town, you know, that would shot her for five dollars, you know." 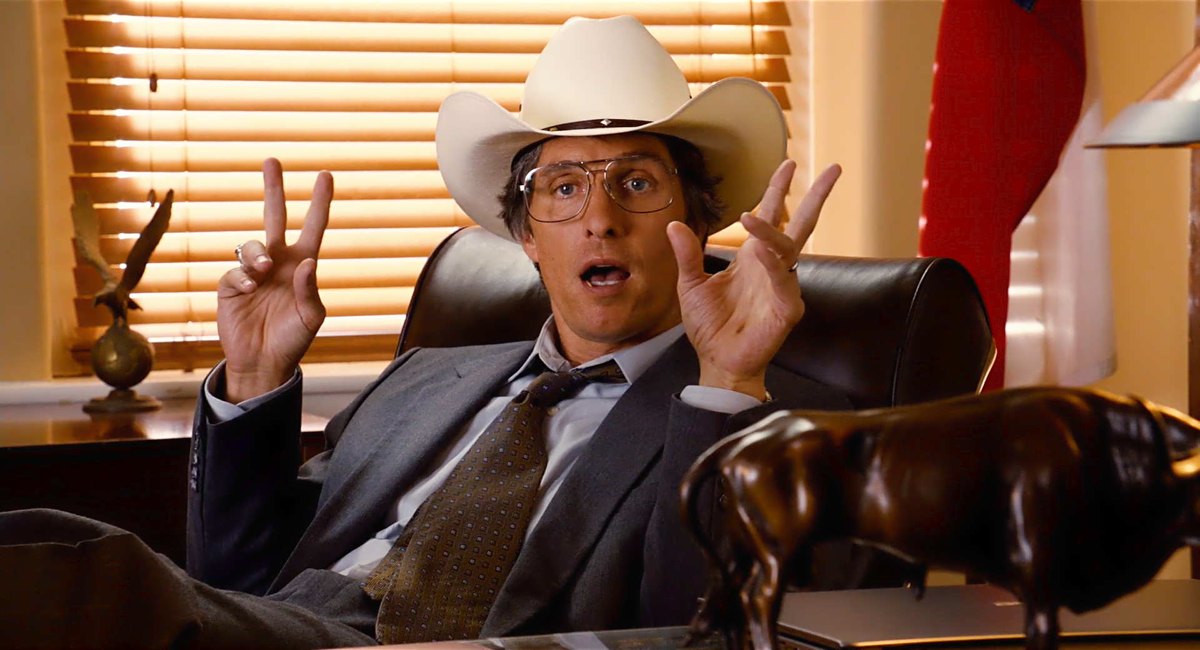 As the people associated with Mrs. Nugent, including her stockbroker Mr. Hornbuckle (Richard Robichaux), become very suspicious about her continuing absence for several months, the district attorney Danny Buck (Matthew McConaughey) comes into the picture. McConaughey, who has recently kept getting the roles he is born to play, depicts his character with that slick Southern charm amply exuding from his screen persona, and he relishes every moment he appears in the film. Although Buck goes a little too far in his obnoxiously self-righteous way for the justice and his reputation, I must say he has a good point when he replies to the town people asking him not to be too harsh on Bernie (A small trivia: one of them is played by his mother Kay McConaughey).

Richard Linklater, who has been making interesting films including "Waking Life"(2001) and will soon come to us again with his latest film "Before Midnight" (2013), makes a droll black comedy full of many weird turns, and Jack Black gives a terrific comic performance which deserves more attention. Even when he is arrested and then locked up in the county jail after full confession, Bernie occupies himself with teaching cooking to his fellow inmates, and he never loses his amiability no matter what happens to him. Sure, he did commit a crime to be judged, but he's still the guy for your funeral.