A man living at the edge 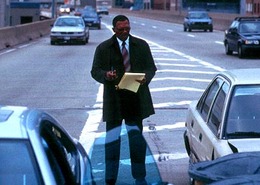 Hi, this is Gerardo Valero and today I'd like to talk to you about "Changing Lanes" in which Ben Affleck plays the typical bright but self-absorbed, school-smart Yuppie who gets to marry the boss' daughter but his knowledge of the ways of the world are rather limited, especially since he's mastered the art of lying to himself all his life. His best friend and ex-lover played by the always excellent Toni Colette is much more self-aware than him but she doesn't have his ambitions, or simply put, she knows the ways of the world too well to want anything to do with what it would require from her, to take the next step in life. It is only because of her love for Banek that she tries to help him by providing ill-advised solutions to his problems, which despite her good intentions only make things worse.

His bosses are so very good to him but only as long as he remains in line as shown in scenes when Banek starts to question what they're asking him to do. One of them also happens to be his father-in-law and is played by the renowned director Sidney Pollack. Now, if you are watching a movie and you learn Pollack has been cast, you can make sure there is a part in it of a shark as very few have actors ever played one as well as he does. Banek's bosses are taking advantage of his naivety, Banek himself took advantage of a sick old man, and the old man in turn took advantage of the people who worked for him. Does this knowledge justify their actions?

Samuel L. Jackson plays Doyle Gipson as a man very much living at the edge, a man full of demons who is described by his own ex-wife as "addicted to chaos." All this may be completely true but it is also impossible not to sympathize with him for the simple fact that he is a very, very good man. Besides, life seems to have been dealing him one negative card after the other but maybe, just maybe, this incident will not end up being one of those as hard to believe as that will be throughout much of the film. 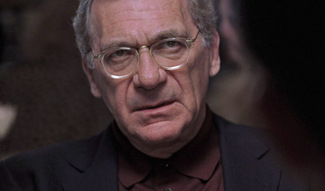 Changing Lanes, like "The Verdict" which I reviewed a few months back, is another film in which a simple statement by a secondary character that holds the complete truth of what would have been the solution to all of the conflicts in the film: "maybe you could try been nice to him" says the computer hacker to Banek though this doesn't necessarily mean he believes it himself. Maybe it's for the best for both of them; it certainly was for the film. 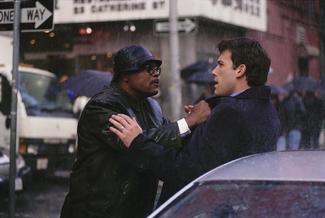 In this excellent though rather underrated film, Ben Affleck's Gavin Banek will have a minor traffic accident with Doyle Gipson, played by Samuel L. Jackson, while they're both on route to their own equally, important appointments (coincidentally, at the very same location) but his egotistical nature will prevent him from uttering the four simple words which would have kept the matter from remaining a mere triviality: "where are you headed?"; instead, he abandons Gipson by the side of road but also inadvertently leaves him with a personal document, "the file," which becomes the film's Maguffin and the object of their own personal mini-war that will keep on escalating until the end of the movie when both will reach the brink and only then simultaneously take a step back and relent. By that time the relevance of the document will have faded but both men, who come from totally different worlds and otherwise would have never met, will have been forced to take a hard look at themselves in the mirror. It will only take them a few hours to realize what they weren't able to, in every day prior to this. 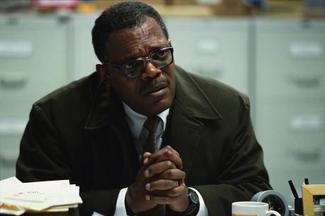 Despite each and every one of the awful things that happens to both characters throughout the film, both will end up gaining overall from the experience. Gipson will stop allowing his demons from taking over and instead will start acting in accordance to his evident inner goodness; he'll no longer blame everybody else but himself for the chaos that seems to follow him throughout his life. Banek will manage to figure out the world of cheaters he chose for himself long ago and accept the cold facts about whom it is that he is really married to: a woman able to describe his infidelities as nothing out of the ordinary and who is not the naive person he always thought he knew (and certainly not the caring friend that his lover happens to be). Further, when he finds himself having dinner with his in-laws and wife at the end of this, the defining day of his life, the events he's gone through will allow him to be the one to establish the basic rules under which they all must live under if their relationship has any chance to go forward at all, especially the marriage itself. 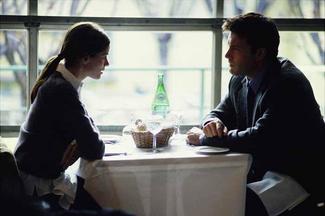 "Changing Lanes" manages to be a very entertaining and effective morality tale in which some of the character's actions might seem a bit far-fetched to the audience (think loosening the bolts off somebody's tire rim) but at the same time, others won't feel too different to the decisions we often get to make but which we don't always recognize at the moment as life changing. The simple choice of adding another signed page to a copy of the much discussed "file," an incomplete copy of the Maguffin, proves how thin the line between good sense and perdition can be.

The film asks us to question if there can ever be a better way to defend those types of actions other than with reasoning similar to: "nobody will get hurt," after all, in the grand scheme of things, how much can this world be affected by Banek receiving his father-in-law's hand-me-down yatch? We see him beginning to master the art of lying to himself: "we'll, he did sign it" is his reply to whether his client was mentally aware of what exactly he was doing when providing his law-firm total control over his fortune; later on we hear his father-in-law/boss give a much better (and more prepared) answer on the same subject: "at the end of the day, I think I do more good than harm." The movie does a great job of showing us how, once the line is crossed, people can only get better at fooling themselves with time.

Unfortunately, it is in the film's final scenes where I did find some unconvincing moments. Even though the Banek character gets the upper hand over his bosses and is able to force them to return what they wrongfully took, after getting to know his shark of a father-in-law throughout the picture, it seems unlikely to me that he would agree to return a dime without kicking and screaming, much less agreeing to do so while smiling. I also have my doubts Gipson's wife could be convinced by a total stranger to change her mind about her husband but at the end, these are both minor quibbles and "Changing Lanes" does end the best way it possibly could.

Was there a concrete reason for setting the movie on Good Friday? Even without taking under account the evident, constant battle between both characters' "little angels and demons," there are indeed several religious images throughout "Changing Lanes" and my guess is that Michell tried to make a not so subtle parallel between both characters escalating wrong-doings and Christ's dying for our transgressions, not unlike the ones depicted here, only for them to end the film by actually achieving a redemption of sorts similar to Christ's resurrection, which for both characters in the film seemed so elusive throughout this day, even in moments such as the one when the movie manages to casually place the character played by Affleck (a non-Catholic, I think) inside a confessional with a priest, no less. Additionally, and this might be stretching the point a bit, each character is shown to have a guardian angel of sorts and even though the William Hurt and Toni Collette characters are clearly the soundest thinkers in the movie, the latter's advice will be corrupted by her own affection for Banek, with disastrous results. 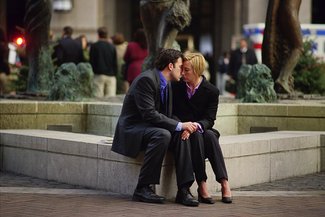 This is most likely Affleck's best film performance and one on which you could have predicted a long, successful acting career, unfortunately "Changing Lanes" was soon followed by "Daredevil," "Gigli," "Paycheck" and "Surviving Christmas" all of which many people panned but few actually saw and which proved Hollywood is not the most forgiving of places, one on which you can make all the bad movies you want, as long as they make money. I must admit even I had to take some grief myself for selecting this film for review: "you are going to waste a review about a film from the 'Pearl Harbor' and 'Armageddon' guy" a friend recently told me; I can't claim to even have seen any of the films from the first group (and would much rather have missed the two others) but what I know for sure is that in 2002 Ben Affleck managed to be seen in at least one remarkably good film which has absolutely nothing to do with those other throughout his career. Who knows? Maybe it was for the best that his career faltered from all these would-be-blockbusters as its recent resurrection seems to be coming from much more smaller, personal, quality choices.

During Ebertfest I was able to mention to one of the writer of "Changing Lanes," Michael Tolkin, how the movie is used in the business school I attended here in Mexico as a practical tool for analyzing ethical decisions in the workplace; he was rather surprised that it is used elsewhere but in those law schools in the US that he was already aware of, perhaps because the characters he created here are indeed lawyers. He shouldn't have been I think; the moral teachings of "Changing Lanes" are truly universal.