A lonely day in August 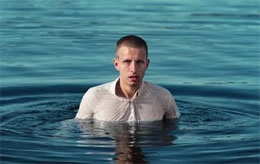 Sometimes movies provide the moments I empathize with even though I am completely different from their characters. I remember how I sympathetically reacted to one particular scene around the end of "The Hurt Locker" (2008) because I would also be at a loss in its hero's circumstance unless my family or others accompanied me. Several months after watching that movie, I thought about that scene after wandering alone around the aisles of a big supermarket in the suburban area of Des Plaines, Illinois for at least more than 20 minutes until I settled on a loaf of white bread and a bottle of marmalade after lots and lots of hesitation.

Among many terrific movies I have seen in this year, "Oslo, August 31" came close to me like that. I admired its close and honest observation on one summer day of its troubled hero, and, though I am not a drug or alcohol addict like him, I could instantly recognize the main source of his depression.

Having spent almost 13 years at the campus with no notable progress despite lots of expectations I received at the end of the undergraduate course, I frequently get a frustrated feeling similar to his mood as I bitterly observe the changed look of my campus and the absence of my fellow PhD candidates who have already advanced with further academic and personal progress. I tell myself that there is always hope, and that is true, but this melancholy always resides somewhere in my mind as I recognize my difficulty and try to continue my daily life at the campus as usual. 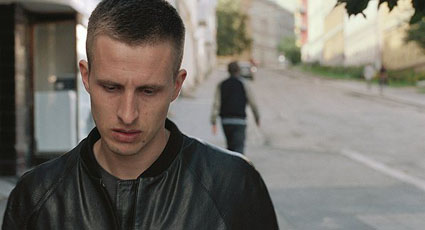 Such a moody atmosphere like that is hovering over Anders (Anders Danielsen Lie), who is finishing his time at the rehabilitation center outside Oslo. Regrettable and shameful about his wasted years, he wants to make a new start and leave behind his mess with addiction, but it is not so easy for him to begin a normal life again even though he has been clean for several months. He is confused and depressed about his current state, and, when his another gloomy day begins, he even tries to commit suicide by drowning himself in a river before returning to the center as if nothing happened. 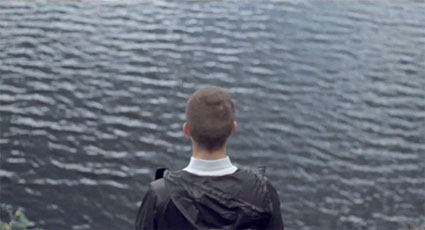 This day is important for him, for he will have a job interview in the afternoon at a magazine in Oslo. He gets permission to leave the center for a day along with money, and he soon arrives at the city where he grew up and worked as a writer. We see how he spends this day. He visits an old friend. He spends some time with his friend and the friend's family at the park nearby. He has his interview with the editor of the magazine. He goes to a restaurant for meeting his sister, who is supposed to give him a key for entering his family home. He has a rest for a while before he goes to the birthday party held at a flat belonging to one of his friends, where alcohol comes handy to others - and him. 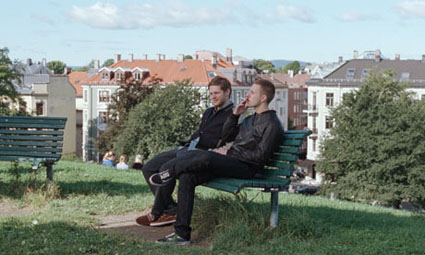 The story is as simple as I described above, but the director Joachim Trier and his co-writer Eskil Vogt unfolds a rich and engrossing character study from their simple premise,which was inspired by Pierre Drieu La Rochelle's novel Le Feu Follet." One of the best parts in the movie is when Anders visits his old friend's home. Thomas (Hans Olav Brenner) jovially welcomes him at first, but there is a certain degrees of nervous awkwardness surrounding them as they casually talk about their old times and Anders' recent rehabilitation process. While their conversation never feels too explanatory, the relationship between Anders and Thomas is clearly conveyed through their mundane dialogue, and we can sense that Thomas could have hit the bottom just like his friend did in their wild days.

Lie and Brenner look and talk naturally in their scenes as close friends who hung around together a lot in the past, and these two good actors charge the scenes with dynamic emotional interactions between their characters. Although Thomas shows care and thoughtfulness to his friend during their private conversation at the park, he is no big help to Anders, whose mind is still wandering with no particular plan for a new start. Thomas sincerely listens to his Ander's confusion and frustration, and he responds with some sound advice as a good friend, but he ends up confiding his discontent with his life to Anders. Yes, Thomas was luckier than his friend and he has nicely settled with a loving wife and cute little daughter, but he feels stuck in his daily life, though he is probably well aware that he is complaining about his normal life in front of a man far less happy than him. 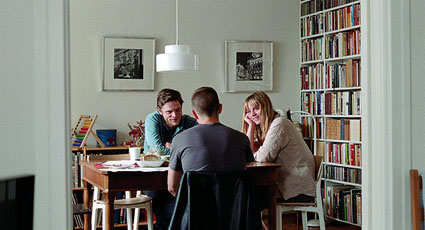 They part nicely in the end, but their cordial conversation only accentuates Anders' inner turmoil, and so do the city and its people he sees on the street. At the beginning, the movie opened with a montage of footage showing many sights of the city, and we hear a series of short recollections from the people who lived in Oslo in the soundtrack. The things have changed, and most of the people he knows, including his long-suffering girlfriend, have also changed. To a man who had not been right in his mind for nearly six years and then suddenly finds himself left far behind, the city looks alien at times as it constantly reminds him of the passage of the time along with how much he ruined his bright potential in the past.

In a haunting scene at the restaurant, he looks outside as he silently hears the conversations going on around him. One girl talks to her friend about what she hopes to do in the future, and that makes a poignant contrast to Anders' desolate state of mind. We hope lots of things when we are about to come out of our adolescent years, and we want everything we hope for to be realized in our future, but later we say we are fortunate with our life even if we get only one or two of our wishes.

It is lucky for Anders that he gets a nice chance for new job, but his interview with the editor only reveals that he really should have made peace with what he was before the interview. He comes to the editor's office with a nice resumé, but the editor inevitably asks about his unexplained absence during last six years. The editor is actually a generous man who willingly listens to a critical thought on his latest column, and he does not look shocked to learn that Anders is an addict, but Anders eventually botches up his interview not long after he uncomfortably admits that fact to the editor. From his troubling behavior, I could see why the first important step in AA meetings is saying "Hello, I'm (fill the blank), and I'm an addict." in front of his fellow addicts; if you are not entirely frank about yourself, you cannot deal with your problems no matter how much you wish to step forward to your rehabilitation. 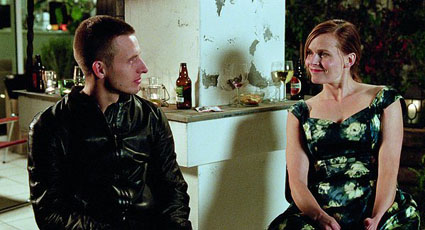 He is surely clean as he says, but he is not as ready to be sober as he tries to believe (another lesson: rehabilitation centers do not make you sober--they only give you a good chance to be sober and the rest of job is yours). That is why it's not so surprising to see Anders being unable to keep clean later in the movie. He looks more pathetic, dishonest, and unlikable as the day is ending and his urge is increasing, but, thanks to Anders Danielsen Lie's nicely nuanced performance, we come to understand him as a miserable human being on the verge of being swept down to another bottom by his personal demons. He can be a pleasant guy to talk with, and I came to worry about him, but I would sternly admonish him that he should take a biting comment thrown at him in one scene as a good lesson: "I've got friends worse off than you, but they don't behave like assholes."

In the end, the next day, August 31st, begins on the horizon, Anders remains as unhappy as before even after few "joyful" moments which may initiate another downward spiral in his scarred and fragile life. This sounds gloomy, but the movie is not entirely devoid of humanism and optimism, and Trier and his cinematographer Jakob Ihre look at the story, its hero and his surroundings with a remarkably calm, controlled, but intimate approach through their mostly stable handheld camera. In an understated but terrific long take to be appreciated more than once, we come to learn a little more about Anders' life with his family, who are incidentally not shown in the movie although being mentioned frequently throughout the movie. As far as I can tell from the movie, they did everything for him as his supportive family, and you will agree with me that it is Anders who should find a way to bring changes for himself, not them. 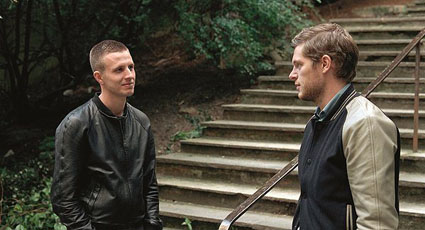 "Oslo, August 31" vividly presents us the anxiety, frustration, and depression addicts struggle with on their tricky road to recovery. I do not have addiction problem (although maybe I should admit that I am a book and movie addict), but I was recently diagnosed with depression, and I could understand a lot of what Anders is feeling and thinking as I was looking at his blank and confused face. When he said he contemplated suicide, it came to my mind that I have gone through that kind of thinking several times, although my dark contemplations and following attempts always end in farce a la "Harold and Maude" (1971). I sometimes talked about those attempts like jokes, but, unfortunately, the people around me seldom understood that I was merely trying to amuse them. (On the other hand, they did not take them seriously if I tried to be serious.)

I think now you worry about me a lot, but I assure you that I am a lot better than before in spite of another farcical upheaval around the end of this October. I had been medicated for a while, and I got my diagnosis, and I attended a weekly session. The doctor told me I had Asperger's syndrome (I have suspected it for years; I guess that explains why I was quite repulsed by that disposable Bollywood film "My Name is Khan" (2010). A recent reliable test result supported her diagnosis. The doctor, a very kind woman, later talked with my parents and my long-suffering adviser professor, and my parents were relieved, and I will part nicely with my adviser professor in the next year; we accepted that our academic relationship did not work and we settled on Master's degree instead of PhD degree. 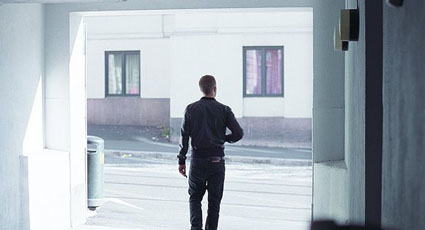 When we were talking about my latest problems and struggles, one professor I have known for years at the campus suggested to me that I should completely change my environment for a fresh new start. I am still not sure about accepting her advice as a guy who might have been stuck in one place and one field a little too long, but I think Anders really should accept that advice for a real change if he wants--after facing his problems more honestly, of course.