A bad night for the Warriors 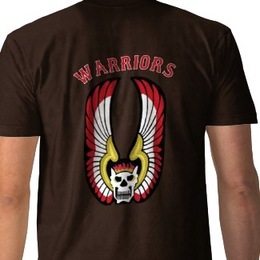 If one is to make a balanced judgment of Walter Hill's 1979 "The Warriors" it is crucial to view this film exactly for what it is, one of the most exhilarating and peculiar action films of the 1970s, famous for the riots it provoked but much closer to Greek mythology than to reality.

Clearly a cult classic, "The Warriors" can also be seen as simply a great "chase movie," sort of a concrete jungle's "Apocalypto." An unusual film even in today's terms, during times when we feel we've seen it all.

"The Warriors" follows the adventures of the group in what turns out to be a very bad night for them.

As they attend a summit of every gang in New York, where name tags apparently are not really necessary, the senseless murder of a prophet figure named Cyrus takes place just as the police raid the site, bringing along a state of confusion about what actually occurred there. Cyrus' goal was to reunite every gang in order to "take over the city" (what exactly for, is anybody's guess).

Just as the Warriors try to escape from the law, they are unknowingly framed for that murder which means they must make their way across the entire city in order to reach the safe haven of their Coney Island turf -- where oddly enough, they can feel safe, but first, they have to pass through the territories of several gangs as the constant presence of "the voice" (a semi-depicted woman who narrates the night's occurrences on the radio as if such were a sporting event) "spreads the word" that leads the various avenging gangs into a collision course with the title heroes. It would have probably helped the Warriors, and certainly the police, if they had occasionally listened to this particular radio station but let's remember we are talking about pre-internet, pre-cell phone, pre-a-lot-of-things times (though clearly, not pre-portable radios). 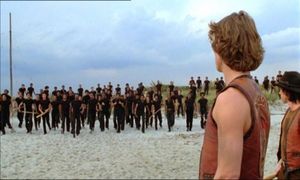 "The Warriors" was obviously shot in real New York City locations and it depicts the city and its subway system at its bleakest, dirtiest and most violent, hardly the stuff that could ever encourage outsiders to try it (I know it made me want to avoid it for years). Like "American Graffiti," "Eyes Wide Shut" and the "24" TV series, this is also one of those features in which the action takes place throughout the night and until the sun's dawn which was clearly the right decision as these characters simply wouldn't have looked right in plain daylight, curious though how, much as in these other examples, they make it through the night without having to take a nap or even yawning.

"The Warriors" wasn't cast with big movie stars nor did it need to be; none of its leads go on eventually to do anything bigger than "Xanadu" or Hill's own "48 Hours." This is simply a film with the right actors in the right roles and one which wouldn't have felt right with identifiable big name stars in it. It can be also be said that the creepy villain and the hot-head Warrior, played by two of Hill's regulars David Patrick Kelly and James Remar, clearly got the scene-stealing parts, in contrast, it's hard to make much of the Swan and Mercy roles (Michael Beck and Deborah Van Valkenburgh) the main players of the piece, she clearly wants to be with him, the Warriors fill-in leader, but he acts as if his gang responsibilities had forced him to take a celibacy vow and rejects her advances, only to later be moved by her affliction at not being as good as the rich prom girls they meet in the subway, leading Swan to allow her to walk by his side in the movie's final scene, at sun's dawn by the beach in Coney Island; don't worry if all this doesn't make much sense to you, "The Warriors" was never intended to be a movie about complex human relationships. 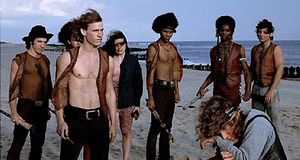 Perhaps the easiest criticism that can be made about the "The Warriors" is how dated it feels today; it's fair to say that it looks very much like a film of its time, Back in the late 70s the exposure to gang films by movie audiences had been mostly limited to less elaborate displays (and definitely tamer ones) such as "Rebel without a Cause," "The Wild One" or even "West Side Story" but what then was considered innovative or even cool today merely seems curious (to put it kindly). On a recent viewing of "The Warriors," even one of the movie's biggest assets, the much discussed fight scenes, seemed somewhat tame when comparing them with many recent action films: extremely well choreographed but maybe a bit over-choreographed as well, almost like this strange group-ballet, If there is such a thing as a movie that glamorizes violence by making it seem beautiful and exciting, this is clearly it. Still it's fun to see the weaponless Warriors manage to obliterate the gang on roller skates though with the aid of what appears to be a lapse in the earth's gravity force (or simply well hidden trampolines).

What makes "The Warriors" outstanding however is its energy, its original oddness, the way it touched a nerve with members of the audience who had nothing to do with gangs and yet, made them identify with these people instantly; how else to explain the feelings it awoke in some of them of wanting to belong to groups like these? (and beating each other in the process). The film however isn't the best place to search for reality, otherwise the questions of how these guys finance their uniforms and where they get them made (they sure seem to spend a lot of time designing them), what exactly they do all day, what's the point of hanging around together, etc., etc., might come up. Let's just say "The Warriors" made its mark, it entertained audiences and it is well remembered and loved, especially by those of us who got to see it when it first came out. More than enough reasons for me to recommend it.