Last week after the premiere of “Southside With You,” I moderated a Q&A panel in Chicago for Richard Tanne’s lovely film inspired by the first date of President Barack Obama and his now wife, First Lady Michelle Obama. The panelists consisted of Richard Tanne, who makes his directorial debut; Tika Sumpter, who plays Michelle Obama, and is also a producer of the film; Parker Sawyers, who plays the young Barack; Vanessa Bell Calloway, who appears as Mrs. Robinson, Michelle’s mother; and John Legend, who wrote and sang the romantic ballad “Start” at the end of the film, and was responsible for the film’s score. The film opens this weekend and I highly recommend it.

I don’t moderate many film panels outside of film festivals, but I said yes to this one after seeing what a delicate and beautiful story it told. We don’t see many characters like this on the screen, two African-American professionals who are just walking and talking and exploring the boundaries of their work and personal lives while gently falling in love. It will probably elicit comparisons to Richard Linklater’s “Before Sunrise,” and to a lesser extent, “When Harry Met Sally.”

The story is not a documentary, but was “inspired by” the Obama’s first date (for who really knows what they said to each other). Remarkably, Tanne manages to squeeze in credible events and conversations. Barack takes Michelle to visit a museum exhibiting works by Black artists before attending a meeting of residents in the Altgeld Gardens housing development where the President was once a community organizer. The Obamas have previously discussed their date to see Spike Lee’s “Do The Right Thing.” That excursion makes it into the movie, as well as the documented stop at the Baskin & Robbins ice cream shop in Hyde Park, which today displays a plaque of the visit. The fact that we already know that the relationship will take them all the way to the White House adds an underlying layer of heightened realism and historical poignancy. I approve of Tanne’s wise decision not to take the film beyond that first date. He gives us a succinct, intimate snapshot of two people getting to know each other, and that portrayal is sweet and to the point. 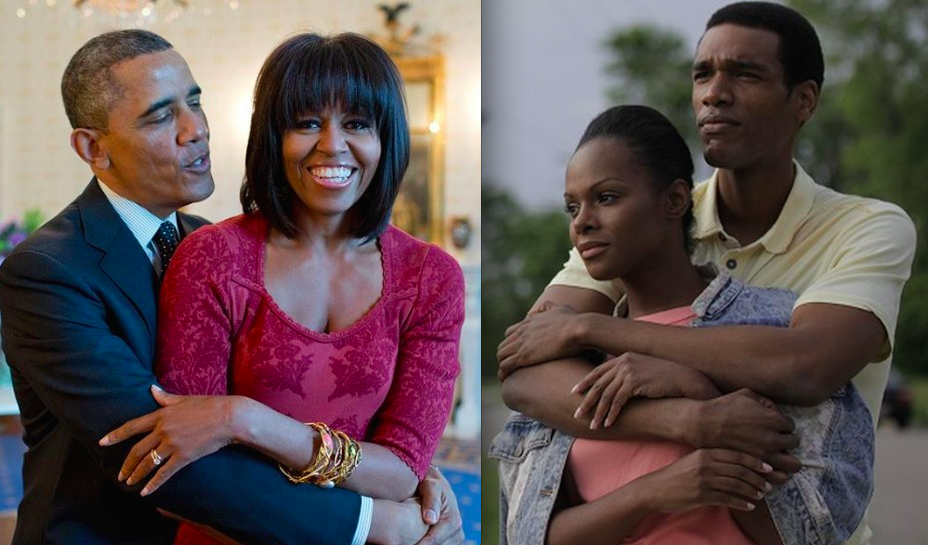 This article is not an "official" film review. That will be written for Rogerebert.com by Odie Henderson. I will say, though, that the film gets an unqualified “Thumbs Up” from me. And I especially liked the fact that Parker Sawyers didn’t attempt an impersonation of the president, but exhibited his own acting chops in portraying a young man who was confident and comfortable in his own skin. And  I admired Tika Sumpter's beauty, grace, intelligence and strength in her portrayal of the young Michelle Robinson.  This article is also not a report about the interview with the cast of the movie. That will be reported by Nick Allen, who saw the movie at Sundance earlier this year and fell in love with it.

I am writing this article because this movie is now on my list of films that made me feel an undeniable elation watching the origins of a love story. Richard Tanne said he was inspired to write it after watching how the President and First Lady flirt with each other. I find it refreshing that Tanne gives us a movie that you can take the whole family to see. And really, who wouldn’t want to witness that kind of playful relationship between a future president and his wife?

A bigger reason for writing about this movie is the hope that it can put the viewer in touch with the tender points in their hearts. I get soul-sick reading daily stories and seeing visuals about gun violence in Chicago. Being fed a steady barrage of this can turn your heart to stone. I don't want the children of Chicago or our nation to think this violence is the norm. I don't want them to walk around in fear of going out to play, fear of walking to school, fear of each other. I am so grateful that Richard Tanne presented the other side of Chicago, especially the southside, with cultural activities and peaceful neighbors, and the daily activities of life that have nothing to do with guns or violence. I want children to see something on the screen to give them hope that just maybe if a man can go from being a community organizer in Chicago to occupying the White House, there is a chance for them.

I also want them to see the graceful Michelle Robinson talking about making a difference in the world because of the work ethic taught to her by her father who toiled every day for the city despite the challenges of his Multiple Sclerosis. It is said that if you can see it, you can be it. I want the young people to find the softness in their hearts, especially Chicagoans. Is it too much to ask that "Southside With You" becomes more than an entertainment, but also a vehicle of hope?

There is another reason I wanted to moderate the panel—the year of their first date was the year that I also met the future president for the first time. But it is also the year I met my future husband, Roger Ebert. I joked that although I met the President before I met my husband, Michelle had him first. And it is only a joke, because we both ended up with exactly the right man for us, and we both married those men the same year: 1992. 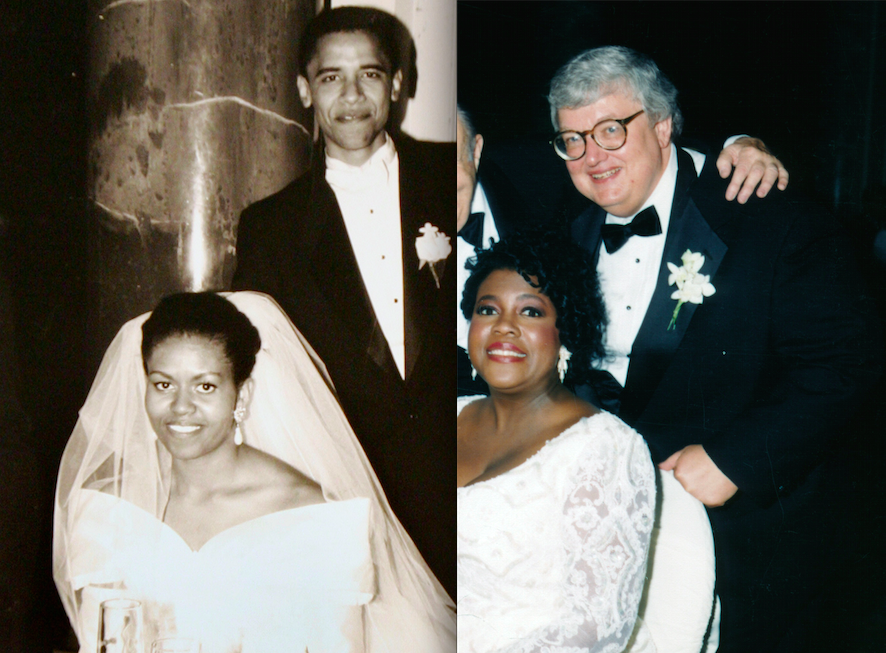 In 1989, I was still practicing law and I went to the law firm of Sidley & Austin to take a deposition. When I arrived, I was told that the lawyer who was to produce her client for deposition wasn’t in, but had arranged for someone else to speak with me. I was standing there angry, arms crossed, waiting for an explanation. Why didn’t someone call to alert me that the deposition was postponed? I was standing in the hallway outside of the conference room when I noticed several lawyers rushing to stand by my side. But they were looking down the hallway and murmuring in tones of admiration, “Here he comes. Here he comes!” This piqued my interest, whose presence were they heralding? Why were they being so adulatory?

My eyes followed theirs and I spied a tall slim figure walking smoothly toward us. In my memory, he seemed to be gliding as if he was being pulled along on a dolly like one of the characters in a Spike Lee movie. That’s just how smooth he was. He stopped in front of me, beamed a blindingly bright smile and stuck out his hand, “Hi, I’m Barack Obama..” I was immediately struck by his good looks and charm. He conveyed the lawyer's apologies and offered to reschedule the deposition for the next week.  At the time I was a bachelorette, divorced. “Hmm…,” I thought, “I wonder if he is single.” But I merely returned the handshake and thanked him for telling me. After all, I was a professional litigator and so all he saw was my poker face.

As I was being escorted to the door, I understood why the lawyers were gathering around this young man. There was something about him that was different. He was confident without being arrogant, charismatic, and had that je ne sais quoi. When I went home, I told a friend that I met a man who could be the President of the United States one day. Yes, I said that, back then. Even though in 1989, I had no real expectation that I would ever see an African-American President in my lifetime. In 2004, Roger went on the Howard Stern Show and said, “We have a guy that’s going to be in the Senate from Illinois named Barack Obama, who’s going to be, I think, very important to the future of this country.” What was it that caused people to make those predictions about him? I don't know. 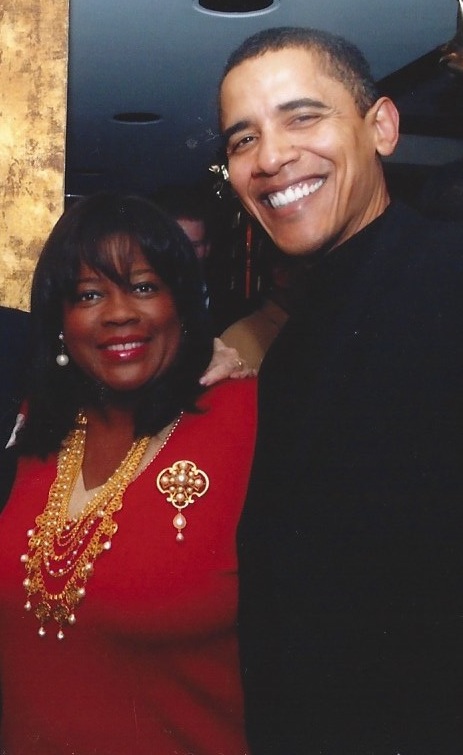 The next week when I spoke with the lawyer, Pamela Strobel, I discretely asked about him. She told me he was a summer associate. I told her I had never seen partners in a law firm act like that over a summer associate.  But then she clammed up and pretended she didn't know the real information I was seeking about him--whether he was available. And since we were representing opponents in a lawsuit, I didn't push the issue. I just wouldn't cross that professional line. Strobel and I laugh about this now. She acknowledges that she was toying with me at the time.

Many years later, I recounted this story to then-Senator Barack Obama, who was running for President, at Linda Johnson Rice's (Ebony magazine) Christmas party. I usually don't name drop, but during that retelling, the audience was Michael Jordan, Oprah Winfrey, Valerie Jarrett, Christie Hefner, and others too numerous to name. Someone, I don't remember who, interrupted the story to say, "Just think Chaz, you could have been..." But being ever the gentleman, Senator Obama quipped, “I could have been the most famous film critic of all time!” Michelle smiled.

I don’t know whether the First Couple has seen the movie yet. And if they have seen it, what did they think of it? It can be tricky to watch a portrayal of you by someone else. What did they think of showing the nation the President’s smoking habit? How did they react to Michelle's speech about having to work twice as hard to get ahead at the law firm since she was Black and a woman? I imagine their reaction to the film will be similar to my own experience of seeing my romance with Roger portrayed onstage last year in Black Ensemble Theatre's production of Jackie Taylor's “The BlackWhite Love Story.” Though it was surreal, to say the least, and certainly differed in some ways from our own lives, it captured the essence of what made our relationship so unbreakable, so enriching, so loving. “Southside With You” is also a labor of love, and like I said in my introduction to the film at the Music Box, it is an ode to those who believe in love. After a season of bombastic blockbusters, I can't imagine more welcome counterprogramming.