Roger's "Return" to Twitter: An Explanation from Chaz Ebert

On Monday, August 10th, fans of late film critic Roger Ebert were perplexed by some cryptic messages written on his Twitter feed, @ebertchicago. At first interpreted as a mere mistake, the messages eventually caused writers such as The Next Web's Natt Garun and Observer's John Bonazzo to speculate on whether the iconic writer had indeed come back from the dead.

Followed an hour later by:

When Twitter followers engaged with the voice, it would respond. Here are a few choice exchanges: 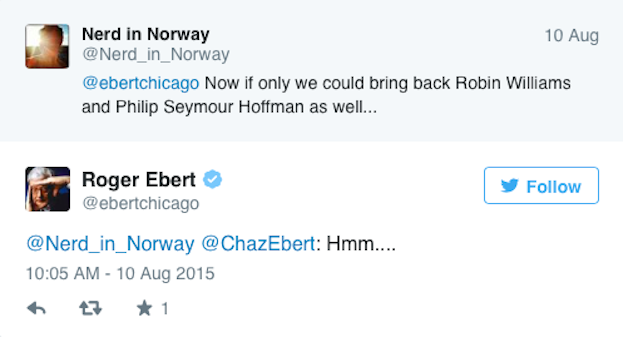 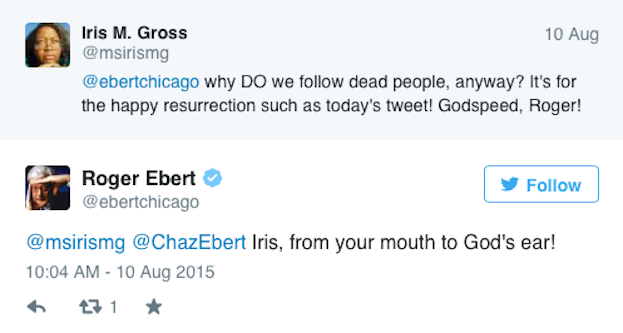 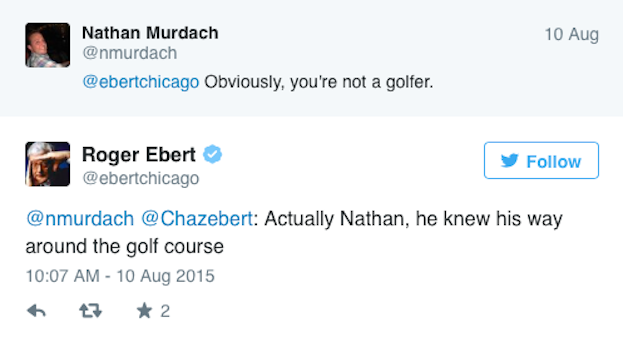 It turns out the voice belonged not to Roger's spirit nor a rogue hacker. Garun hit the nail on the head when she suggested that the initial tweet posted at 8:51am was the result of Roger's wife, Chaz Ebert, getting "a little annoyed by how much data the Twitter app gobbles up, especially if she’s left the option for GIF and video autoplays on." Chaz had meant to send the tweet as a direct message, but ended up posting it directly on Roger's account. Once the accidental tweet went viral, Chaz found herself faced with many questions from Roger's followers (currently numbering at an estimated 794,000), and she decided to answer some of them, thus resulting in the amusing banter posted above. Below, Chaz responds to three of her most-asked questions.

1. What was your initial reaction once you realized what had happened?

My phone started pinging incessantly shortly after I sent what I thought was a private message complaining that the Twitter app was using too much of the available data on my iPhone. When I checked, I realized that the reply button I clicked actually posted directly to the @ebertchicago Twitter account! The message was so cryptic people thought it could have been Roger from "The Beyond," so it was being retweeted over and over immediately. Of course I was initially horrified, especially after people started sending me messages saying they thought the account had been hacked. I have to commend Natt Garun from NextWeb for guessing correctly what had happened.

2. What inspired you to respond to the Twitter followers and was it your intention to respond in Roger's voice?

Roger was a pretty cool cucumber about things like this, and actually loved mixing it up in the tech and social media worlds, so he saw incidents like this as learning opportunities. I am trying to adopt that attitude about most f---ups in life. Roger would have reached out to his followers to let them know what was happening. He loved communicating with people. I am not as skilled as he was in a situation like this, but I decided to give it a go and start answering all of the comments individually. And by the way, I was not answering in Roger's voice. I was answering as me and so I included @ChazEbert before each response.

3. How would Roger have reacted to all this?

Roger would have had so much fun with it!  He loved his Twitter account and one of the last things he did before he passed away was give me his passwords and strict instructions not to cancel it. I marveled at his ability to bounce back from adversity. What most of us would have seen as awkward, Roger would see as just being human. He didn't go through life timidly and he wasn't afraid to make mistakes. He was also forgiving of other people's mistakes as well and encouraged them to acknowledge them and move on. In fact, as I was responding to the messages I could just picture him smiling and giving me the Thumbs Up!