On the Subject of Movies and Pies: Passion of the Crust

Far Flung Correspondent and chief baker Jana Monji started the subject about pie-making and asked others to chip in about movies where pies played an important role. Our Correspondent from Istanbul, Ali Arikan, suggested that she call her project "Passion of the Crust." Our Paris Correspondent, Lisa Nesselson, followed the thread by suggesting all the recipes should be in Aramaic, and soon they were off to the movies. Others jumped in and here is their conversation, which took place over several short emails…

Which pie movie or scene would you add?

I'm gearing up to see if I can bake 31 different pie recipes for March 2014 because it is 3/14 (that's a geek joke). So I was wondering if you all could think of movies where pies played an important role (outside of "American Pie").

This morning I baked a fresh blueberry pie (with a bit of orange flavoring because I'm from California) and a yogurt creme pie with a passionfruit pudding top layer. The last one is an experiment so I'll have to see what Ian says about it.

I will probably bake another tomato pie but didn't have enough cheese. I also have a nectarine-blueberry pie that needs to be made. I've decided I might need a pie fridge.

I also made banana-walnut muffins.

ALI ARIKAN: The late Adrienne Shelly's "Waitress" is all about pies. And there's "The Help," I suppose…

Please call this project "Passion of the Crust." 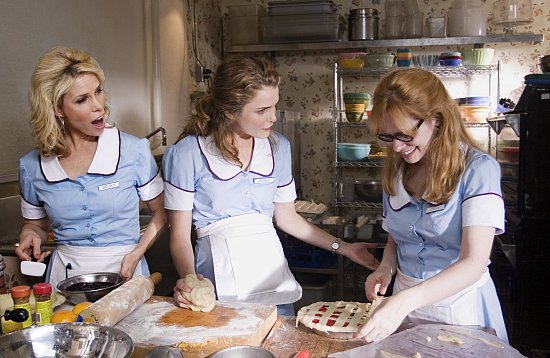 LISA NESSELSON: Call it Passion of the Crust? Yes!! With all recipes rendered in Aramaic. What's that you say? Pie in the sky? Depends on how you slice it.

A stray memory: I lived in San Francisco for the first 8 months of 1976 and one of my roommates belonged to something called The Pie Club. As I recall, each month one member drew the assignment of hitting another member with a pie. I was told that this created a delicious sense of heightened sensitivity to daily life. Is THIS the day? Will it happen at work? Will I be ambushed at the organic foods market or the incense shop or during yoga class? One member of The Pie Club was a man who, full grown, was very short -- barely 5 feet. The month he was due to be hit with a pie, his designated stalker filled a portable wading pool with custardy ingredients and instead of throwing a pie AT him, threw the short fellow INTO the pie. 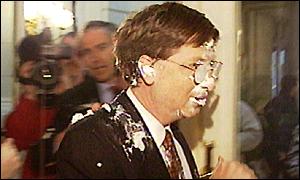 An iconoclastic Belgian filmmaker named Noel Godin has spent decades deflating public figures by smacking them with pies. Jean-Luc Godard, Bernard Henry Levy and Bill Gates (at Davos) are a few of his successful hits. Henry Jaglom made "Can She Bake a Cherry Pie?" which I know I saw, but I can't recall whether actual pies figure in the narrative. And, of course, Darren Aronofsky started out with a film named after 3.14…..

DONALD LIEBENSON: The Three Stooges: "In the Sweet Pie and Pie."

PETER SOBCZYNSKI: "The Great Race," "Sweeney Todd," "Battle of the Century," "Stand by Me," "I Drink Your Blood," "Thinner."

MATT ZOLLER SEITZ: I'm pretty sure that in "Saving Private Ryan," Mama Ryan gets the bad news after she puts a pie on her windowsill. Or maybe I'm just giving Spielberg too little credit?

ODIE HENDERSON: That "Bugsy Malone" clip reminded me how much I loved that movie as a kid, and also how much I've avoided it for the past 35 years because I'm scared I'll hate it now. I'm going to have to watch the whole thing sooner or later.

Everyone's already named the pie movies I had in my head… 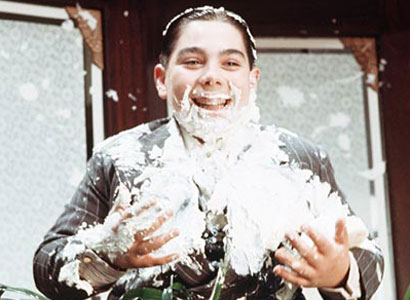