We're pleased to share some very exciting news for film criticism and diversity: Justin Chang has been hired by the Los Angeles Times. A critic for Variety since 2010, Chang will be starting his new position of film critic on April 25, working alongside another great of the industry, Kenneth Turan.

Chang became a senior film critic for Variety in 2010, and was promoted to chief film critic in 2013. A chair member of the National Society of Film Critics and a secretary of the Los Angeles Film Critics Association, Chang also authored the 2011 book “FilmCraft: Editing,” a collection of interviews with the world’s best film editors. 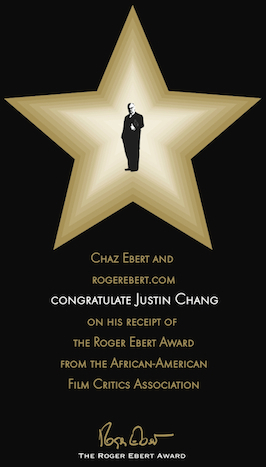 Aside from being one of the absolute best in the business (regarding his film reviews and puns on Twitter), Chang has been a leader in diversity in criticism. In 2014, the African American Film Critics Associations gave him the very first Roger Ebert award for diversity in film journalism, a distinction that has also been awarded to Susan King of the L.A. Times.

In 2015, Chang participated alongside RogerEbert.com's publisher Chaz Ebert, Editor-in-Chief Matt Zoller Seitz and contributor Rebecca Theodore-Vachon for a SXSW panel in 2015 titled: “The Future of Film Criticism: Diversify or Die.” A special recap of that event can be found here.

This past year, when “Creed” director Ryan Coogler received the Los Angeles Film Critics Association’s “New Generation Award,” he made a point to single out the efforts of Chang. After sharing his personal experience of first seeing “this guy [Chang] going crazy, typing on his laptop, and then he’d run off” at the 2009 Cannes Film Festival, Coogler offered his own advice on how criticism can best continue: