Roger's long-time book editor Donna Martin wrote a lovely recollection of working with Roger. I'm so touched that she is willing to share this with us. — Chaz

I had never even seen "Siskel & Ebert" on television when I knew I wanted to publish Roger's first book. John McMeel, president of Universal Press Syndicate/Andrews McMeel Publishing in Kansas City, had met Roger Ebert in the Chicago Sun-Times newsroom back when John was selling syndicated features to newspapers.

One day in 1983 Roger had handed John a stack of newspaper clippings of his interviews with film celebrities. John brought them back to me and they sat in a pile of material in my office for weeks as I tried to make room in my briefcase for my nightly reading. I was vice president and editorial director of the publishing company. In addition to editing, I oversaw every stage of production of the dozens of books we published each year (from contracts through proofs, jackets, bound books, and more). I never actually had time to read in the office.

The night I read Roger's columns, they struck me as among the best writing I'd read on anything. My note to John said they were like popcorn: once you started you couldn't stop.

To get rights to the book I had to call Roger's agent. He put me through one of the lengthiest negotiating sessions I had ever experienced. Finally, I got the book and Roger came on to the phone. "Here's looking at you, kid," he said in that warm Midwestern voice.

In one of the essays, a memorial to Ingrid Bergman, Roger had punctuated his tribute with lines from "As Time Goes By." Using the lines like this struck me as a way of organizing the chapters for the book. And so, each chapter led off with a line from this classic song from "Casablanca" and an introduction by Roger to the several interviews that followed. It seemed natural to me to call the book "A Kiss Is Still a Kiss", and Roger liked the idea.

When I presented the book at our sales meeting in New York, I explained that I didn't have a television set and had been sold on the writing alone. The sales reps were excited because "At the Movies" was already a hit on TV. "Get Donna a television set!" one of them yelled out.

The Chicago Sun-Times threw a big publication party in Chicago for Roger's book. It was the first time I met Roger. Afterwards, a dozen or so of us followed Roger to a Chinese restaurant. Sitting beside him I learned what a great raconteur he was.

We next met for dinner at Elaine's in New York. The legendary Elaine scrutinized all her guests. If you weren't a celebrity you were lucky to get a table. Elaine knew Roger and placed us prominently. Woody Allen walked by and greeted Roger and nodded at me.

"I have an idea for another book," Roger said immediately. "So do I," I replied. So we decided to do them both. It was the beginning of a publishing relationship that would see us through twenty books and a personal friendship that would be renewed in Chicago, New York, Kansas City, London, and Oxford over the course of thirty years. 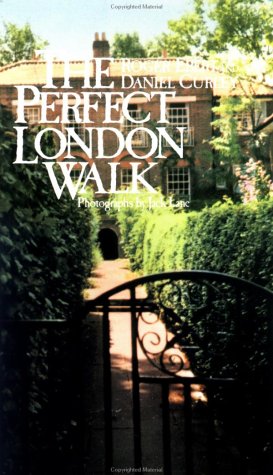 Roger's book was "The Perfect London Walk." The particular walk he described included a ramble on Hampstead Heath, a visit to the place where Orwell wrote "Keep the Aspidistra Flying," the cottage where Keats wrote and wooed Fanny Brawne, and Spaniard's Inn, which played a part in Dickens' Pickwick Papers. It ended in Highgate Cemetery, where Karl Marx, Radclyffe Hall, and other prominent figures are buried. As Roger described it, he was first led on the walk by Daniel Curley (whom he credits as coauthor), a professor of English he met on his first day as a freshman at University of Illinois and who remained a friend until Curley's death. In 1966, Curley, spending a year with his family in London, met Roger, who was on his way home after a year studying at the University of Cape Town, and took him on the walk. Roger, an Anglophile forever after, made a point of taking the walk annually for two decades.

When the book was finished in 1986, Roger was pleased. "Someday we'll take this walk together," he wrote to me. It didn't happen exactly that way.

The book I had proposed when we met at Elaine's was a compendium of his reviews of movies available on videocassette, which were just starting to come out at that time. We initially called it "Roger Ebert's Movie Home Companion: 400 Films on Cassette, 1980-85." The primitiveness of the video industry at the time is reflected on that first cover, with Roger standing behind a television set with rabbit ears. 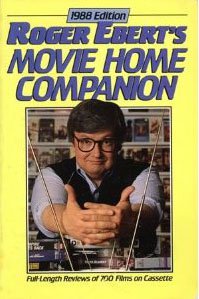 The book became an annual, growing by two to three hundred new reviews each year, while fewer than a hundred would be deleted. It became clear that all movie releases would eventually come out on video. As the book became more and more bulky, the cost went up and we had to add a dollar each year to the retail price. Nevertheless, in an analysis I did for Roger in 1990, the books had sold between 65,000 and 75,000 copies annually in the first five years.

By 1990 the Movie Home Companion was closing in on 800 three-column pages. Roger expressed gratitude and satisfaction that the book had evolved and "come of age." But I knew the growth was unsustainable in terms of cost. Roger was adding more than 200 reviews a year, while deleting a substantially smaller number. We didn't want to make the book simply a compendium of his four-star reviews because the "thumbs down" reviews were some of his funniest. In addition, he had added his interviews, the writing that had so enticed me at the beginning, an introduction that was highly informative of trends in the film industry, a variety of essays, and a comprehensive index of titles and stars. The additions amounted to well over a hundred pages. Still, it would be eight years before I could convince him to change the format, to a more manageable book renamed "Roger Ebert's Movie Yearbook."

In late 1995 I asked my company to change my title to editor-at-large so I could live or travel abroad part of each year. I was no longer Roger's primary book editor but remained permanently on the list of editors who received all of Roger's reviews and other newspaper releases. Even throughout his illness his writing was as trenchant and vigorous as ever.

Email communications never abated between Roger and me. Sometimes I challenged things he said in his blog, sometimes our exchanges were brief and wry. In print he remained the Roger Ebert I had known for thirty years. But the last memorable communication from him came in late December 2012. It was a screen shot of a Facebook posting from the Amazon website — all Internet resources that didn't exist when we started working together. It showed the cover of "Roger Ebert's Movie Yearbook 2013: 25th Anniversary Edition." It said, "Roger Ebert is the gold standard for movie critics and his Movie Yearbook has been the go-to source for movie lovers for more than 25 years." Roger wrote, "And the years race by…like a precious few…"

On April 2, news of Roger's blog called "A Leave of Presence" filled newspapers and airwaves as Roger revealed that his cancer had returned and that he would need to cut back on his activity. Amid what appeared to be ambitious plans for the future, he ran the cover picture from "A Kiss Is Still a Kiss," mentioning me as an old friend who had published his first venture into books. Only two days later, I heard the news of his death while I was driving. Tears clouded my eyes as I turned back toward home.

Years after we met, I told Roger I thought he'd filled a gap I'd felt with the loss of a colleague. "Nobody replaces anybody else," said Roger. "We just go through life hoping to find kindred spirits."

Here's looking at you, kid.