Few sets of films fascinated Roger like the “Star Wars” franchise. From 1977 to 2005, he was always captivated by the visual experience offered by the films, giving only one installment of the six less than 3 1/2 stars. With the soon-approaching release of the latest installment, “Solo: A Star Wars Story,” we are pleased to collect Roger’s writings on the six films in the franchise, which captivated him in regular releases and re-releases. For the filmography's chronological sake, the reviews are listed in order that the films originally came out.

In 1977, Roger reviewed "Star Wars," describing the four-star film as an out-of-body experience. He added, "The movie works so well for several reasons, and they don't all have to do with the spectacular special effects ... ["Star Wars"] relies on the strength of pure narrative, in the most basic storytelling form known to man, the Journey."

On June 28, 1999, Roger returned to the film for an entry in his Great Movies collection, deeming it a masterpiece equal to other "technical watershed" movies like "Birth of a Nation" and "Citizen Kane."

For that film's sequel "The Empire Strikes Back," Roger reviewed the film for its special edition re-release, published on February 21, 1997. He gave the "best of the three 'Star Wars' films" four stars, citing that it's a "visual extravaganza" that creates in us "a sense of wonder."

On May 25, 1983, Roger gave four stars to "Star Wars: Episode VI: Return of the Jedi" in his original review, calling it a "feast for the eyes and a delight for the fancy." He added, "It's a little amazing how Lucas and his associates keep topping themselves."

In a March 14, 1997 review for that film's special edition re-release, Roger wrote about how "Return of the Jedi" is "a riot of character intervention," while speculating about what will be the subject of the next trilogy. 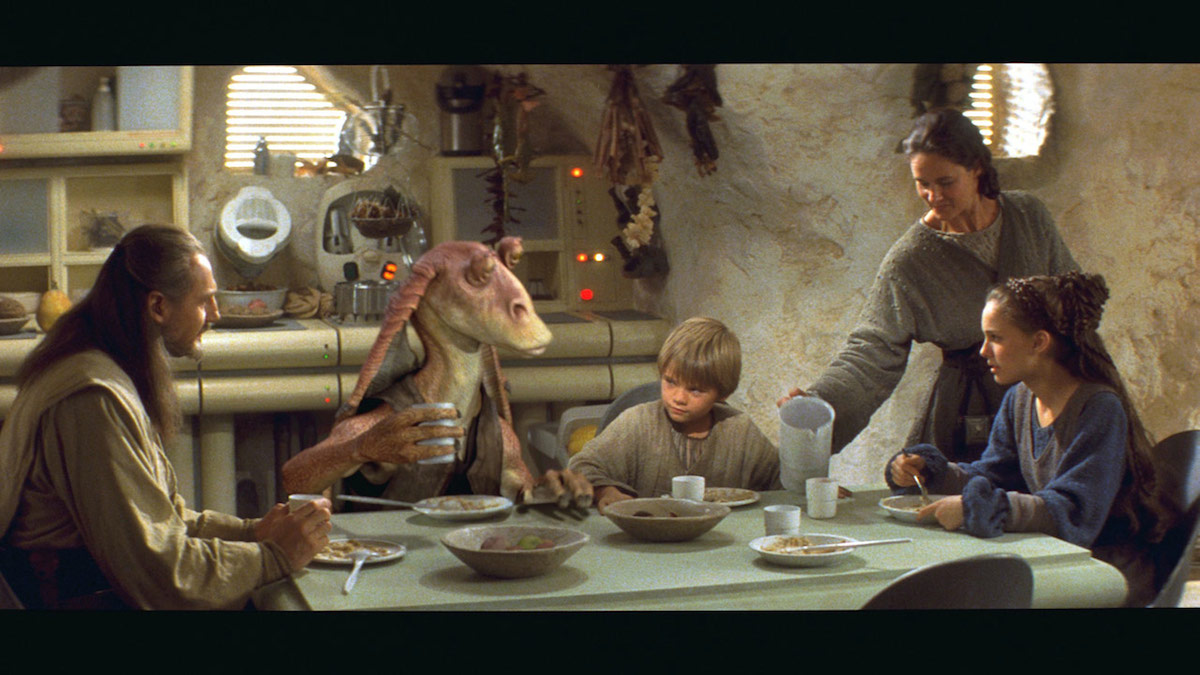 The prequel trilogy, which started in 1999, inspired a curiosity within Roger about digital filmmaking, especially as Lucas was incorporating special effects and projection technology that, at the time, was an uncommon experience.

In November 1998, Roger covered the highly-anticipated release of the trailer for "Star Wars: Episode I - The Phantom Menace," sharing a few details about what was included in the 130-second preview.

On May 17, 1999, Roger gave 3 1/2 stars to "Star Wars: Episode I - The Phantom Menace," stating that it was an "astonishing achievement in imaginative filmmaking."

Such filmmaking fascinated Roger, an enthusiasm he shared with George Lucas when he interviewed the director for a piece titled "George Lucas is a Techie at Heart."

Around the same time, Roger also reflected upon the importance of great imaginative visuals from films like "The Phantom Menace" in the piece "Full Force is Behind Effects, Not the Story." He talks about how Jar Jar Binks intrigued him as a character and composite, while reflecting upon what "Phantom Menace" missed.

Three years later, on May 10, 2002, Roger published his two-star review of "Star Wars: Episode II - Attack of the Clones," calling it a "technological exercise that lacks juice and delight."

Feeling that he had missed something visually from a film projection of "Attack of the Clones," Roger went back a few days later and saw it on the up-and-coming format of digital, stating the images were now "sharper, crisper, brighter and punchier on digital." He wrote about the experience in a piece titled "Lucas Demonstrates Potential of Digital Video with 'Attack of the Clones.'"

On May 19, 2005, Roger reviewed the final installment of the prequel trilogy, "Star Wars: Episode III - Revenge of the Sith," giving it 3 1/2 stars. He spoke about how the film teaches a lesson about CGI, stating: "The lesson, I think, is that special effects should be judged not by their complexity but by the degree that they stimulate the imagination." With this in mind, he bookends the review with a note about how "Revenge of the Sith" would reportedly not be the last feature in the franchise. "There will be enormous pressure for them to be made, if not by him, then by his deputies."