Alone in the ring at Cannes 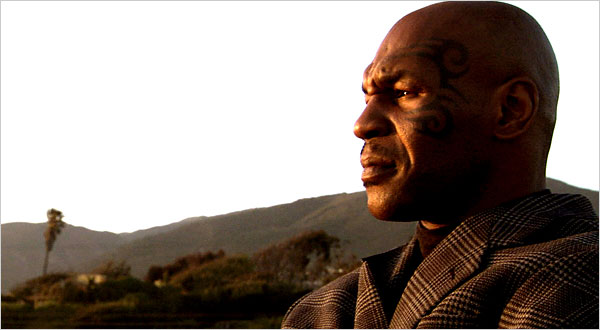 CANNES, France -- Roger, when we talked about sending you messages from the film festival I never expected that my first would be about a heavyweight boxer. Mike Tyson's grip was surprisingly gentle when he shook my hand, and his voice soft and polite on stage, but there was nothing gentle, soft or polite about the images onscreen here in "Tyson," James Toback's documentary about his life. It is a compelling character study. His life is a tragedy of Shakespearean proportions.

The film is fascinating because Tyson recalls and analyzes his life from childhood in Brooklyn to the present in his own words. He describes his poverty-stricken neighborhood, a lack of adult role models, and the constant companion of fear until he learned how to fight. He freely confesses to being a thug and a thief and to using drugs before Cus D'Amato entered his life and taught him "discipline and character," and when Cus dies, he admits to being bereft and aimless. Other than winning boxing matches, he had no idea how to conduct his life.

Toback sits him in front of the camera and lets it roll, or at least he gives the impression of letting it roll. You wonder how much of it is edited, but Tyson comes across as articulate and reflective. He is mainly calm and thoughtful as he dissects aspects of his life and career. He even expresses remorse for some of it, but not in the case of Desiree Washington, for which he spent three years behind bars for a rape conviction he denies. "I was abusive to some women, but not to her," he claims in the film.

"Tyson" is also fascinating for the history shown in the footage from Tyson's first knockout to his crushing defeat at the hands of Buster Douglas. One scene shows Muhammad Ali whispering to Tyson to get revenge on Trevor Berbick for defeating Ali. And of course there's footage of the infamous ear-biting incident with Evander Holyfield. Interspersed with the boxing footage is his take on his relationships with women, including that train wreck of an interview by Barbara Walters of Tyson with Robin Givens.

The film is an unflinching look at brutal prizefights and out-of-control press conferences where Tyson was full of rage. When asked why he allowed Toback such unfettered access to him, he replies, "I was in rehab and was on my way to an AA meeting when Toback called and said he wanted to make this movie about my life. I didn't have anything else to do. I wasn't going anywhere." He said he had known Toback for 20 years and trusted him, but had no idea the film would be so personal. Tyson says it made him feel "vulnerable."

Can a person be trusted to fully analyze the lessons of his own life? Or does that take some interpretation by others? At the press conference following the Cannes screening, Toback said there was enough out there that others had said about Mike, and this was a chance in a lifetime to really "see into Mike" by allowing him to talk about himself. "Who gives a f**** what Teddy Atlas or anyone else has to say about Mike Tyson! There are a lot of other boxers out there, but Mike was a good subject for film because he has a mystique. Norman Mailer, Orson Welles, Michael Jordan and Muhammad Ali also had it. But Tyson is more significant because of his combination of speed, accuracy, craft, and power. Even more so than Ali."

The film is shot on digital video; Toback uses too much split-screen for my taste. But you don't watch this movie for the aesthetics. Some of Toback's films seem to be more about Toback than anything else, but they also offer a glimpse of redemption. You can see why the arc of Tyson's life interested Toback. Some of the boxer's life mirrors the director's his own excesses, his fall from grace, and his redemption in sobriety.

So what are we left with at the end of the film? Tyson says, not very helpfully, "Yesterday is history and tomorrow is a mystery." We're left wondering who and what Tyson is today. When he walked into the theater here last night, he looked puzzled to even be here. Today I asked him how he would write the rest of the script of his life if he had that power. He said the answer to that is more complicated than he could give.