Oh, Bollywood! It's bigger than ever 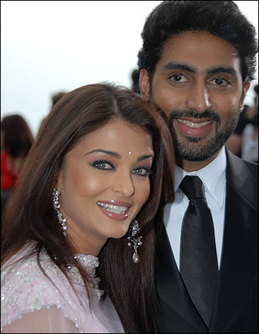 Above: The royal couple of Bollywood, Abhishek and Aishwarya Rai Bachchan.

Before attending the many scheduled events sponsored by the Bollywood fraternity, I began my day watching "A Proper Violence." The story of a husband and brother-in-law plotting to kill their wife and sister's rapist. I must say watching the film was like being on an emotional roller coaster, as you navigated through the suspenseful plot. I spoke with the director Chris Faulisi from Albany County, NY, who was just an intern at Cannes last year. It looks like Cannes opens up a lot of doors for youngsters who are interested in pursuing a career in cinema. I absolutely love it!

Soon after I returned to my hotel and rummaged through my collection of evening wear to find the perfect "look" for my Bollywood night. It's funny how everything looks so dazzling on the rack, and so blah on the person. With much difficulty I pieced together what I hope will suit my fancy surroundings: the party for the upcoming Bollywood feature film "Raavan" at the Carlton Hotel. 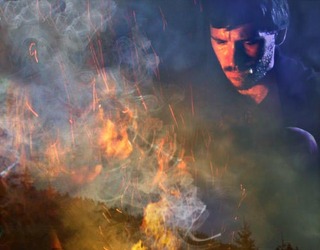 At the party, a who's who of the South Asian entertainment scene watched a trailer for "Ravaan." Afterward, industry folks mingled and rendered their judgments on the fate of the film, based on the two-minute trailer! I wonder why they are wasting their talent on showbiz. They should have gone into astrology instead! The social hour was interrupted as the stars of the film, also known as the royal couple of Bollywood, Abhishek and Aishwarya Rai Bachchan, entered the event. 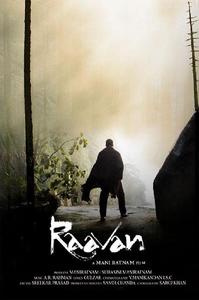 Aishwariya looked stunning in her contemporary sari and Abhishek looked quite charming as well. The couple spoke to the crowd about their thoughts on this film. Afterwards they greeted those in attendance and exited the event with their industry fellows.

A film producer who I know quite well grabbed me so I could be introduced to Subhash Ghai. I nervously walked over hoping he wouldn't recall last night's near-collision. I was floored by his humble nature. Needless to say, he didn't mention the previous evening... and I'm not sure if I am relived or a little disappointed. 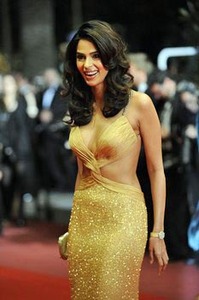 Nevertheless it was lovely to see such a renowned man who is so down-to-earth. Mr. Ghai and his entourage asked me to join them as they walked over to the Indian pavilion to attend Bollywood starlet Mallika Sherawat's event to promote her Hollywood film, "Love Barack" ("Politics of Love"). I happily joined them, told them more about my background and received advice from them about my career.

The rest of the guests from the previous party also gathered at the Indian pavilion, which was now absolutely packed. My party purse was soon filled with business cards since festival goers use Cannes as an opportunity to fill their Rolodexes. The networking continued as I was asked by my new-found friends (aka, people I just met at the party) to have dinner with them. 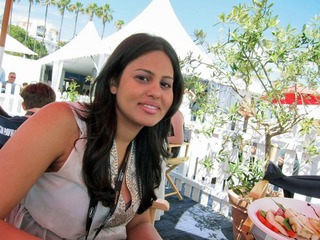 Anita Chatterjee, on location in Cannes. (Photo by Roger Ebert)

We visited a fancy French restaurant where dissecting the menu was a nervewracking task, I listened as they talked business, discussing the state of the film industry in India. It's funny how they speak in third person while pointing out faults, and in first person when gloating over accomplishments. (Human Nature 101 lesson for the evening.)

The rest of the night I party-hopped and continued to meet people who were definitely eager to expand their networks. (Mental note: bring a bigger purse next time.) At the end of the night I was absolutely exhausted, but I had a fabulous time embracing the world of Bollywood today.

• Note: An incorrect YouTube clip for the "Ravaan" trailer was mistakenly posted earlier by an editor. It was not seen or approved by Anita. We regret the error. Below is the correct trailer. RE •