Mixing and mingling on land and sea 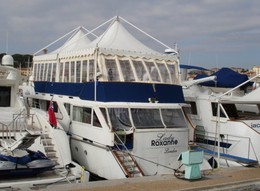 The serenity of crystal clear blue water and majestic purple mountains serves as backdrop to the hustle and bustle of all activity at the American Pavilion in Cannes. I had the pleasure of enjoying the panoramic view of the Cote d'Azur, honored to be in the company of Roger and Chaz Ebert, as well as their dear friends, Uma and Gerson De Cunha. Being in such esteemed company and immersed in the energy of what for the next few days would be the equivalent of the nucleus of the American film industry, was enough to give me goose bumps. However, the warmth of our conversation and the positive vibe all around made me feel right at home.

For the duration of the festival, the American Pavilion provided both a dynamic business environment and an opportunity to relax in comfortable surroundings. Perhaps representing what I sensed was the overall feeling of the festival, a mix of business and pleasure. I watched as people reunited with colleagues they had not seen since the last festival, the look of joy on their faces made me feel like I was in the middle of a family reunion. The atmosphere made one think about the term fraternity, when we refer to the entertainment industry.

After lunch I took in a few screenings. Now that I have been here for a few days it is much easier to find my way around and figure out where I want to be. It is a little bit like being a freshman in high school who has finally found the shortest route to her locker!

As the evening set in I headed to my very first yacht party hosted by Benaroya Productions in honor of their new film "The Romantics." I hoped to be able to enjoy being by the Riviera in a relaxed atmosphere. My hopes of a leisurely evening were dashed as I entered the yacht that was filled to its capacity. With barely enough room to glide through the deck I made my way to the railing to catch some fresh air. Unfortunately the breath of fresh air felt more like a burst of cold air. Perhaps my choice of a short black dress added to my chilling experience. However, like most events at Cannes during the festival, it was a chance for most attendees was a chance to expand their networks.

The evening was filled with introductions and inquisitions about who I am and what I do. As I sat down on what seemed like the last spot on an overstuffed couch I was introduced to Shalene Portman. Shalene is a first-time director and her film, "The Significant Other," is an official market selection at the festival. She expressed her gratitude to the 'Marché du Film,' as it also recognizes the importance of movies as an economic enterprise. 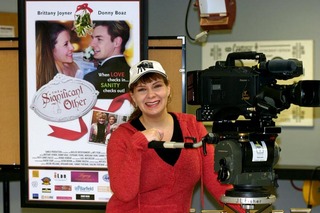 During our conversation she revealed to me that what drew her to me was my squeaky voice, as I tried to determine whether I has just been given a compliment or insulted, she explained that she was currently casting for a television show and my high pitch young voice turned out to fit a character she is casting for. We exchanged information and I was delighted that my voice that I have cursed for years actually brought some good fortune. While it remains to be seen how things will turn out with her offer, the realization that I would have never known about it had I not been a part of the festival made me grateful for the umpteenth time since I landed.

After the night on the yacht ended I headed over to the outside lounge area of the Grand hotel. This swanky space consists of edgy white coaches on the front lawn. On closer inspection I determined that this state-of-the-art furniture was inflatable and quite similar to the $15 blow-up coach that once graced my dorm room. The spot itself was another 'after hours' networking spot where festival goers would meet to talk business in a casual setting.

I do get annoyed with the business side of things as I am not a business woman, however I do understand the importance of the festival supporting both the cultural and the economic side of films. Well, another 4:00AM ending to an eventful night. Till next time, "Bonne nuit et faites beaux rêves."