An unforgettable night for Udaan 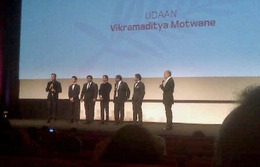 Glitz and glamour are in the air when night falls at the Cannes Film Festival. The streets are jammed with tuxedo clad men and women trying to make the red carpet shine with their ravishing and glowing outfits. This was my last night in Cannes and I was hell-bent on making the most of it.

I definitely felt the glitzy vibe as I walked to the premiere of the only Indian film in competition, "Udaan." The scene was straight out of E!, with glittering lights shining bright enough to make every corner of the south of France sparkle. Certainly a fitting end to my last night at the festival.

Above: The "Udaan" team on stage. (Photo by Anita Chatterjee)

I met up with the cast of "Udaan" at the Indian Pavilion as they were taking photographs before the event, celebrating the first time in seven years that an Indian film has been in competition. I joined the the cast on the walk to the red carpet, and an entourage of Indian reporters and fans were waiting outside. It was exciting to see how the actors made these festivalgoers' day just by taking photographs with them. For a fan it is a chance to be with a personality who is larger than life, and for the actor, it's a confirmation that they are doing their job well. As someone of Indian descent, I was pleased to see Indian actors grace the red carpet. It was a treat to see female members of the cast donning elegant saris ( Indian outfit for woman) that dazzled in the lights as their images were displayed on a giant screen. 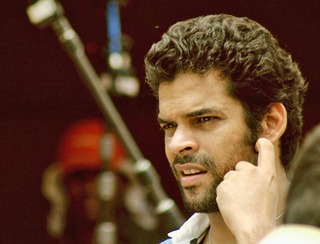 I took a seat in the theater. The MC came out and began calling up cast members one by one, while speaking in French. The room was full of energy as the crowd cheered each actor as they reached the stage. Before the film began, director Vikramaditya Motwane spoke briefly about this being the first time the film was being shown to more than fifty people and his eagerness to see the viewers' reactions.

When films are screened for competition in languages besides English or French, captions are used in both languages. I must say that I was glad that I understood Hindi because the English subtitles which appeared below the French were difficult to read. I was a bit annoyed but I guess in this case there was no other way to do it and they tried their best to reach out to the diverse audience. 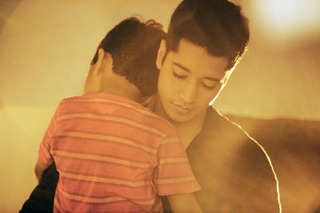 I thoroughly enjoyed the film and with the rest of the audience I felt the need to take part in the standing ovation. The emotion of the "Udaan" team as they received the deserved recognition was palpable.

This ends my trip to Cannes; I am a bit saddened by the fact that I am leaving the glittering streets of the Riviera. I will miss watching the crowds traipsing up and down the Croisette in search of excitement. My routine of shuffling from one event to the next, starting at the Carlton, then to the Palais, then to the Miramar, then back to the Majestic Bar, etc.... This is an exhausting process and as the sun gets hotter you become increasingly worn out. However, in your exhaustion you find a sort of invigoration as well. My first trip is one that I will hold onto for a long time to come, and I end with the resolution to come back next year. Au revoir Cannes!