Jay Leno and I go way back. One of my fondest memories is of Jay chasing me around the parking lot of the Hotel Bel-Air in Los Angeles. I always tell people that I thought of the Bel-Air, which I could still afford in those days (long long ago), as more a sanitarium than a hotel. You know how in L.A. your waiter has probably written a screenplay or two? At the Bel-Air, one of the parking attendants had actually starred in an ABC network series several years earlier! He played a wolf-boy.

But back to Jay. This was a few years before he took command of "The Tonight Show." My rental car had been brought around and I was about to get in when, from the car behind, I heard a familiar squeaky voice: "Hey, Tom! Wait a minute!" It was Jay Leno, alighting from one of the cars in his 500-car collection. Or 5,000, whatever. And for some reason, I kind of recoiled, or looked more nervous than usual, because he said, "Don't be afraid! I'm not mad at you!"

And yet as he came toward me from his car, he looked so gigantic, I made a bumbling attempt to get into mine, like I was escaping with his wristwatch or something. I guess I'd written something negative about a network special Jay had done and he thought I thought he'd be mad. Whatever, the Nicest Guy in Show Business (or so it had seemed back then) took pains to say he didn't consider it personal and wasn't upset.

He shouldn't have been, because for years I had written raves about Jay and interviewed him repeatedly when he came to Washington for comedy-club appearances. He always had modest, single-room hotel accommodations and his overnight bag would be spilled out on a chair or bed. He was or presented himself as a man of the people, the Johnny Appleseed of Comedy, a tremendously affable and infallibly funny pro who never ever tired of touring. But that was then.

I wrote so positively of him that his then-agent, the notorious and since deceased Helen Kushnick, told me I had helped Jay land the "Tonight Show" gig. Really?!? Of course, it may just have been a form of flattery. Kushnick was portrayed as a meddlesome monster in "The Late Shift," based on Billy Carter's book about the bloody battle to succeed Johnny Carson as host of "Tonight." For the record, I don't think anybody ever really did succeed him. Or ever will.

Whether I helped Jay or not, I was and am a devoted fan of David Letterman, who had brought such irreverent inventiveness to not just late-night TV but really the whole medium of television, tipping over once-sacred cows faster than they could be propped up again. He was full of mischief, which reminded me at the time of my original late-night hero, Jack Paar, courter of controversy. Although Paar became a Letterman fan, they really had little in common except pricey homes in suburban Connecticut and a Midwestern background.

In an act of kindness and respect that struck me as extremely uncommon in show business, or anywhere, Dave invited Jack and his wife Miriam (they died within a few years of each other, Jack in 2004) to lunch at the 21 Club in Manhattan; he even sent a limo to fetch them. Miriam went off shopping. I got to sit in at lunch. It was great; I didn't have to say a word the entire time.

Dave subsequently made it clear that he and I were not friends. Well of course not, and tempting though it may be, critics should never try to be friends with the people they write about. But that lunch, that gesture, couldn't help but deepen my regard for him -- not because I was there, but because he took the trouble to make Jack feel remembered. Dave, Jack and Johnny all had in common that they were born to broadcast. As Ted Koppel once said of Sam Donaldson, "If there had been no television, he would have gone door-to-door." It was said with affection.

So anyway, Jay got off to a terrible start on "Tonight," and we may never know if he was or wasn't aware that Kushnick had planted a nasty story about Carson in the New York Post, quoting NBC executives as saying Johnny and his audience had grown too old and that they were anxious for him to leave.

Now, of course, there is a sense of irony and déjà vu as Jay does battle with today's NBC executives -- a feckless bunch of stiffs from the corporate cable world -- and Carter is back on the late-night beat yet again, reporting that NBC executives think Jay and HIS audience are now too old and suggesting it's time for HIM to go! -- and for ambitious, money-mad and young Jimmy Fallon to move from 12:35 a.m. to 11:35 p.m. and host "Tonight." Fallon has done nothing to shoot down the rumors, but then he's busy pimping for a credit card company and his own production outfit.

What went around having thus come around, I now feel a real empathy with Leno and a residual affection, too. He is a great comedian. When he was in his element, at the comedy clubs, he was masterful, wonderful, indomitable. I saw him match wits with a heckler once at Caroline's in New York. Of course, the heckler's wit was no match for Jay's, but Jay put the guy down and retook command of the audience in a gentle, non-abusive way. He really wouldn't rest until he'd won the heckler over, just as he had to win over everybody in the club or die trying. Such is the curse and the joy of being one of society's professional jesters, as opposed to a mere buffoon like, say, a couple of presidents I could mention. 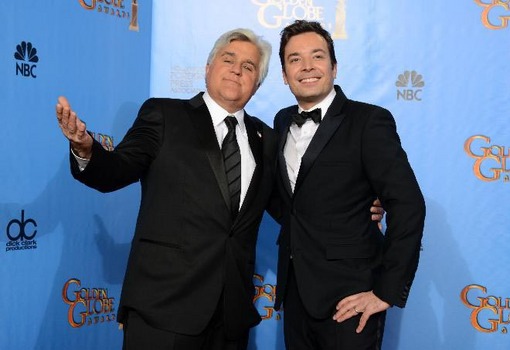 Leno is reportedly angering NBC executives by making jokes about them on the air. Good God, this is supposed to be new? I'll never forget Carson including in one of his monologues, just after a faltering NBC had put merciful ends to a flock of its lamest prime-time shows, that NBC stood for "Nine Bombs Canceled." Considering the fact that in a recent week "Saturday Night Live" was the highest-rated nighttime show on NBC -- not the highest-rated late-night show, the highest-rated NBC show, period -- those executives ought to shut up and get to work, not whimper over a comedian's jibes. (Dave has been generous at ridiculing network executives, too, and why not? It is precisely what they deserve).

The other night Leno noted that science might soon make possible the "Jurassic Park" trick of bringing back extinct species -- and that this should give hope to NBC. That same night, for the record, Letterman, Leno and Fallon all did jokes about the guy who made a car run on coffee by saying that if we thought it cost a lot to operate cars now, wait 'til Starbucks got into the act. Oh yeah, we really need four or five of these shows in late-night to do variations on a single joke. No wonder some of us have retreated to "Perry Mason" on ME-TV or "Alfred Hitchcock Presents" on Antenna TV. Or the relatively safe haven of our own dreams.

Jay's contract runs through 2014; it'll be interesting to see if tiny-minded NBC executives employ psychological warfare in attempting to force him out earlier, or if Fallon's camp will be issuing ultimatums , as Leno's once did, threatening to go to Fox unless early guarantees are made. Of course, Fallon probably already has the "Tonight Show" guaranteed him once Leno leaves, but it's when Leno leaves that is up in the air, no matter what it may say on paper.

Leno still can make me laugh in a snap. But something changed when he took over the "Tonight Show." It seemed as if getting the show was more important to Leno than doing the show; it was like a trophy for his mantel, but he didn't really want to cuddle with it under the covers. He still lights up infectiously when a joke works, but his writers often let him down (then again, he is one of them), and too many of the pre-taped bits ("Jay-Walking") fall flat.

The other night Leno did a bit from the studio audience that supposedly spoofed such talent-show competitions as "American Idol" but was really an embarrassingly blatant rip-off of Letterman's "Stupid Human Tricks." Even Jay's congratulatory "Nice job," which he says to rock groups no matter how lousy their performance may have been, is a duplicate of what Letterman has always said to musicians and comics who perform on his show. Actually, the "guests" who just "talk" with Letterman are of course performing, too; Letterman even sometimes says a demeaning "nice job" to them. He won't let us cling to ANY of TV's little illusions, which is good but only up to a point.

By the time Letterman sees them, most of his guests have been "pre-interviewed" by producers and virtually rehearsed to death, but this is common to all the major talk shows -- and in spite of it, many of them still sparkle spontaneously with Letterman as they do on no other show, partly because he will ignore the notes and go off on some mad tangent of his own. As for his being uncompromising, he once responded to the litany of rave reviews I had lavished on him in the '80s and '90s by calling me "sycophantic" to interviewer Lloyd Grove. Pressured by his executive producer, he did call to apologize (oh, I had clout in those days) and had me helpless with laughter by the end of the very brief conversation.

When I said I certainly didn't want to be considered a "whore" for the Letterman show, he said I was over-reaching.

I don't judge talk-show hosts, or anybody, by how they react to reviews from me or anybody else, I hope, but Conan O'Brien, who got the lousiest deal of any talk-show host ever (from NBC, of course) and is now tucked away on one of the Turner cable stations, not only forgave me for some very negative things I wrote when he started out but quoted a few of them in one of his celebrated hilarious commencement speeches (practically a second career for him). I thought that showed tremendous -- uhhhh -- self-loathing? No, no, it showed how very grounded and self-effacing he was.

He has more pure integrity than any of the other boys, and maybe that's why he ended up with "the fuzzy end of the lollipop," as Marilyn Monroe says in "Some Like It Hot." But we needn't despair for Conan; he is reputedly making a fortune. He is undaunted and uncomplaining, two things no one has ever accused me of being. Send in your daunts, I cave. And complaining is, arguably, my life's work.

Sorry to have gone on so long with this, but then the late-night story keeps going on, too. Maybe Billy Carter is even planning to do another book -- heaven help us. Conan is the guy who ought to get the last word. At what I think was his most recent commencement address, to graduating students at Dartmouth in 2011, he quoted himself -- the last words he said on NBC before the "Tonight Show" was gracelessly yanked out from under him by executive goons and given back to Leno. Choosing to be grateful for the good things rather than bemoaning the bad, O'Brien told the students, "Work hard, be kind, and amazing things will happen." God bless him.