Obama vs. Romney and Punxsutawney Phil

Network commentators and reporters fell all over each other in declaring Mitt Romney the winner of the first presidential debate Wednesday night, but maybe Romney didn't so much win as Barack Obama surrendered. Obama all but handed it to Romney by mistaking "presidential" behavior for half-hearted diffidence. He acted over-confident when all indications are he has no reason to be over-confident.

Of course it is unfair that Obama had to debate two men, Romney and the co-called moderator for the so-called debate, Jim Lehrer of public TV, who emerges from the shadows sort of like Punxsutawney Phil, the famous groundhog. Lehrer appears every four years, not every year, but even every four years may be too often. Lehrer wasted so much time warning the combatants about time constraints that he was an irritant, not a facilitator.

For some reason, football games can run over 30 minutes or an hour on TV with no complaints but a presidential debate absolutely must, must get off on time. Lehrer kept trying to impose a suffocating format on the proceedings when he should encourage just the opposite, a wide-ranging exchange of ideas not hampered with idiotic formalities.

Worse, Lehrer let a hyper-aggressive Romney walk all over him and in fact usurp the job of moderator, dictating at various points what the topic should be and asserting himself so forcefully as to come across as an arrogant bully, the very image you'd think he'd be trying to deflate. He did score points, though, whereas Obama sometimes seemed dithery and fog-bound and much too concerned with minutiae and details too arcane for typical viewer-voters to follow. 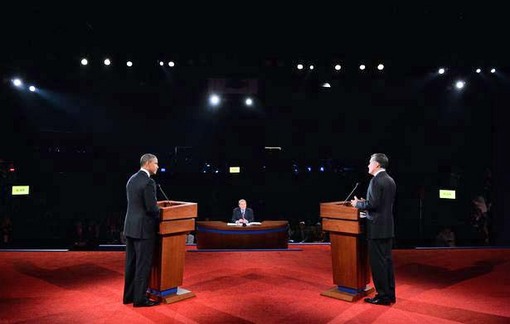 He might as well have brought up Quemoy and Matsu, the Chinese islands that seemed so important in presidential debates of half-a-century ago. Many of his answers presupposed a depth of detail justifiably beyond the average voter the kind of thing that Washington wonks obsess over. For someone who talks so much (and sometimes, it seems, condescendingly) about "folks," whether "folks" like his grandmother or folks like you and me, Obama lost his grasp on the common touch several times during the debate.

Obama even made the ridiculous mistake of referring to rich people as "folks like me and him," the "him" being Romney. He was putting himself in the same category with his opponent! What's wrong with using a direct term like "the rich" now and then?

The president likes to talk in innocuous generalities about "priorities" and "choices" rather than saying that his opponents' policies might simply be wrong-headed, or corrupt, or dangerous. Again, though, Obama had to defend himself not only against Romney's big assault but against Lehrer's bumbling and seeming favoritism. The moderator was more inclined to interrupt the President than to dare interrupting Romney, whether Romney was running amok or not. At various points, Lehrer simply surrendered control of the debate to Romney, who was allowed to dictate what topics were discussed and when.

Lehrer played welcome mat, lying down and letting Romney stomp all over him. He was the kid in the schoolyard whose lollipop had been stolen by the class jock.

What surprised reporters who commented afterwards on the networks was Obama's seeming lethargy when it came to attacking Romney on his and the Republican Party's apparent vulnerabilities. It's as if there are two Obama campaigns running concurrently, the aggressive one of the mostly effective TV commercials, and the nicey-nicey polite one that Obama embodied at the debate. It was a big mistake. Obama "seemed to lose his train of thought" at various points, said NBC's Chuck Todd after the debate, and Jake Tapper of ABC News noted that "performance-wise," it had been "a strong night for Gov. Romney."

ABC has the best group of reporters, experts and pundits to trot out on occasions like this (though otherwise-expert anchor Diane "Bubbles" Sawyer overdoes the "isn't-this-fun" at times) and CBS News, led by school-marmish anchor Scott Pelley, has the dullest.

Pre-debate coverage on all the networks had dwelled on the scripted nature of the events and the inevitability of fabricated "zingers" designed to be remembered by the viewing audience, with Lloyd Bentsen's famous rejoiner to Dan Quayle -- "you're no Jack Kennedy" -- and Ronald Reagan's "there you go again" cited as key examples. But there seemed to be only one of those last night, and it was fairly lame -- Romney telling Obama, "You have your own plane" and "your own house," but not "your own facts" when discussing the issues.

This fake ad-lib stuck out like a sore fist. Nobody paid much attention to it, and Romney plowed on. Obama even let Romney get away with the preposterous fiction that the federal government is bad, state governments are good. Yeah, right -- like during the civil rights revolution of the '60s, maybe? Goodness knows corruption is unheard of in state governments throughout the nation, right?

Romney won by not losing. Obama lost by not winning. Romney did not need to act "presidential," and didn't try; he needed to score points, and he did it without caring, it would appear, how crudely or even rudely he did it. Obama was more a hit-and-run victim than a whip-smart opponent, perhaps having made just too many speeches lately and having traveled too tirelessly on behalf of himself. He is only human, after all; maybe he needs to have some flunky like Caesar had traveling within earshot and repeating to him that "thou art mortal." Not just mortal, but defeatable in November.

For the record, Romney wore a red necktie, as in "red" states, and Obama wore blue. Both had flag pins in their lapels, but Romney's was bigger. By design, perhaps? We can't rule anything out when politics and television get together -- and they are never really far apart.

Anyway, the next debate, between the two vice presidential candidates -- both who've definitely had their hot-headed moments in the past -- ought to be more compelling than the first presidential encounter. It's too bad there is apparently some Constitutional amendment stipulating that Lehrer moderate these things. Better to bring Larry King out of retirement. In fact, when it comes to quizzing political candidates, David Letterman asks better questions than Lehrer does, so maybe he should get a shot.

Soon after the debate ended, the Obama campaign sent this email, signed by the president, to supporters: "I hope I made you proud out there explaining the vision we share for this country." Then Obama asked for a campaign donation. Bad timing, Mr. President!