You Just Might Find: The Midseason Finale of "Mad Men"

There’s a moment near the end of "The Strategy," the sixth episode of Mad Men’s seventh season, where Peggy Olson muses, "What the hell do I know about being a mom?" followed immediately with, "I just turned 30, Don." After a moment, he replies, "Shit. When?" The moment transfixes because it doesn’t play with everything the audience has come to understand about Don Draper in the seven years we’ve spent with him. Don Draper doesn’t care when he doesn’t remember birthdays. He has a woman for that. Don Draper doesn’t have friends for whom missed birthdays would be a concern. He’s bigger than that. If this is truly Don Draper, this man we barely recognize, then the question remains, as it always has since the series began:

Who is Don Draper?

The answer, as "Mad Men" concludes the front half of its final season, is as simple and as complicated as it’s ever been: Don Draper, like Peggy Olson, like Pete Campbell, like every character populating Matthew Weiner’s world, is everything. They’re everyone. They are every version of themselves they would and could ever be or have ever been.

The same could be said for many of television’s prestige dramas, sure, but only on "Mad Men" has the conceit been so built into the world from its inception. It’s a show centered on the idea that these people, these ad men, were the architects of culture at large. In the pilot, Don Draper says of love, "The reason you haven’t felt it is because it doesn’t exist. What you call love was invented like guys like me, to sell nylons." This is what he believes. This is what they all believe. They believe themselves to be the arbiters of taste, shaping the public consciousness and dictating the American dream. Don Draper believes that he writes the lies that make the whole world turn.

And he does. But his fatal flaw is not that he lies. It’s not even that he knows he lies. It’s that he does not have the wherewithal to resist the allure of his own lies. Don Draper thinks he invented love, but that does not stop him from seeking it. Peggy Olson knows that the nuclear family isn’t something that exists anywhere but on a television screen anymore, but that doesn’t prevent her from feeling like a failure for not achieving it. So it is for Joan, who achieved partnership and independence but still longs for companionship. And Pete, who has sun and success and the mile high club but grates at the thought that he has failed at having his perfect family. Even Betty, so certain that the sum of her problems was a philandering husband, only to find that a more loyal version doesn’t see her any more accurately than the last, feels the strain of divergent selves. So often we tell ourselves that happiness is a destination that with proper planning and achievement is an inevitability in the face of our accomplishments. And we tell ourselves that because it’s easier to live with than the thought that happiness is found in those unexpected moments where we are content with what we have and where we are. 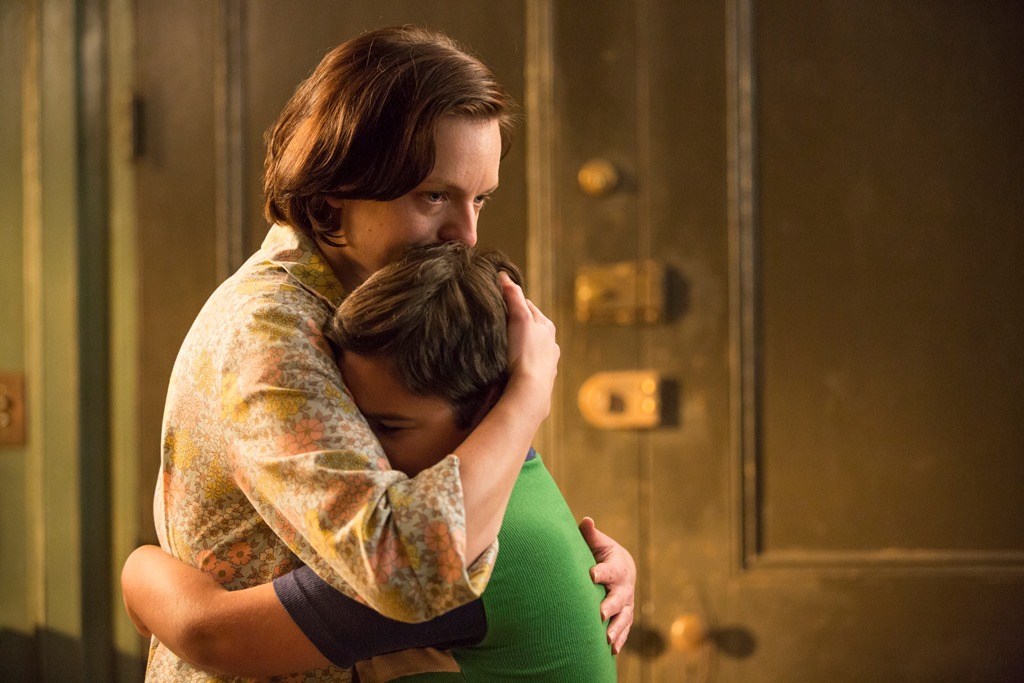 "Mad Men" has always been a show about duality, as evidenced most obviously with Don Draper and Dick Whitman. What "Mad Men" understands perhaps better than any show in history is how lives are privy to split; paths dividing at a fork and a single choice changing the entire landscape of one’s life. Don’s split when he chose to become Don Draper. Peggy’s split when she left her baby to a better life. Pete’s split when his father died. But lives never split just the once. There will always be another fork in the road, another separation to navigate. And if that’s all life is—a singular path to be walked, the choices unmade left in the shadows—it would be difficult enough. But "Mad Men" also knows that though there are splits; there’s never really a divide. Those other selves haunt us always.

Dick Whitman may not have been chosen, but he’s still present. He wasn’t left in Korea. He still lives inside Don. He’s the one who pangs over forgetting Peggy’s birthday. He’s the one insistent that the niece of the man whose identity he stole is taken care of; an act of continued fidelity to her deceased aunt. Peggy scoffs at her own understanding of motherhood but she will never excise the part of herself that is a mother. Tormented as she may be at her inability to nurture her own child in the wake of his birth, her maternal instincts are more than evident in her tears over her Julio’s pending departure. No matter the difficulty any of us feel in navigating the forks of our path, it is folly to think they are really behind us. They flank us all of our days, silent specters standing by. 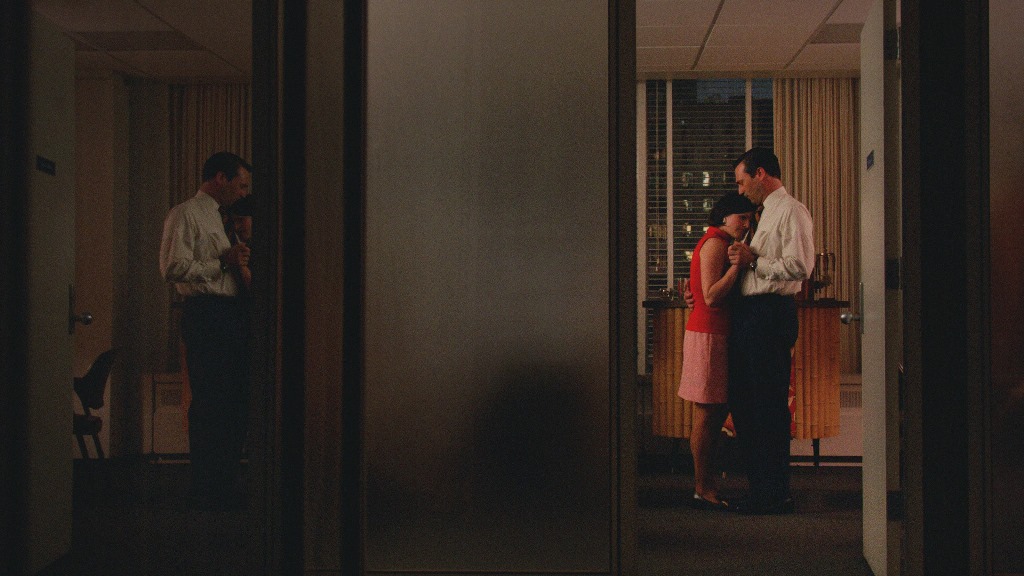 It’s not merely in how they view their past that these characters struggle  but how they view themselves in the present. So much dissonance on "Mad Men" comes from the distance between where the characters are and where they think they should be; between what they have and what they want; between who they think they are and who they are in reality. The moments that resonate the most for audience and characters alike are those where the space between is the smallest. In "The Strategy," that’s after Peggy and Don bare their souls for the first time in ages. The scene ends with the two sharing a dance. Even the framing of the scene reflects this. While Peggy and Don dance in the right hand of the frame, their other selves, true or idealized are reflected on the left, perhaps as close as they’ll ever be to uniting into a fully-formed unit.

This is "Mad Men," the exquisite divide between what we expect and what we get; who we are and who we are perceived to be. What the show is, what it represents, is never so obvious as when looking at the big picture. It’s a show that sold itself as being about an anti-hero with all the power, all the control, before revealing itself to be about a group of individuals who are not immune to the expectations of everyday life or the loneliness that often accompanies the pursuit of our desires. It is a show that put up a façade centered around the perfect male specimen, a throwback to a time when men were still truly men and he was the ultimate alpha subverted its own perceived narrative by making their alpha male a construct. Don Draper was built from nothing by Dick Whitman, beta male, as a method to survive and thrive in the world as he understood it. But even that is not the story "Mad Men" is telling. Where others would tell a tale of a man’s triumph over adversity, "Mad Men" says that no matter how difficult that man’s journey may have been there will always be a world of people who had it harder. "It came easy. You don’t trust it," Stan tells Peggy regarding the original Burger Chef pitch. "It didn’t come easy at all." That’s the story "Mad Men" is telling. This is not the tale of one man’s triumph. It’s a tale of how there is no single narrative. There is no lone protagonist. With time you will be relegated to supporting character. 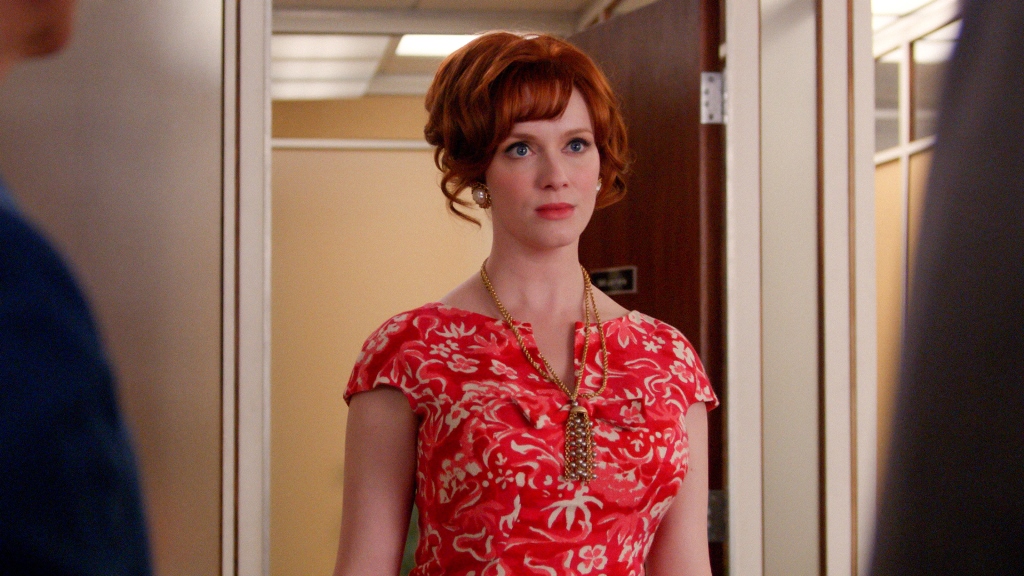 The question then is how isolated has their journey become and will they find it worth the cost? As we leave the front half of season seven, Don and Megan have parted ways; Peggy is alone, save for the occasional companionship of a 10 year old boy; Joan has her mother and son but lacks for love; and the list goes on. Everyone sets goals that they are sure will make them happy and focuses on them to such exclusion that personal relationships often fall by the wayside. So ingrained is this loneliness to the characters and the world they live in that Peggy sells Burger Chef in the finale as a place where everyone gets what they want, when they want it, a place where the starvation in your stomach and in your soul is sated. The Shangri-La of "Time Zones," the Utopia of "Babylon," all made manifest in mid-level fast food form.

Perhaps it’s only appropriate that she does so considering that in early July of 1969, mere weeks before Peggy Olson wins Burger Chef and Roger Sterling becomes a leader and Bert Cooper loses his life and Don Draper makes the pitch of his life and a man walks on the moon, the Rolling Stones released "Honky Tonk Woman" and, as its B-side, a song that would not chart until years later. It may have been that to mention it by name would have been too on the nose for a show as deft as "Mad Men" but it was clearly not far from the creative team’s mind. Peggy mentions dad liking Sinatra ("My Way" perhaps?) while the son likes the Rolling Stones mere moments before asking about a place where everyone gets what they want. It’s on that famous B-side that Mick Jagger intones, "You can’t always get what you want, but if you try sometimes, well you just might find, you get what you need." No one knows this better than the characters of "Mad Men." But that lesson has been so painful to learn. They haven’t gotten what they need in lieu of what they’ve wanted. They all got exactly what they wanted in lieu of what they needed. But it’s not too late for them. It’s not too late for any of us. Because, ultimately, what the "Mad Men" midseason finale leaves us with is a sense of relief. There’s still time. For them. For us. And that’s not just what we want. It’s what we need.