They should have called it “Run.” As one would expect with a conspiracy-laden thriller, that’s what characters do a lot of in USA’s new limited series “Dig,” premiering Thursday, March 5th at 9pm EST, a show that boasts a talented cast working with high production values but in pursuit of a story that only gets sillier as it progresses. Escapist fiction, the kind we often turn to in airports or on beach vacations to turn off our brains and turn on our guilty pleasure sensors, has an amazing ability to push or pull. The convoluted narrative either pulls you in with its layers of intrigue and mystery storytelling OR it pushes you away as it gets so nonsensical and overheated that you give increasingly less of a damn. “Dig” is way more of the latter, despite the best efforts of a talented cast. I just didn’t care, and I cared less and less as the first three episodes unfolded. 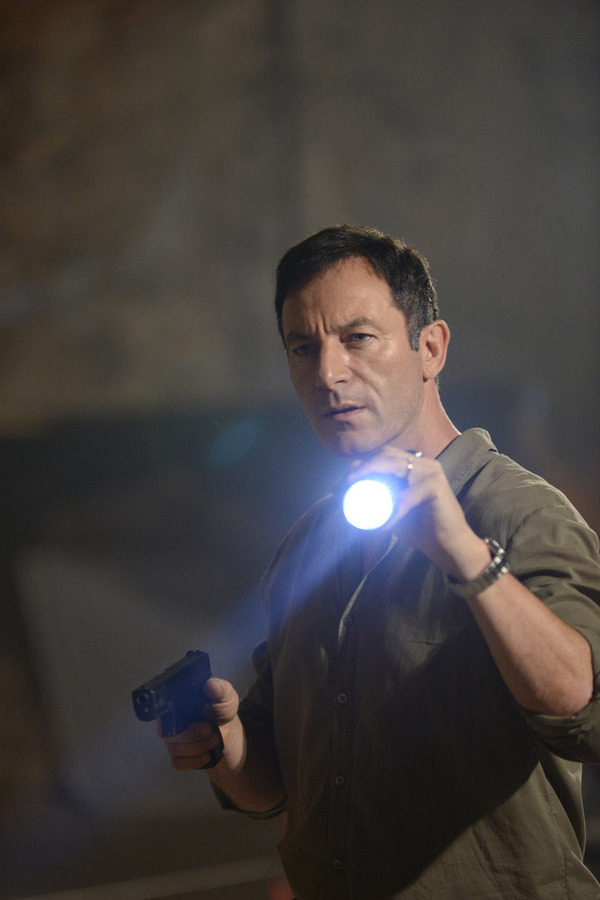 Remember when Dan Brown was the hottest name in fiction and film as his books and the movies based on them like “The Da Vinci Code” and “Angels & Demons” blew up the box office? Our taste in pulp fiction has skewed a bit more carnal than biblical, and so have the hit films—“Fifty Shades of Grey,” “Gone Girl”—but don’t tell the producers of “Dig,” Tim Kring (“Heroes”) and Gideon Raff (“Homeland”). They have designed "Dig" as a limited run series, which one presumes means we’ll get a definitive ending, although we thought that would happen with “The Killing” too; so never make assumptions.

The great Jason Isaacs (who deserved a better fate for his work on “Awake”) stars as FBI agent Peter Connelly, a man who seems to have run halfway around the world to avoid his personal demons. He has been stationed in Israel, and just happens to be sleeping with his boss (Anne Heche) when he crosses paths with a mysterious woman who leads him down a rabbit hole to conspiracies, prophecies, and a whole lot of running. Meanwhile, Lauren Ambrose plays a guardian for a child who seems to have been kept in captivity his entire life until he reaches a certain age when, well, something bad will likely happen. There’s another subplot about a cow that will surely tie in as well. Yes, a cow.

“Dig” takes itself SO seriously that it’s impossible for you to do the same. The best pulp fiction often has a wink its eye and a spring in its step that’s just missing here. The dialogue is overloaded with self-serious lines like “I’m sorry to tell you but sometimes bad things happen to good people” and the producers don’t even make the best use of their location, although that’s probably because the entire production had to leave Jerusalem after shooting the 90-minute premiere because of the current violence in Israel.

In the end, “Dig” reminds one a bit too much of the previous programs of its creators, “Heroes” and “Homeland,” although it doesn’t have the hook of the former or the performances of the latter. There’s no reason to get below the surface of this one.