Syfy's "Blood Drive" is a "Grindhouse" for the DTV Era

Syfy’s new series “Blood Drive” boasts what you call a very tempting premise—a cross-country death race where the cars are fueled by human blood. It owes more than a wink to grindhouse classic “Death Race 2000,” one of many films that it wants to be the TV-MA remix of as a type of throwback, gory chunk of self-aware B-TV trash. Those prove too-high aspirations for this series, given that there’s maybe two minutes of driving each episode (supporting racer clowns like Fat Elvis and Clown Dick sadly underused) and it doesn't look too much like a production from the '60s or '70s. But instead of its initial promise to be like a “Cannonball Run” for the “Sharknado” crowd, the series wields a clear ability to highly amuse those who want to see character tropes and genres smash into each other and spill a ton of guts in the process.

Created by James Roland, “Blood Drive” narrows its racing focus on two participants in the title event. A woman named Grace (Christina Ochoa), her prominent ass-kicking nature taken directly from a Tarantino rough draft, is trying to earn the prize money of $10 million so she can pay for her sister’s medical bills. Grace is paired up with a naive cop named Arthur (Alan Ritchson) who stumbles into the Blood Drive race party with the same horror as the astronauts meeting the ghosts of mars in “John Carpenter’s Ghosts of Mars”; he takes a stance of both being forced to race but not wanting to kill. In a sign of how the show tries to tame itself, he’ll even try to arrest a few characters along the way despite the lack of rules in society. Grace and Arthur encounter different places like a mental hospital where the patients are addicted to candy, a factory where everyone speaks in corporate jargon, a weird riff on Themyscira from "Wonder Woman" and more. Every now and then, we get to see someone thrown into the jaws of Grace's engine, which chews up people and turns blood into gas.

Meanwhile, Arthur’s cop partner Christopher (Thomas Dominique) is kidnapped and turned into a type of cyborg slave for the evil, omnipotent Heart Corporation (references to actual slavery are thrown in as the show’s ugliest but laziest effort), while the flamboyant master of ceremonies Julian Slink (Colin Cunningham, who will win you over as the show goes on) has his own determination to keeping the Blood Drive in action, even when the event is picked up for syndication by Heart Corporation. “Blood Drive” expands from its racing narrative and becomes a plot about waving a blood-soaked middle-finger to conglomerates, all while being aired between commercial breaks on a channel owned by Comcast.

There’s an exciting ambition to the show in its narrative scope, like in how each episode feels like a circus and ends on a fairly big action sequence. The show is its own comic-con of costume ideas, from the aforementioned Clown Dick to Slink and Marama Corlett’s Aki, a multi-outfitted cyborg cop woman who controls Christopher. Plus, the practical effects, like devoured flesh and the oceans of blood, are always aces. But as someone who has now seen every episode of “Blood Drive,” I can safely advise that there are some throwaway episodes in the middle, and that the whole ride gets competitive: Grace and Arthur wander into some type of morally dystopic community, fight off its inhabitants, return to the race. 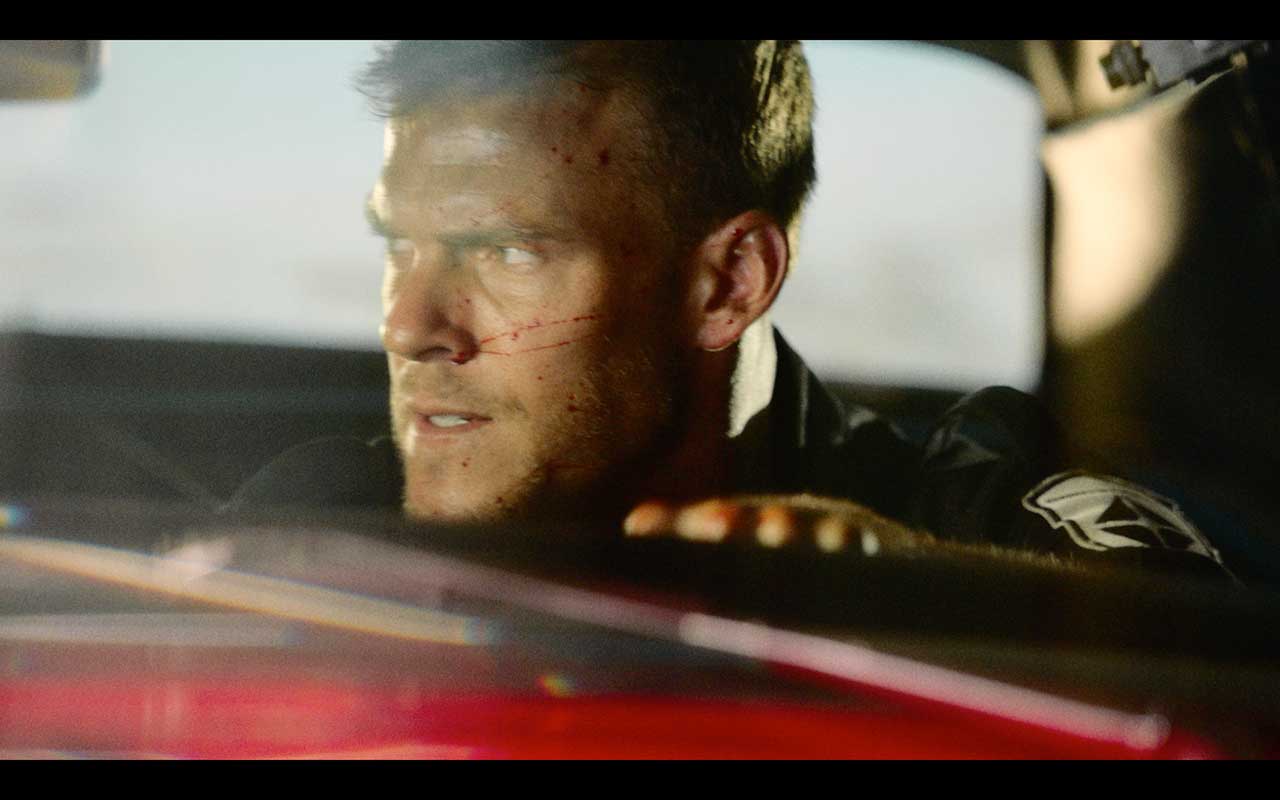 “Blood Drive” has the air of a series that has bitten off far more than it can chew. It certainly gives up the whole grindhouse aesthetic early with its opening car chase featuring overhead helicopter shots and a too-shiny look, one that it maintains throughout. The series does use a “power going out” effect whenever it’s time for commercial break, but that’s just another reminder as to how that doesn’t compare to a film print burning up on the screen in a dark theater.

At the same time, "Blood Drive" does save the best for last, with its last three episodes creating some gripping, emotional spectacle out of its kitchen sink mentality. “Blood Drive” comes into its own as previously tedious character storylines start to intersect, and relationships are fully realized (Ritchson and Ochoa especially get to shine with showing more comedic and dramatic range). The series even gets its own distinct flavor in these last episodes, and in this case, the lack of racing is substituted by a high-stakes, action-horror-sci-fi spectacle that’s far more exciting. It’s enough to make you wish the rest of the show had the same impact, since it clearly has that creative potential.

Curiously enough, “Blood Drive” didn’t remind me of first seeing Robert Rodriguez and Quentin Tarantino’s directly influential “Grindhouse,” and then afterward devouring the '60s and '70s flicks that inspired it. Instead, “Blood Drive” reminded me of the contemporary grindhouse—direct-to-video action-horror-sci-fi movies from filmmakers like The Asylum that carry the cause of weird, cheap, sleazy. You used to be able to find them on the bottom shelves at Blockbuster, and now they’re on Netflix with the same degree of misleading title art. “Blood Drive” honors those contemporaries by being its own compendium of various cheap film sets and sporadic junky thrills, especially when directed by the likes of “Death Race 2”’s Roel Reine (whose car chase in episode six is a series highlight). While it is no heir to what Rodriguez and Tarantino did, "Blood Drive" is an indulgent "Grindhouse” for all the modern direct-to-video goofiness and weirdness you can only watch at home now anyway.