Sundance TV’s “Hap and Leonard” Will Satisfy Those Missing “Justified”

Like a lot of hot Southern days, Sundance TV’s “Hap and Leonard" (premiering March 2nd) sometimes feels longer than average, drawing out each dynamic within it with that casual, in-no-hurry-at-all style. It’s a Southern potboiler that moves to a different rhythm than what TV fans in 2016 may be accustomed to or may even be expecting with a set-up that promises shoot-outs and wisecracking attitudes. At its best, it recalls both the charm and wit of FX's “Justified” but filtered through a different writer’s genre-bending tone that's different from Elmore Leonard. Adapted from a series of novels by beloved writer Joe Lansdale and by the team who also gave us the film version of Lansdale’s “Cold in July,” “Hap and Leonard” works its strengths slowly, until you’re eager to see where these characters are headed next and how they’ll work their way out of what looks like an increasing degree of trouble. As the Southern day gets hotter, “Hap and Leonard” just gets more and more entertaining. It will be too slow for some, but you’re likely to enjoy the heat.

“Hap and Leonard” centers on an unlikely pairing in its title characters—not only are they black and white in a part of the country often defined by racism, but Leonard (the great Michael K. Williams of “The Wire” and “Boardwalk Empire”) is an openly homosexual Vietnam vet, while Hap (James Purefoy) is a heterosexual draft dodger. And yet they are best friends, the kind of guys who always have each other’s back with no explanation needed, despite the raised eyebrows from those around them who can’t quite understand their dynamic—which is pretty much everyone. It’s 1988 in the deep South and no one is safe. 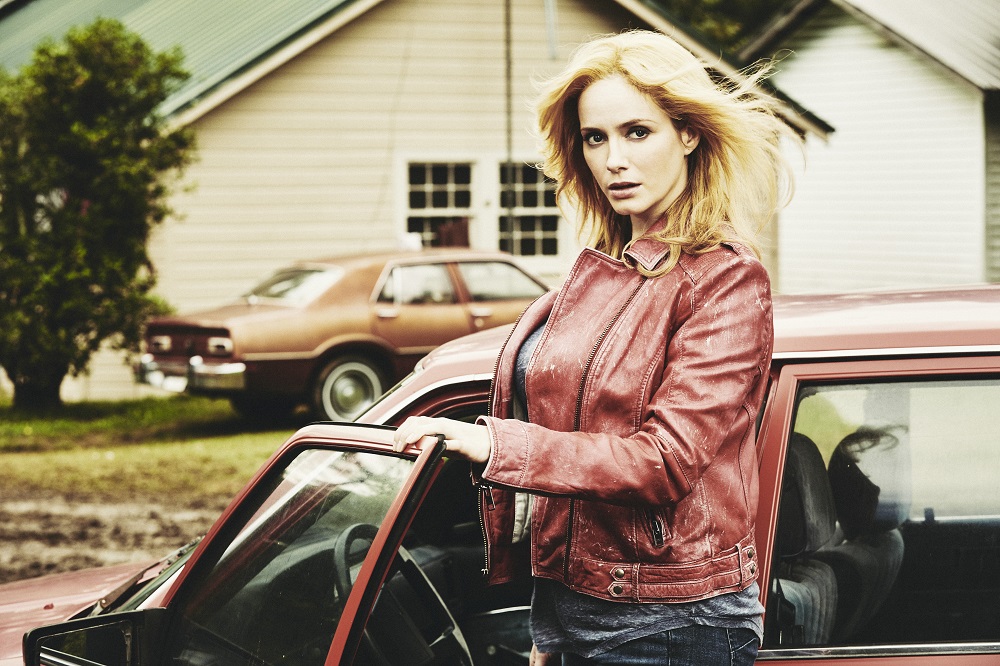 Jim Mickle’s (“We Are What We Are,” “Cold in July”) adaptation, created in conjunction with his film writing partner, Nick Damici, takes place in 1988 as Hap and Leonard lose a job and find themselves desperate for money. As is always the case with noirs, that’s just when the femme fatale enters the scene. This time, it’s Hap’s ex-wife Trudy (Christina Hendricks), who tells the pair about a car of stolen money that is just lying in a riverbed waiting to be picked up. Trudy has a team, including another ex-husband who preaches world change with the money they’re going to fish out of the river. Of course, there are “complications” in the plan, but Hap is clearly still in love with Trudy, and she may reciprocate. Leonard knows something is up and doesn’t trust the woman who has returned to mess with his buddy or the hippies she brought with her.

Lansdale’s work is often characterized by shocking outbursts of violence and the ones here certainly qualify. It’s the kind of offering that can lull you with its Southern twang and then remind you that it’s not your typical drama. As such, it sometimes draws comparisons with Sundance TV’s great “Rectify,” a show that truly pushes genre with its unique rhythms that feel more like independent film than television. It’s not quite that ground-breaking, but I like how bizarrely unpredictable “Hap and Leonard” can be in that it can alternate between reminding one of "The Dukes of Hazzard," “Double Indemnity” and “Henry: Portrait of a Serial Killer.”

Mickle and company are completely unapologetic when it comes to their noir-ish dialogue and have cast people who get the tone of lines like “A mull takes as long as a mull takes.” When Hendricks says, “Hey, cowboy, want to take a ride?,” she sounds more than ever like she could have been a movie star in a different era. Everyone involved in “Hap and Leonard” embraces its tone and its willingness to go dark. Purefoy sometimes mistakes sleepy for introspective but his low-key take grew on me. As for Williams and Hendricks, they’re quite simply always good and often great.

Ultimately, “Hap and Leonard” is about people too busy having sex and trying to pay rent to worry about changing the world. Like so much noir, and great television of any genre, it is about people who keep treading water. And its creators and stars never forget that the keys to a show like this are to keep it fun and keep it moving, even if it does move at its own, distinctly Southern pace.