Every episode of Showtime’s “Happyish,” premiering Sunday, April 26th, opens with a rant that would make Lewis Black proud. In the premiere, Thom Payne (Steve Coogan) rails against the ghost of Thomas Jefferson for failing to define the happiness we should all supposedly be pursuing. It ends with an extended middle finger and a solid “F**k you, Thomas Jefferson.” Subsequent episodes feature rants again Carol Brady (for her impossible-to-achieve portrayal of domesticity) and, believe it or not, God. Seems a bit early to bring the Almighty into this. 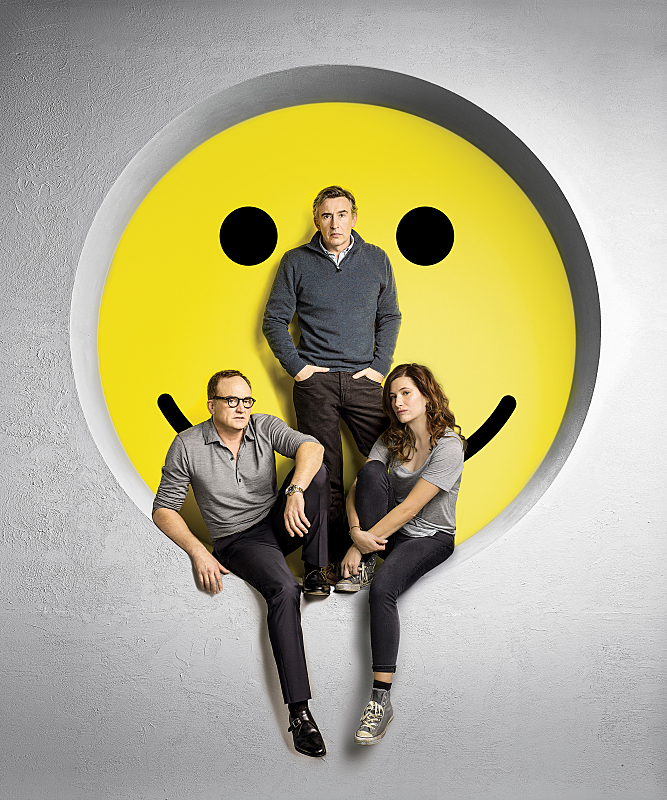 “Happyish” purports to be a commentary on how the trends of modern society have lessened pursuits like intellectual discussion or human connection. It conveys such a message with such brute, unrefined force that it’s impossible to take seriously. Poor Steve Coogan, a talented actor in both drama and comedy, gets stuck in the middle of a show that uses him as a mouthpiece for its alleged brand of satire instead of giving him a real character. “Happyish” tackles the shallow nature of society in such a smug, self-serving way that it doesn’t even pause to realize a rant against poorly written, obnoxious cable comedies might deserve a hearty “F**k you” most of all.

Thom Payne is turning 44 in the premiere, a ripe age for a mid-life crisis and realization that the generation gap has grown deeper in the last few years of social media prevalence. Kids are getting softer, young people don’t work as hard, getting old sucks, etc. The dialogue in “Happyish” sounds forced and overly written from minute one, as adults honestly discuss whether or not they'd be better off raising their kids to be a "pussy" or an "asshole". Thom, his wife (Kathryn Hahn), and another couple who were over for dinner are hanging out outside, smoking weed, and talking about genital surgery while their kids watch “Frozen” in the other room. Does that happen? It’s probably happened before, but the blatant desire to be “edgy” bleeds through every line of dialogue and every false proclamation. Bradley Whitford, as Payne’s colleague at an advertising firm, has actually been given the first line of “Gotta hand it to Bin Laden,” leading into a speech about how 9/11 branded and marketed Al-Qaeda. Ugh.

“Happyish” is filled with this kind of false insight: “Thinking is not as important as tweeting.” Oh, really? Yes, Twitter often leads to lowest common denominator discourse. What does that bon mot gain us in terms of character or even social commentary? Nothing, of course. (Although I’ll admit the line “It’s Lord of the Flies out there, and everyone over 18 is Piggy” made me laugh.) In the world of “Happyish,” everyone but Thom is an idiot. They don’t read enough, they use social media too much, they value Frank Miller over Henry Miller, and they love Steve Jobs but have no idea who Samuel Becket is. And yet the wild miscalculation here is that Thom and his wife are so extremely unlikable that “Happyish” makes the opposite point that its creator intends. The twentysomething executives who want to rebrand the Keebler Elves are portrayed as annoying, illiterate morons, but they seem closer to actual happiness than the Paynes. I'd much rather spend time with them.

Perhaps that’s the point. Perhaps this is all broad satire designed to remind us that ignorance is bliss, and we can only find happiness when we embrace our social media overlords and the generation that will replace us. That could be true. You know what else would help on the road to happiness? Stop writing shows with characters who portray middle age as a wasteland of self-righteous judgment and false proclamations of “what’s real.” Trust me, it’s possible to be happyish even in a world of morons and social media addicts. Although shows like this make it more difficult.