"Raising Renee" premieres on HBO2 Wednesday, February 22 and is available on-demand at HBO on Demand and HBO Go thereafter.

"Raising Renee" is an accommodating look at the relationship between an award-winning painter, Beverly McIver, and one of her two older sisters, Renee. Although Renee is in her forties, she has the mindset of a third-grader. After their mother dies, Renee goes to live with Beverly and Beverly spends about six years "Raising Renee." 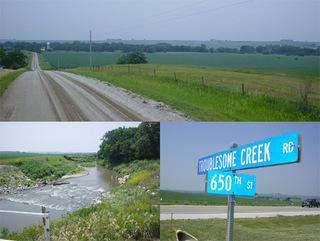 This is the third look at a family facing life-changing problems from the husband and wife filmmaking team Jeanne Jordan and Steven Ascher. Their first was the personal 1995 "Troublesome Creek: A Midwestern," in which Jordan's own family attempts to save their Iowa farm. Given the Audience Award and the Grand Jury Prize for documentary at Sundance, it was nominated for an Academy Award for best documentary feature.

Their second, "So Much So Fast," looked at the then 29-year-old Stephen Heywood who discovered he had amyotrophic lateral sclerosis (Lou Gehrig's disease), a paralyzing neurodegenerative illness. Despite his diagnosis, Heywood gets married to Wendy; they have a child. Heywood died in 2006, but the self-taught architect inspired his brothers to co-found a website for ALS patients and an institute for research into treatment, the ALS Therapy Development Institute. 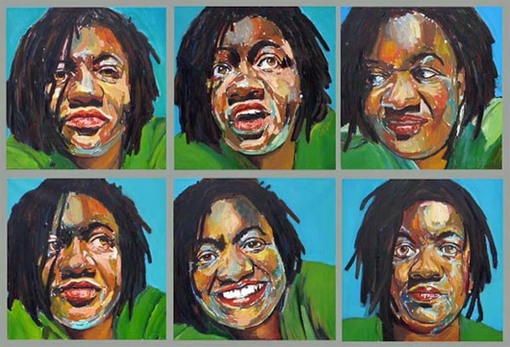 In "Raising Renee," we are introduced to Beverly at the opening of her art show in New York in 2003. It is such a big deal for her that she flies in her mother Ethel and her older sister Renee, from Greensboro, North Carolina.

Beverly's paintings are large, colorful canvases--portraits of people painted with broad strokes. The dark-skinned faces are highlighted with greens, reds or yellows. These are ordinary people who in no way attempt to conform to the societal parameters of light-skinned, slender beauty. Their flesh is heavy and hangs in layers, unconfined by multiple layers of heavy duty spandex. Sometimes Beverly, a heavy-set but charming woman, paints herself in black face. Many of her portraits are of Renee.

Soon after this career high, Beverly becomes Renee's guardian when their mother dies of cancer. This isn't one of the cute situation comedies like the 1987 "Baby Boom," in which a career woman is suddenly saddled with a child... and learns to love it. Renee has never lived alone. Beverly prefers to live alone, save for her cats. The third sister, Roni, is married and live in Greensboro with her husband and teenage son. One wonders why Ethel decided to leave Renee with Beverly. 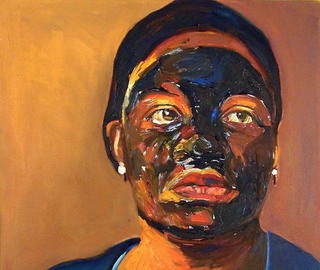 Greensboro wasn't a nice place to grow up black and poor in the 1960s. Ethel was a maid and single mother raising three girls in a city where the Civil Rights movement held sit-ins, and where during a 1979 rally, the Ku Klux Klan fatally shot five people in front of the McIver's place in the projects.

Attending North Carolina Central University, Beverly escaped poverty with her art, in which she provocatively questioned racial and sexual stereotypes, angering some black critics with her blackface portraits. Beverly received the Anonymous Was A Woman Foundation grant, a John Simon Guggenheim Fellowship, a Radcliffe Fellowship from Harvard University, a Marie Walsh Sharpe Foundation award, an Alumni Award from Pennsylvania State University (where she earned her M. A.) and a Louis Comfort Tiffany Foundation Award. While her artistic focus seems to be on her family, her emotional viewpoint is that of an outsider. 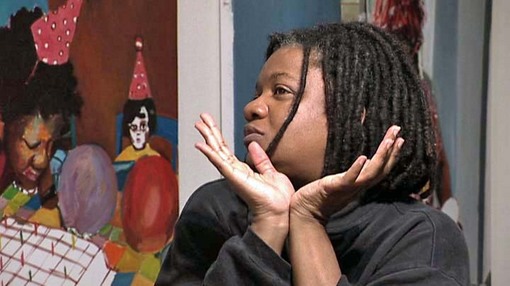 Early on, Beverly admits she has anger, even rage about losing her independence. If Renee feels rage, we don't see it. Renee moves into Beverly's spacious home in Arizona; Beverly's been teaching at Arizona State University in Phoenix for over a decade. Renee chooses the biggest room as her own and Beverly buys Renee all new furnishings. They settle into an uncomfortable rhythm. Ethel and Renee spent most of their days together, yet now Renee is now alone all day, eagerly awaiting Beverly's return. Beverly longs for the solitude and the less-needy companionship of her cats after a long day at work.

The Southwest has inspired artists. Think of Santa Fe, New Mexico and Georgia O'Keeffe. In Phoenix, Native American art is well represented by the Heard Museum. Even though Phoenix is predominately white, the philosophies of the Native Americans and the culinary practices of the first immigrant settlers, the Mexicans, infuse the food and culture. From Texas to California, salsa is as common as ketchup, along with other familiar Mexican foods. While bolo ties are not as commonplace in California, they are the official neckwear of Arizona and New Mexico and hark back to Hopi, Navajo and Zuni silversmithing traditions. 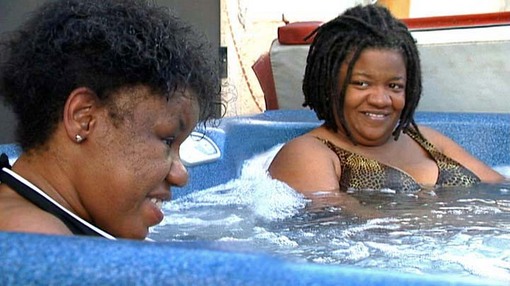 When Beverly notes that Renee wants a boyfriend, a white boyfriend in Phoenix, and in passing mentions her own search for a black man, the discussion of race curiously is restricted to black and white. While whites make up 71 percent of the Phoenix population, the non-Latino white population has been under 50 percent since 2000. Latinos make up 34 percent. African Americans are 5 percent. Greensboro is 48 percent white and 40 percent black.

Just how insular is Beverly's world?

In the documentary "Billy the Kid," that newcomer Billy embraced the Latino culture in New Mexico, and historians considered his acculturation to be part of his charm and the main reason Billy was able to evade the law for so long. Yet in another era, a post-Loving v. Virginia world, we have a modern black woman, Beverly, who seems to remain separate from the Southwestern life available in Arizona. If there is a ghetto in Phoenix, it's a barrio because the poor in Phoenix are predominately Latino. In Greensboro, the blacks are a major minority population while in Phoenix they are not. 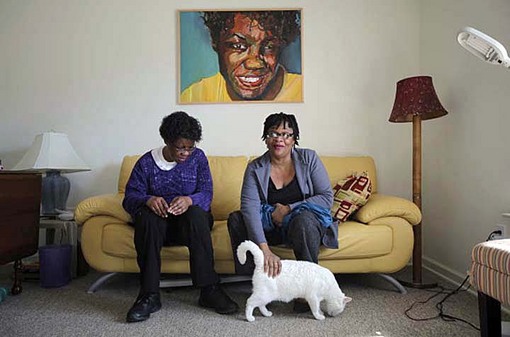 Beverly decides to move back to North Carolina so that Renee will have the support of family, friends and church. She accepts a position at NC Central University. When a relative moves into a disabled community, Renee moves into her own apartment. For the first time she is living alone but well-supported by her sisters Beverly and Roni, as well as other relatives and friends. Renee has gained a measure of independence.

Throughout this emotionally reticent documentary, one wishes for more contextual clues to these women and their sisterhood from directors Jordan and Ascher. Renee certainly has many obstacles to overcome, but what about Beverly? Her most tender, emotional moments are with her dying cat, Taylor. Is Beverly destined to become the dreaded cat lady? 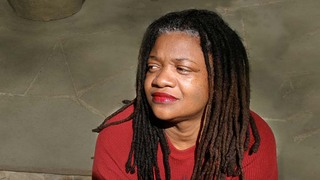 Is it race that kept Beverly alone in Phoenix? Beverly had constructed a neatly balanced life before Renee and her art had taken her out of the projects, out of North Carolina, but did this also preclude having a family because of the social restrictions on women and on women artists? Beverly would have been 23 when the Guerrilla Girls made the infamous protest asking "Do women have to be naked to get into the Met. Museum?" That was a year after the painter Alice Neel, an icon for the feminist movement died. The 2007 documentary on Neel, directed and produced by her grandson Andrew Neel, is less than complimentary and yet if Neel had been a man would we instead celebrate the neglect of family? On the other hand, does one want to raise one's own character assassin, a la "Mommie Dearest"? 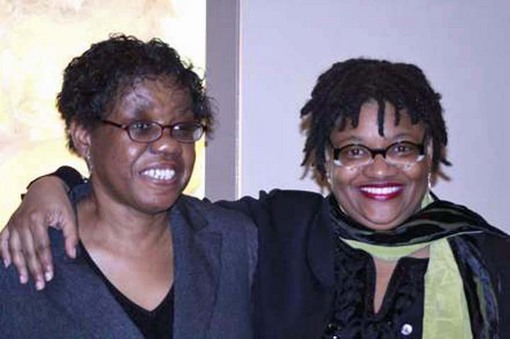 In weighing out her options, has Beverly chosen career over domestic bliss? Or is she simply narcissistic, as one online essay accuses?

How do we decide? If only the directors let us know more: What did the other faculty or students at Arizona State think about Beverly before and after she became Renee's guardian. Why didn't Beverly take Renee to school? Did the neighbors in Arizona befriend Renee? Were there no support organizations in Phoenix?

Perhaps, more importantly, what did the other family members feel, especially the older sister Roni, her husband and their teenage son. Growing up with a working mother, Roni must have shouldered the caretaking of both Renee and Beverly. 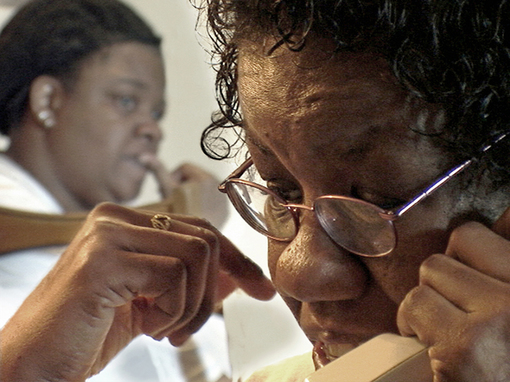 While Beverly talks about her desire for solitude, we see how Renee has become a part of her community -- calling in the names of people with birthdays to a local radio station, making her potholders and attending church. Beverly talks about being an outsider in her own family and yet her artistic vision seems insular and fixed on her family or herself.

Although Beverly has a series of paintings that were exhibited under the title "Raising Renee" and she must have known that her earlier blackface portraits would have caused outrage, in Jordan and Ascher documentary, Beverly comes across as utterly sincere and earnest, but slightly self-involved. Because of its lack of critical depth, "Raising Renee" is best viewed as a documentation of a phase of Beverly's work than a her life caring for a mentally disabled adult. 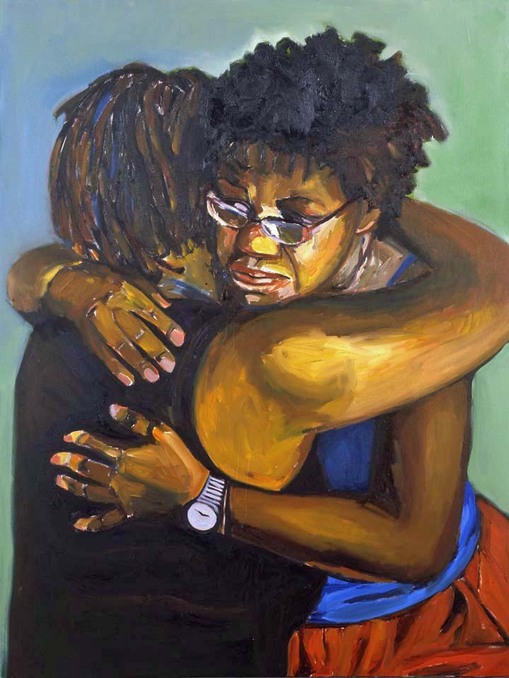