The world has changed since Jack Bauer arrived to save it. "24" premiered less than two months after 9/11 and its everyman agent thrown into a world of international intrigue struck a nerve with audiences who needed a new kind of hero. We didn’t just want Jack Bauer to find the mole and save the day. We wanted him to hijack a plane and find Osama Bin Laden for us. As "24" aged, the way we looked at issues inherent to the world of the FOX hit changed as well. As much as some would claim that our entertainment should exist in a vacuum apart from the real world, you didn’t look at scenes of torture in "24" the same way after waterboarding and Abu Ghraib became international stories. And the producers knew that. They both tried to adapt Bauer for the times by making him more of a rogue, outcast character, and weaved questions about the veracity of information obtained through torture into their narratives. Bauer headed off into the sunset as something of an icon of a time gone by.

And so his return four years after that Western-esque walk into the primetime sunset raises a natural question—how does our TV hero of the ‘00s play in 2014? How have the producers of "24: Live Another Day," a 12-part limited series that premieres with two hours back-to-back on Monday, May 5th, adapted Jack for an audience perhaps more attuned to deep narratives about international intrigue like "Homeland" than they were in 2001? The answer is obvious from the very beginning of "Live Another Day"—they have turned him into a superhero. He’s "Super-American," the unstoppable force that stands between us and destruction. 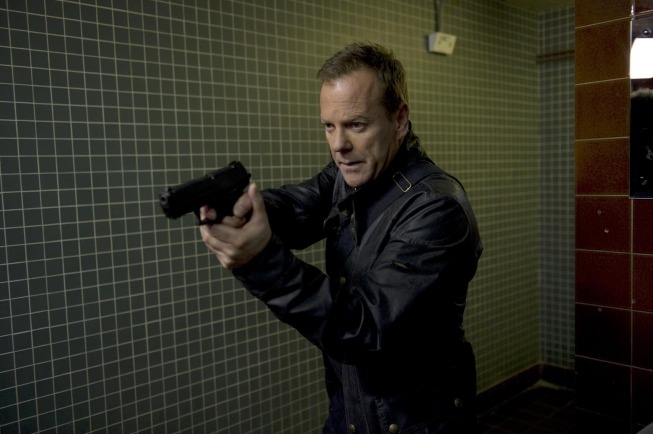 In the opening scene of "Live Another Day," a high-value suspect has surfaced in London. Of course, we know who the target is—Jack Bauer (Kiefer Sutherland), who has been off the grid for four years. As agents descend on Bauer, he takes them out like the Dark Knight in the shadows in "Batman Begins." A London agent named Kate Morgan (Yvonne Strahovski), who works under London CIA head Steve Navarro (Benjamin Bratt), finds it odd that Bauer doesn’t escape to the roof, choosing the much-more-dangerous route to the beach, where he’s captured. As would be obvious to most people (but, of course, no one believes Kate), an agent like Bauer who has remained free despite being one of the world’s most wanted for four years doesn’t make mistakes like that. He’s clearly been taken in because he wanted to be taken in. Why? What’s he trying to stop? I wouldn’t dare spoil. And Jack won’t open his mouth to reveal a thing for more than half of the premiere. Literally. Sutherland doesn’t have a line for over half of the first, real-time hour, other than the opening "Events take place in real time" introduction, which the actor says with a smile in his voice as if he’s welcoming back the fans who missed them.

Without spoiling where "Live Another Day" goes, the narrative of the first two hours does reunite Bauer with fan favorite Chloe O’Brian (Mary Lynn Rajskub) in an engaging, original way. The producers of "24" wisely recognized that they couldn’t bring Jack back without bringing back Chloe. It would be like a Bond movie without Q or M. It wouldn't be the same. Fans will also recognize William Devane as President James Heller and Kim Raver as Audrey Raines, who we haven’t seen since season six. The President is having health issues that he will have difficulty keeping under wraps when a drone goes awry on the first night. (Kudos to the "24" writers for staying on top of major issues by including the viability of drones in combat.) The supporting ensemble this season is well-assembled and includes Michael Wincott as an infamous hacker, Gbenga Akinnagbe as an agent who doubts Kate’s motives, the great John Boyega as a potential patsy, and Tate Donovan as the White House Chief of Staff who happens to be married to the President’s daughter.

When Jack Bauer is strapped to heart rate-monitoring machines to be interrogated, an agent notes that "His readings are unnatural." When it looks like a number of armed men have the drop on him, he says, "You probably think I am at a disadvantage. I promise you that I am not." And we know he’s right. Jack Bauer may have appeared on the pop culture scene as the man we needed to be a hero but he’s transcended that to reach mythological proportions. I half-expect him to join the Marvel Universe. I’ll admit that I sometimes miss the more relatable tones of early "24"—the first five seasons were spectacular—and doubt that the show can ever get there again, but the producers have so embraced the larger-than-life elements of their beloved character that it’s hard not to enjoy the show on those terms. We needed a hero in 2001. Maybe we need a superhero in 2014.