Growing up in Raleigh during the Civil Rights era, I had a friend whose father was a judge known for his waspish, sometimes surreal sense of humor. One day in court he did something that evidently angered the Ku Klux Klan, because when he got home there was a large cross burning in his front yard. Without hesitation, he yelled inside the house, “Kids, get the hot dogs!” So my pal and his siblings had a weenie roast over the burning cross—a rebuttal to the KKK that caused great hilarity across the state capital.

That provocation on the judge’s part was perhaps not as risky as it may sound. He had the advantages, after all, of being a white, socially prominent city dweller. But there was also the fact that, unlike its counterparts further to the south, the North Carolina Klan of that era proclaimed itself to be nonviolent, a distinction that’s central to the fascinating story told in Callie T. Wiser’s illuminating, expertly crafted documentary “Klansville, U.S.A.” (airing as part of the American Experience series on PBS on Jan. 13). 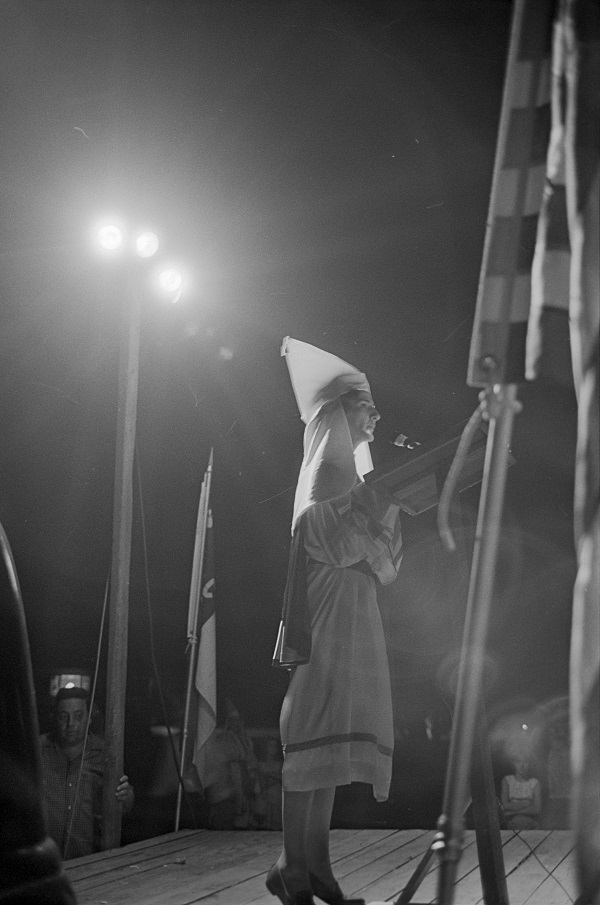 Wiser’s film shows that there was considerable complexity to the Klan during its three major phases, and even within each phase. Founded in Tennessee just after the Civil War, almost as a gentlemen’s club for ex-Confederate officers bent on reclaiming some of their lost prerogatives, the first Ku Klux Klan (the name derived from the Greek word for circle) used outlandish costumes to frighten former slaves trying to assert their rights. But the pranks soon turned into brutal terrorism and lynchings, with the result that federal authorities forcefully intervened and drove the group out of existence by 1871.

In a bitter irony, the Klan’s second incarnation was owed to the advent of the movies. Released in 1915, D.W. Griffith’s brilliantly crafted, three-hour “The Birth of a Nation” became American cinema’s first blockbuster with a story that showed the Klan saving the South from ruin after the Civil War. Hugely successful with white Americans of every class and region, the film inspired a new, nationwide Klan in the 1920s that, at its peak, had four million members and major chapters in places like Denver, Detroit and Portland. Less anti-black than Protestant nativist, with an animus against Catholic immigrants flooding into the country from southern Europe, this Klan elected ten governors but, due to press exposés and internal divisions, was effectively out of business by the 1930s.

The third Klan was, of course, a product of the Civil Rights era, having a career that lasted roughly 15 years, beginning with the storm of Southern anger unleashed by the Supreme Court’s blow against segregated education in Brown v. Board of Education in 1954. In North Carolina, the transition out of Jim Crow was accomplished fairly smoothly, thanks in large part to the state’s progressive political culture. So how did North Carolina end up with a Klan membership that dwarfed those of other states?

As “Klansville, U.S.A.” (also the title of a book by historian David Cunningham on which the film is partly based) tells it, the Klan’s success in North Carolina was partly owed to the fact that its political culture was so moderate. (Wiser amusingly and accurately suggests that N.C.’s self-image owed lots to the idealized version on “The Andy Griffith Show.”) States further south had racist demagogues like George Wallace in Alabama and Lester Maddox in Georgia, who voiced the rage of many whites in shaking their fists at “intrusive” federal civil rights efforts. Led by modernizing governors like Luther Hodges, Terry Sanford and Dan Moore, North Carolina had no prominent public mouthpiece for white anger and resentment…until the new Klan gave it one.

The visionary behind the Tar Heel state’s KKK revival was an ordinary-looking native of Salisbury, N.C., named Bob Jones, who claimed his mother marched in a 1920s Klan rally when she was seven months pregnant with him. After the civil rights movement kicked off with lunch-counter sit-ins in Greensboro in 1960, Jones sensed a rising tide of inchoate white antipathy. In August of 1963, he petitioned the United Klans of America to start a chapter in North Carolina, and he became its Grand Dragon. That same month, just three days after Martin Luther King Jr’s March on Washington, he advertised a Klan rally hoping to draw a few hundred sympathizers; two thousand people showed up. 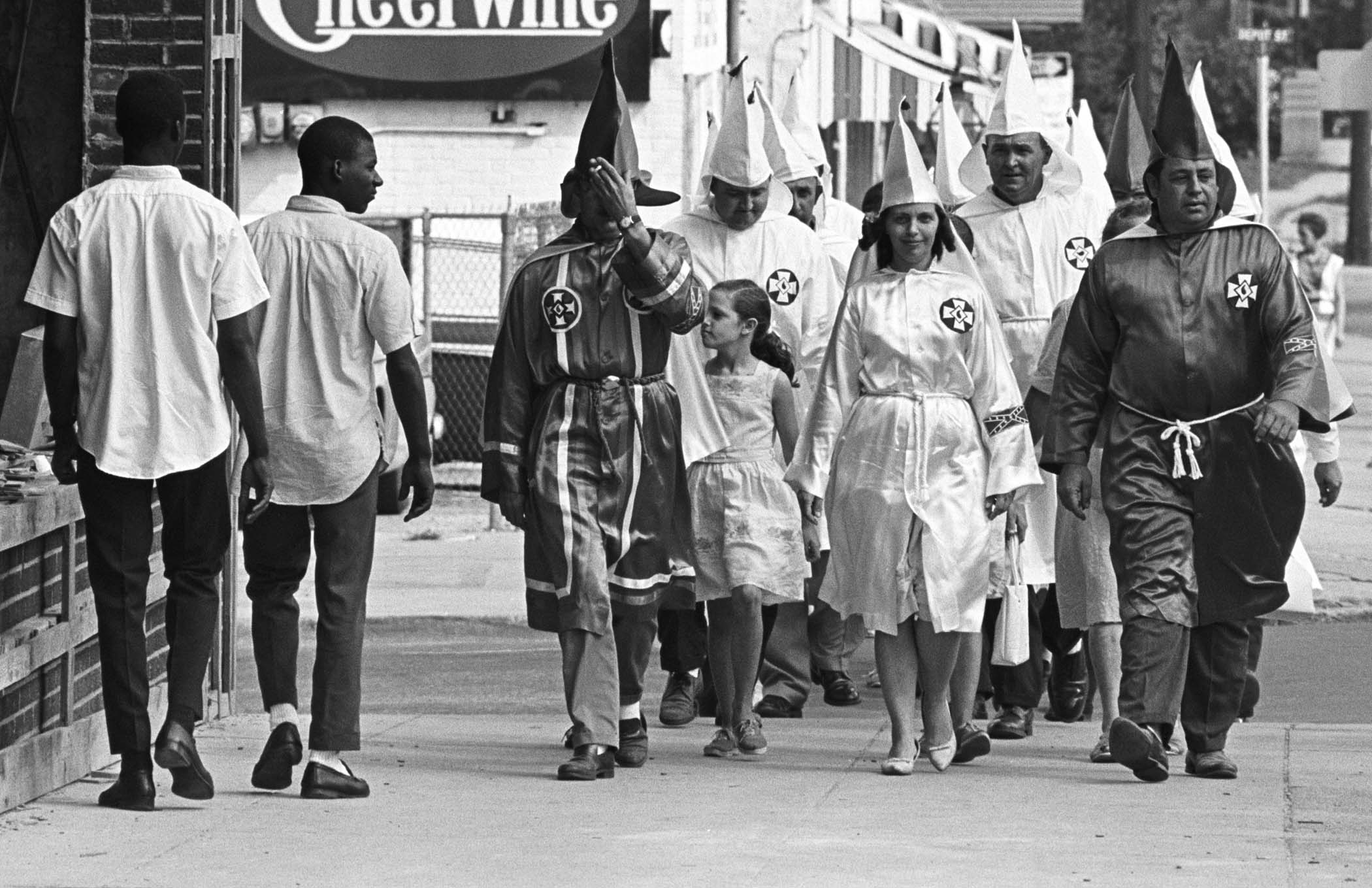 No doubt many educated, urban, middle-class North Carolina whites disliked the civil rights movement and the new laws it was about to produce. But these folks weren’t Jones’ constituency. He looked primarily to lower-class whites, mostly in small towns and rural areas, who thought that any rights, privileges and advancements won by others were being taken from someone: namely, them. Though his rhetoric was blatantly racist, Jones claimed he didn’t hate blacks or Jews. He told his followers: Those people all have groups representing them and helping them get ahead. “White gentile Protestants” are the only population without such a group. That’s what the Klan is for.

Though Jones had no degree in marketing, he seems to have had natural flair for it. Klan rallies in rural areas became popular because they were as much social as political. There were speeches, sure, but the family-friendly events also featured music, entertainment, invocations of God and Jesus, food and drink, even pony rides for the kids. They offered, in short, a whole evening’s worth of wholesome, patriotic diversion, capped by the burning of a giant cross.

Of course everyone understood the latter as a naked symbol of racial intimidation drawn from the Klan’s dark past. But Jones was careful to keep on the right side of the law. That’s where his avowed policy of nonviolence came in. He wanted the KKK to be a legitimate political force that could sway elections, as the 1920s Klan had. His Klan didn’t wear masks and appear only at night. They wore their robes, faces showing and like-costumed wives and kids in tow, as they staged daytime marches in Raleigh and other cities. And this old-wine-in-new-bottles strategy was a howling success. Within a couple of years, the N.C. Klan’s enrollment peaked at ten thousand due-paying members, and Jones, who paid himself from those dues, was driving a Cadillac.

A downturn in the Klan’s fortunes began when Jones symbolically crossed the line he’d drawn separating the N.C. group from violence and illegality. In 1965, driving back from Martin Luther King’s march from Selma to Birmingham (dramatized in the film “Selma”), a white civil rights worker named Viola Liuzzo was shot dead. When three Alabama Klansmen were charged with the murder, Jones invited them to be honored at a North Carolina Klan rally. Since President Johnson himself had gone on television to denounce the Liuzzo murder, it was perhaps no coincidence that the FBI soon took an interest in the N.C. Klan. Though J. Edgar Hoover had previously been interested only in monitoring civil rights activists and others suspected of communist affiliation, with Johnson on his back he quickly turned his attention to white-supremacist radicals. It wasn’t long before the N.C. Klan was laced with FBI informants including, as it turned out, Jones’ second in command, a flamboyant Baptist preacher named George Dorsett.

In another fitting irony, Jones’ own downfall came after he was called to testify before the House Committee on Un-American Activities and took the Fifth Amendment scores of times, shocking followers who thought only leftist radicals used that evasion. As Jones’ treasurer, who resigned on the spot, said, “Only a communist takes the Fifth Amendment, or someone with something to hide.”

By 1969, the new N.C. Klan was effectively kaput. But by then, the need for it had arguably evaporated. In the epochal election of 1968, former Dixiecrat presidential candidate Strom Thurmond rebuffed the candidacy of arch-segregationist George Wallace and threw his support behind Richard Nixon, marking the moment when the white South—of all classes, localities and education levels—became solidly Republican. With that kind of block, and a rhetoric of “law and order” having replaced that of race, who needed the old hoods, robes and burning crosses? Not North Carolina.