Effective Melodrama of HBO's "The Normal Heart" with Mark Ruffalo

Fantastic performances balance out Ryan Murphy and Larry Kramer’s melodramatic approach to the history of the AIDS crisis in HBO’s highly-anticipated "The Normal Heart," premiering Sunday, May 25th, 2014. The creator of "Glee" and "American Horror Story" has always been a writer/director willing to yank at heartstrings; subtlety has never been a strong suit. And yet perhaps it’s time for a film about the AIDS crisis that’s this emotional, in-your-face, and even manipulative. Be moved. Be angry. Be ashamed at the way our country addressed the fact that an entire community of people were dying. And be appreciative of a cast that can find the truth in the melodrama. In the end, Murphy is a fascinating dichotomy in that he works expertly with actors and actresses (even in a mess like "Eat Pray Love" and undeniably in every season of "AHS") and so the performances he draws from his inevitably-Emmy-winning cast play tug-of-war with his melodramatic leanings and, ultimately, win the fight enough to allow his film to resonate. 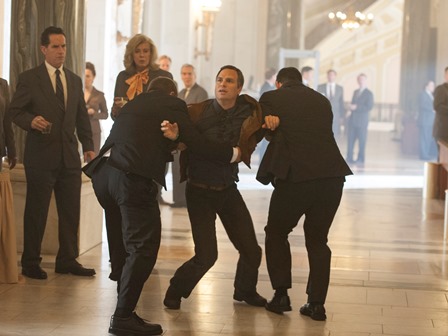 In a break from the play on which it’s based, Murphy’s film opens on Fire Island in 1981. In the opening scenes, naked men cavort, take turns shaving each other, and one falls down, coughing on the beach. Murphy nearly works in visual title cards: "These are gay men who are getting sick." A scene that follows shows Ned Weeks (the always-great Mark Ruffalo) noticing a headline about a "rare cancer" killing homosexuals, and the stage is set for a drama about the early days of AIDS, how it was ignored, the brave men who fought for the attention needed to treat it, the tragic stories of men who died and those who loved them.

It’s mere minutes before Murphy is offering close-ups of lesions, and yet it is this direct approach that often serves the story and the emotion of the piece. "Don’t look away as so many people in power did in the ‘80s." It also helps significantly to have an actor with the subtle gifts of Ruffalo front and center. Every time that Murphy threatens to drag the piece beyond the melodramatic pale, Ruffalo grounds it. Ned Weeks, a writer who clearly serves as a stand-in for Kramer himself, is a loud, proud, gay man, the kind of activist who pushed buttons, tried to pull people out of the closet for the cause, and believed in extreme measures to get attention. Ruffalo brilliantly plays Weeks as a man who is inherently shy and seemingly out of tune with his community (he’s often fighting with his friends and colleagues about how to approach the crisis and deal with their own sexuality) and yet he’s also the greatest champion of equality. Ruffalo finds a way to make him seem both insecure in his private moments and fearless in his public cause. He’s going to win an Emmy. Bet on it. 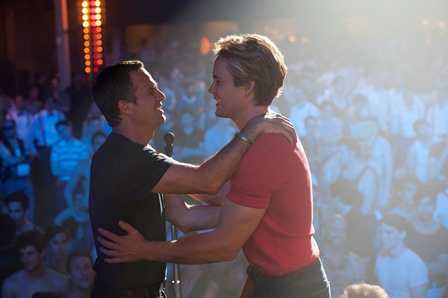 Ruffalo is ably assisted by a notable cast, including Alfred Molina as his brother, Taylor Kitsch as a friend and fellow activist, Jim Parsons as a colleague at the Gay Men's Health Crisis and Julia Roberts as the first doctor willing to address the cause. Not everyone works. Kitsch and Parsons seem a bit out of their leagues at times. But there are undeniably fantastic performances in here, particularly "White Collar" star Matt Bomer as Weeks’ boyfriend, a writer from the New York Times who is forced to cover fashion instead of AIDS, and Molina, who has a scene with Ruffalo that says so much about where we were with homosexuality and the AIDS crisis in the ‘80s in that Ned’s own brother just thinks his sibling is sick. Every moment between Ruffalo and Bomer has an undercurrent of emotional truth. We believe their relationship, making its inevitable trajectory all the more tragic. The star of "White Collar," who underwent McConaughey-esque weight loss for this part, proves he will have a career far beyond the day that his USA hit has ended. (It should also be noted that Broadway vet Joe Mantello absolutely destroys a monologue late in the film as a man at his emotional and intellectual end, unsure how to even fight any more.)

The scenes between Bomer & Ruffalo or the blow-up with Molina are indicative of the critical dilemma at the core of "The Normal Heart." As soon as you’re tempted to write off the soap operatic elements, an actor like Ruffalo finds the truth in the piece. Expect tears before the end of the first half-hour. Expect anger. Expect to be emotionally exhausted. We’ve seen subtle approaches to the embarrassing way our country handled the AIDS crisis of the ‘80s. Perhaps it’s time for a melodrama on the subject; time for a film made by a man willing to push the envelope and show not just the heartrending toll but the physical, bleeding, painful, horrible one paid mostly by the gay community but emotionally shared by us all.