I know what a lot of you are doing this weekend. The first season of "Orange is the New Black" shattered expectations for Netflix, ending up one of the most talked-about shows on all of television in 2013. There were reports that it was streamed more often and binge-watched in its first weekend more than the highly-buzzed return of "Arrested Development." And it’s a safe bet that Jenji Kohan’s hit comedy will be a player in this year’s Emmy nominees. "House of Cards" may have the star power but "Orange is the New Black" has a cultural cache and critical respect that other networks dream about. And it’s back. Season two premieres tomorrow, in its entirety. Cancel your plans. 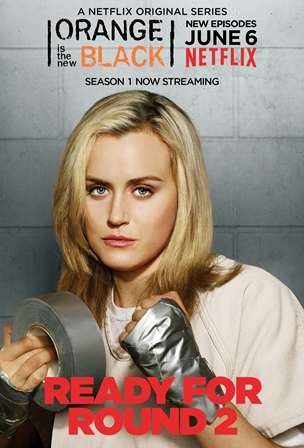 Kohan wisely adjusts her approach, with some notable assistance from Jodie Foster in the director’s seat for the premiere, but doesn’t really change much about what you love about "OITNB." (And it's definitely arguable that more drastic change structurally was in order as the first few episodes often feel like merely an extension of the last season.) The memorable characters, playful tone, and subtle examination of culture, gender, and social roles continue to impress, as does the underrated ensemble, led by more confident work from Taylor Schilling than in the first season. If anything feels different, that’s it. There’s a striking sense of confidence across the board. You don’t sense any desperation; any need to please, as you do in so much television. Like so many of its characters, "Orange" is what it is. Like it, hate it, they don’t care.

As the creator of "Weeds" loved to do in the prime of that Showtime comedy’s creativity, Kohan starts with a curveball. After the drama that ended season one, Piper (Taylor Schilling) has basically gone a little crazy in solitary. Without warning, she’s released from her solo confinement, put on a bus, put on a plane, and sent to Chicago. She’s not told why (and neither are we) nor if she will return. The decision to start the season of "Orange is the New Black" without the supporting characters or setting we know to anchor is emblematic of both Kohan’s creative daring and her keen understanding of the way Netflix can be used differently from standard TV. For a weekly series to start with only its lead after depriving a fan base of its ensemble for years might turn off viewers but Kohan knows that the Netflix model has changed the way people watch TV. Most viewers will push right through to the next episode, eager to return to the people they know and mostly love. (Before you do that, pause for a minute to appreciate what Schilling does in the premiere. It’s her best work to date.) Before you know it, you're done with two, why not watch three?

While I sometimes find it a bit repetitious in its character beats, much of the joy of "Orange is the New Black" comes in how it unfolds, the ways the writers and performers constantly defy expectations, and so I won’t spoil any of the plot details for season two. What I love most about "Orange" is the way it mixes its ingredients. Nothing feels underlined or highlighted for your nodding agreement. Sure, there are some undeniable feminist tones but they don’t feel accompanied by agenda as they would with lesser writers. They are part of the fabric, not the whole thing. There are socially conscious comments on the ridiculousness of our legal system and the people it incarcerates. But, most of all, it’s about people who defy their stereotypes. Kohan and her team start with the familiar, the cliche, and then deconstruct it.

The flashback structure allows for depth of character that we rarely see in weekly TV, and so "Orange" is a show that is constantly rewriting itself. The minute you think you know a character like Crazy Eyes (Uzo Aduba), you get a flashback (episode three is "her episode," as many are devoted to one character a la the first season) that shapes her in a new way. It’s one of the main themes of the show overall. You think you know the "average" woman in prison. You don’t. There is no model for the average prisoner. They all have unique, captivating stories to tell. And my bet is you’ll hear most of these stories before the weekend is over.