In the rich field of movies about Hollywood, there has rarely been anything as biting or hilarious as Robert Zemeckis’ “Death Becomes Her.” Zemeckis’ earlier “Who Framed Roger Rabbit?” was tempered by its warmth for Old Hollywood and forties Los Angeles, but “Death Becomes Her” is pure bile.

This 1992 dark comedy was a difficult sell to audiences, with ad campaigns using the film’s head-twisting effects as their angle. Tragically, “Death Becomes Her” never found a foothold with viewers in theaters, but has deservedly been building a cult audience ever since. After years of circulating with a pan-and-scan DVD, Zemeckis’ movie is finally on Blu-ray, via a collector's edition released April 26 through Shout! Factory. The film’s Chuck Jones-meets-“Sunset Boulevard” images have never looked better.

The story concerns two old dear friends who happen to despise each other deeply. Meryl Streep is Madeline, a fading actress who’s taken to paying the bills with ill-advised musical versions of Tennessee Williams plays. Goldie Hawn plays Helen, a tightly-wound writer whose mortal fear that Madeline will steal her latest man hasn’t stopped Helen from bringing him to meet Madeline. The man in question is Bruce Willis’ Ernest, who immediately falls under Madeline’s spell. The two are married soon after, sending Helen into a tailspin of cat hoarding and eating icing right out of the can.

Year later, things have gone sour between Madeline and Ernest. When Madeline and Helen reunite at a party, to Madeline’s horror Helen now cuts a svelte figure and a Rita Hayworth hairdo. It doesn’t take long for Helen to start giving Ernest a case of buyer’s remorse over the choice he made fourteen years ago. Increasingly desperate, Madeline follows her plastic surgeon’s advice and pays a visit to a strange estate house owned by Isabella Rossellini’s strange Lisle, who is dressed like Theda Bara with Louise Brooks’ haircut. For a price, Lisle sells vials of a glowing pink potion that promises eternal youth. After Madeline downs the potion, Lisle offers a cryptic warning to take care of her body, as she and her body are going to be together for a long, long time. Helen and Madeline soon enter an all-out war, as they learn the unfortunate difference between being immortal and being invulnerable. 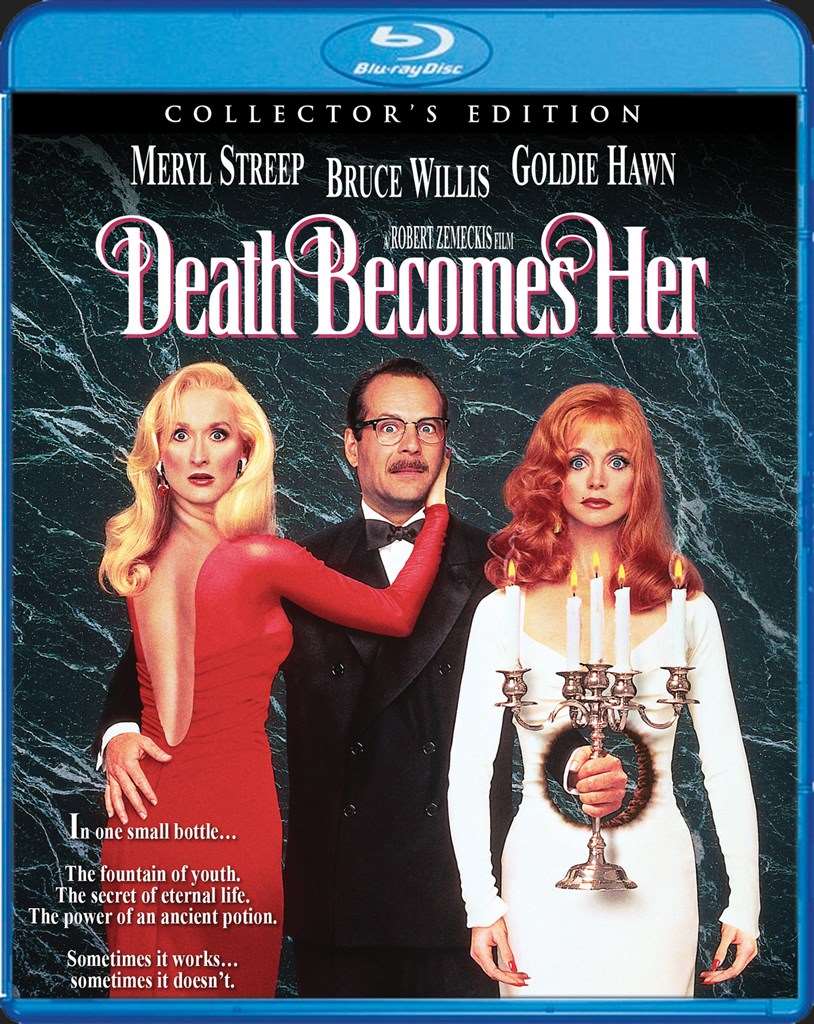 For those familiar with Streep, Hawn, and Willis, all three are revelations in “Death Becomes Her.” Streep is hilarious as a diva whose ego is matched only by her screaming insecurity. In the film’s opening, she leads a chorus line in a terrible musical. She puts her back into it, smiling like she’s trying to punch you with her teeth, grimly stomping through the choreography like she doesn’t notice the audience rapidly leaving for the exits.

Hawn is wonderful too, as her sweetness goes psychotic. Her obsession with Ernest is all the more pitifully funny for what a twerp he is. It’s startling to be reminded of just how good an actor Willis can be when he makes an effort. Doing a complete heel turn from the macho swagger of his action roles, in “Death Becomes Her” he’s a squealing straight man in Streep and Hawn’s battle royale. Gulping down his morning Bloody Mary with supreme self loathing and flinching at every one of Streep’s hurled barbs, he comes close to stealing the movie. Thanks to the sheer heights Streep and Hawn are willing to go, he doesn’t quite get there. It’s a shame they didn’t reunite for a couple more comedies together, they made for a terrific team.

The film looks absurdly gorgeous. Cinematographer Dean Cundey shoots Los Angeles and its mansions to be coldly perfect, marble hard and as full of fake pomp as the characters themselves. It’s a perfect backdrop for the film’s “The Bad and the Beautiful”-meets-EC Comics sensibility. Even Alan Silvestri’s score is just right, his melodramatic sweeping strings right out of David Raskin’s music for studio Hollywood dramas. That all of this top-shelf talent was included in a movie about three very awful people is one of the its funniest and most bitter jokes.

It’s that shot of bracing mean spiritedness running throughout that probably cost the film its audience. It also might explain why Zemeckis' next film was the morally responsible “Forrest Gump,” a blockbuster hit. But time has been kind to “Death Becomes Her,” and the mordantly funny eye it turns to Hollywood pretense and our cultural inability to forgive women for aging. With the virtual extinction of Hollywood’s interest in women over thirty, it’s a real pleasure to see a film centered on and held down by two actresses as strong as Streep and Hawn. And much like its protagonists, the film has proven it can survive its lumps and soldier on. There are few bigger monsters, and jokes, than the ones we make of ourselves. “Death Becomes Her”’s enduring appeal is its ingenious recognition of that.