One could call it "The 'Empire' Effect.” When Lee Daniels' series made its debut on Fox back in January 2015 it was an immediate smash. Though not a surprise to most people, it was obviously a shocking revelation to TV network executives who seemingly had no idea that a dramatic show starring and about black people could be such a hit. They've been convinced that there aren't many black people (and white viewers as well) in the entire country who could support a black TV show, and that the pitiably few black viewers were already perfectly content to watch the same old boring dramas and sitcoms with white actors. However, now that they have seen the light, networks—in particular Fox—know they have a new audience that they inexplicably never programmed directly to before.

This fall, there are several new black-themed shows eager to attract this new audience including Fox's baseball drama "Pitch”; the cop drama "Shots Fired" conceived and produced by "Love and Basketball" and "Beyond the Lights" director Gina Prince-Bythewood; and the revamped "24" series "24: Legacy," this time with a black lead (Corey Hawkins). Over on FX is Donald Glover's oddball comedy drama "Atlanta" which is already being touted as one of best new TV shows of the season. HBO has the highly anticipated and long-in-the-works comedy "Insecure," created and starring Issa Rae, who has become an underground sensation with her highly popular web series, "The Misadventures of an Awkward Black Girl."

But another much-anticipated show is the new drama "Queen Sugar," not only for the story but also for the behind the scenes developments. Produced by Warners Television & Harpo for Oprah Winfrey's OWN channel and premiering on September 6th and 7th with a two-parter, the show is the brainchild of executive producer and co-creator Ava DuVernay ("Selma"). It's also the first TV show ever in which most of the first season's episodes (it's already been greenlit for a second season) were directed by black women, including DuVernay (who directed the first two episodes), Tina Mabry ("Mississippi Damned") and Tanya Hamilton ("Night Captures Us").

Of course, the purpose of having a show made by black female directors is twofold—first, to give a platform to filmmakers who find it hard to maintain a career and face a lack of opportunities; second, to offer a different voice than the usual white, male-dominated point of view on television, leading to a more nuanced and realistic portrayal of black people instead of the same old worn-out stereotypes.

"Queen Sugar" does succeed very well in that regard, though it does delve into predictable tropes. After all, it is first and foremost a soap opera. But the show (at least from the first three episodes provided to us) is more quiet and introspective. The focus is not so much on dramatic hysterics, but the subtler day-to-day struggles and inner battles that family ties go through to survive another day. 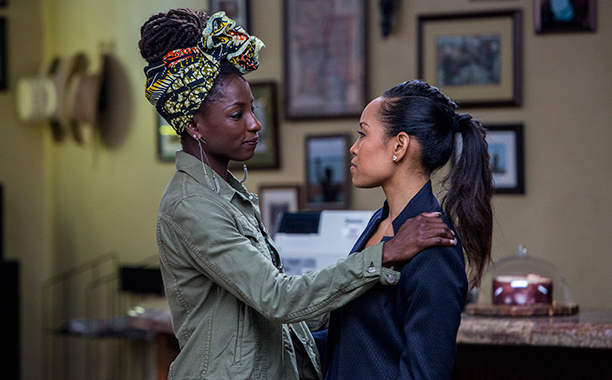 The series revolves around three adult siblings, known as the Bordelons of Louisiana. First, there's Nova (Rutina Wesley), the oldest and "mature" one. She’s politically and culturally conscious, complete with dreads and a nose ring, and rules her siblings with harsh love and stern commands. But, she has some issues of her own: a messy affair with married white cop and a possible son (though her relationship is not exactly clearly explained in the episodes provided) locked away in prison.

Then there's the brother Ralph Angel (Kofi Siriboe), a devoted single father but chronically unemployed man who is unfairly looked down by his sisters as being irresponsible.

And finally there's Charley (Dawn-Lyen Gardner) the "perfect" one with the "perfect" life who is quietly resented by her brother and sister for basically abandoning the family for a life away from home elsewhere. Charley’s perfect bubble is broken when her NBA superstar husband gets caught with a hooker. (The scene where Charley confronts her husband in the middle of game is one of the very few false notes in the series so far.)

But the three of them get hit with the biggest blow when their father suddenly dies, only to find out that the family's sugar cane farm, which he was overseeing, was actually in dire financial straits and that no crops had been grown on it for several years. With the pressures of their father's death and the farm situation, long simmering resentments and jealousies begin to, loudly at times, raise their heads. It all leads to a permanent disintegration of the family until they decide to put all away all the past bitterness and come together to run the farm.

All of the performances are uniformly excellent despite Rutina Wesley's tendency to go a bit "extra" in some dramatic scenes. But it's the more unusual little touches that make "Queen Sugar" special, such as the sweet romance between the siblings’ aunt (Tina Lifford) and her suitor (Omar Dorsey). Rarely do we see romances involving older people on TV or in the movies; love is exclusive to high schoolers and cynical millennials. One is hard-pressed to think of another romantic love story between two middle-aged black people on television. It's a show of quiet rhythms and visual splendors, such as the green dewy acres of farmland in the morning, the textures of black hair against dark silk or the tip-toe flirtation between a farmer and a still bitter Charley softly opening up to his kind graces. Whatever the target demographic, these are the touches that accomplish what any good soap opera needs to do—they get you hooked.