All Together: Communal living, senior style

"All Together," or "Et si on vivait tous ensemble?" (97 minutes) is available via VOD on various cable systems, and on iTunes, Amazon Instant and Vudu.

The cinema of 2012 is brought to you by Viagra, or so it seems. The year has been chock full of movies about horny old people. Sure, the characters still complain, have aches and pains, and deal with moments both senior and regrettable. But Nana's also out to prove she's still got the ill na na, and Gramps is in the mood like Glenn Miller on an endless loop. Films like Dustin Hoffman's "Quartet," with its randy Billy Connolly, and the main characters of Stephane Robelin's "All Together" dispel the myth that once you go gray, the sex goes away. These folks are reclaiming "bitch and moan" from its grumpy origins, and turning the phrase into a cause-and-effect relationship. 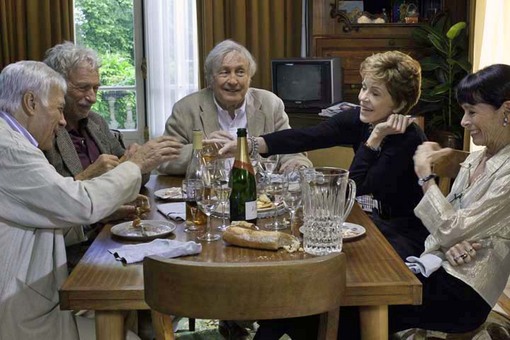 Robelin's English title "All Together" refers to both the condition of being stark naked and the living arrangements of its main characters. Jean (Guy Bedos) is a former activist still looking for protests while his wife Annie (Geraldine Chaplin) wants to build a pool to entice the grandchildren to visit. Albert (Pierre Richard) is dealing with the onset of dementia; his wife Jeanne (Jane Fonda) has tragic medical problems of her own. Both couples are friends with widower, Claude (Claude Rich), whose loneliness prompts the suggestion that all five of them move into Jean's house to look after one another in their old age. The suggestion is quickly denied, but halfway through "All Together," everyone winds up under the same roof. Things start to unravel from there, all under the watchful eye of a young Ph. D. student named Dirk (Daniel Brühl). Dirk is observing the household for his doctorate on elderly people moving in together. "It's the latest trend," he tells Jeanne. 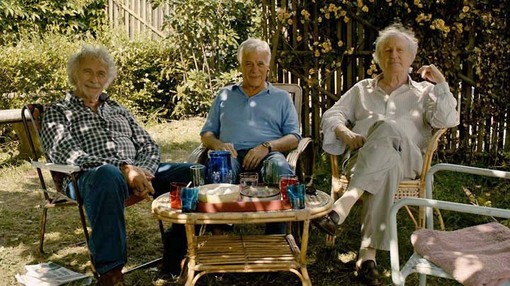 Claude may be lonely, but he's not sitting around awaiting the Grim Reaper. A lothario in his younger days, Claude spends his time photographing nude, far younger prostitutes at local cathouses. He also gets what he paid for, at least until his heart gives out and his rooster stops crowing. A visit to the nursing home Claude's son has put him in goes comically awry, convincing his lifelong friends to kidnap him and take him home. Figuring that there is strength in numbers -- they can take turns watching the rapidly deteriorating Albert and keeping Claude company -- everyone moves in with Jean and Annie. 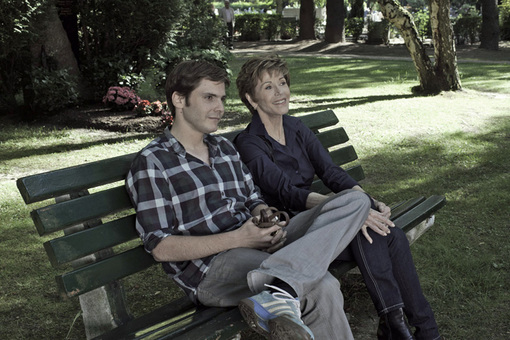 Originally hired to walk Jeanne's bear of a dog after it causes Albert to fall, Dirk joins his elders in their "commune" to observe their habits. He becomes a trusted confidant to Jeanne, with whom he spends most of his time. Fonda and Brühl work well together, with the former turning in fine work as the most interesting character in the film. She looks at her husband with a mixture of love and impatience at his forgetfulness, and at Dirk with both motherly intent and more than a dash of potential lust. Dirk is little more than a device, sort of a placeholder for the younger character the American remake of "All Together" will demand, but Brühl is a likable presence. 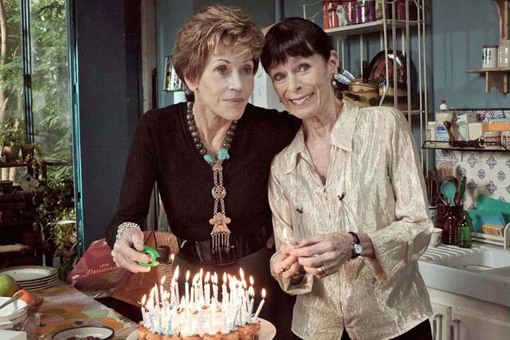 "All Together" is a loose translation of the French title "Et si on vivait tous ensemble?" ("And If We All Lived Together?"). Robelin's script answers that question with a plot we've seen many times before: Infidelity and old secrets threaten to tear apart the 40-year relationships forged by the cohabitants. "All Together" handles this familiar plot in less successful fashion than the upcoming films "Quartet" and "A Late Quartet." The former, directed by Dustin Hoffman, even has similar characters to the ones seen here, played by Brit acting legends (Michael Gambon, Maggie Smith, Billy Connolly, Tom Courtenay) instead of French ones. Where the two films diverge is the attempted self-sufficiency of the characters. The stars of "Quartet" are being looked after in the kind of home to which Claude is initially sent. This film wants to explore the possibilities of dying on as close to one's own terms as fate will allow, and looking after those in a similar situation. 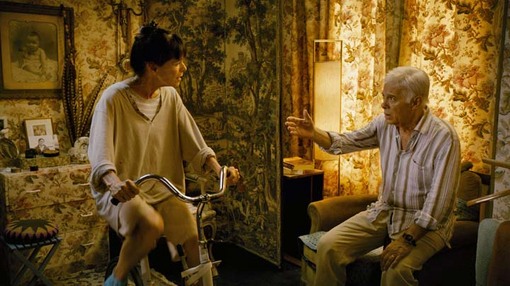 The subject warrants investigation, but "All Together' takes over 40 minutes to set this aspect of the plot in motion, then does little with it. Its characters are all curmudgeonly, sometimes in an off-putting manner that makes them unpleasant to observe. I admire the notion of presenting these characters as people who aren't meant as cute comedic stereotypes, but "All Together" doesn't develop these personality traits. Additionally, Albert, who uses a "Memento" (2001) style method to help him remember important details, seems to wilt only at convenient screenplay-designated moments. Jean and Annie can't stop bickering (except when they're getting bizzy) and Claude's sole purpose is to be the reason to both bring everyone together and pull them apart. 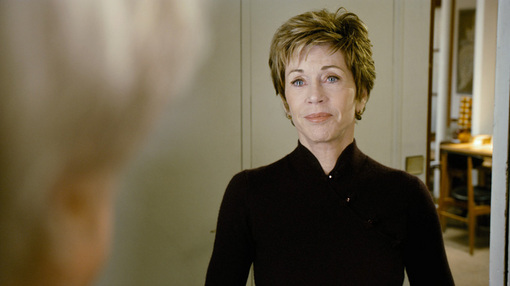 I feel a little guilty in not recommending "All Together," if only because I really liked Fonda's performance and the ideas Robelin initially presents. There's a better movie to be made from the sitcom-ready situation of cohabitation as a means of retirement-age independence, and in a few scenes, "All Together" aspires to be that movie. But we have the unnecessary Dirk subplot, the secrets and lies, and the unexplored topic of just how the hell these folks would deal with Claude's bad ticker, Jeanne's medical surprise and Albert's increasingly dangerous lapses. That topic has far more dramatic aspects than the tired "I screwed your spouse, so now you know" shenanigans to which "All Together" resorts in its third act. And I had mixed feelings about the film's ending, which feels like an unwise grasp for your heartstrings. Ask yourself if the final catering to Albert's delusions is the right decision. I didn't think so. 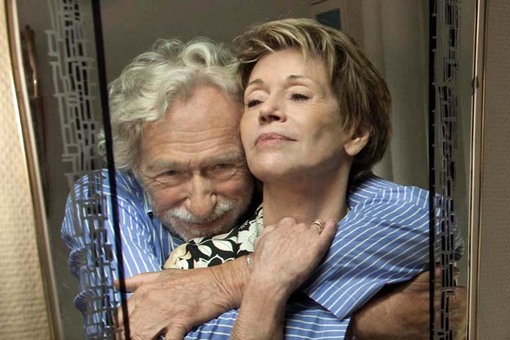 Since this is a French film, there is a lot of talk about (and a few scenes of) sexual activity. The concept of senior intimacy is treated seriously and nonchalantly, which is refreshing, but it may rankle some viewers. One scene of dialogue sent me running for Q-Tips to nail into my ears with a hammer: 74-year old Jane Fonda, who looks fantastic for her age, rambles on in French about her onanistic habits. Immediately, I imagined Jeanne bursting into flames from the friction while The DiVinyls' "I Touch Myself" blared on the soundtrack. You have to give Fonda credit for daring to be sexy (and in an earlier scene of her posing for photographs, she pulls it off), but this is "too much information" about this particular Jane Fonda Workout.