"Nobody puts Baby in a corner" is one of those iconic movie lines that makes no real sense but skates by thanks to the charisma of the man saying it (see also: "Well do ya, punk?"). The prose is too heavy-handed to work outside a movie, but when Patrick Swayze's Johnny Castle bursts into a dance hall in his leather jacket and throws the line like a frisbee at Jennifer Grey's Baby, she barely has time to catch it before he sweeps her, and the audience, off their feet. No, they don't make 'em like they used to … but they're not shy about remaking them.

TV Networks have lately turned into echo chambers of nostalgia, counting on childhood fondness to gut critical faculties and make audiences tune in to see hollowed out versions of old favourites. Everything from "Taken" to "12 Monkeys" has been turned into a series and live telecasts of musical movies like "The Sound of Music" and "Grease" have become perennial ratings events. ABC's first foray into the latter genre is the wildly misjudged "Dirty Dancing," based partly on the 2004 Broadway show adapted by Eleanor Bergstein, who also wrote the 1987 movie. The 2017 "Dirty Dancing" has a lot to offer the bad taste thrill-seeker, and not much else.

Baby is now played by Abigail Breslin, and Johnny by Colt Prattes, a dancer with a serial killer stare. They're still mismatched lovers at a Catskills resort for the wealthy in 1963. They still have to become perfect dance partners in a week to help a friend get an abortion, and the music is still an uneasy mix of the modern and the antique. The comparisons stop there. The newer movie is a two-hour tug of war between overt cuddliness and a preteen-friendly version of gritty realism. There is much singing and dancing, all of it too earnest for words.

Prattes' Johnny doubles down on the prickliness of Swayze's performance, except it never melts into charisma as the best Swayze performances used to. The new Johnny Castle starts and stays a deeply unpleasant slab of meat. Breslin's Baby is, by contrast, a step in the right direction, bringing real awkwardness, unique physical presence, and emotional depth to a thinly sketched character. The film uses her enthusiasm rather uncomfortably, however, as in the scene where she and Prattes have sweaty sex in a wholly unjustified bid for maturity. Having to watch the former "Little Miss Sunshine" writhe around with Prattes in oppressive candle light is just plain creepy, implicating an audience who showed up for harmless fun in a voyeuristic stunt. The first sensual meeting of Baby and Johnny in the original feels like an extension of their dancing. Breslin and Prattes just seem like they’re being asked to gyrate robotically to give the film an adult sense of daring.

Elsewhere the performances induce whiplash. "Modern Family's" Sarah Hyland is … in the movie. Bruce Greenwood ably takes over for Jerry Orbach as Baby's father but they've unfortunately expanded the part, giving him a few songs and a failing marriage to a harried-looking Debra Messing. Messing is not only an inadequate replacement for Kelly Bishop but she also lacks Greenwood's warmth and grace. In fact, Greenwood's Jake Houseman is the best thing about the movie until the singing starts. As his life falls apart he sits down at a piano to moan a mournful ballad and out comes a voice like Michael Bolton's, thanks to a metric ton of auto-tuning hammering his vocals into shape. Greenwood's dignity is defeated by the impostor's voice issuing from his mouth. It falls to Tony Roberts and Billy Dee Williams, playing resort staff, to reground the film after that moment, as no one else in the cast is up to the task. Williams has only to smile from behind a pair of cheaters and a newspaper and his charisma temporarily irons out the film’s many issues. Roberts is clearly having a ball playing the villain, relishing every second of his performance like the old school theater actor he is. 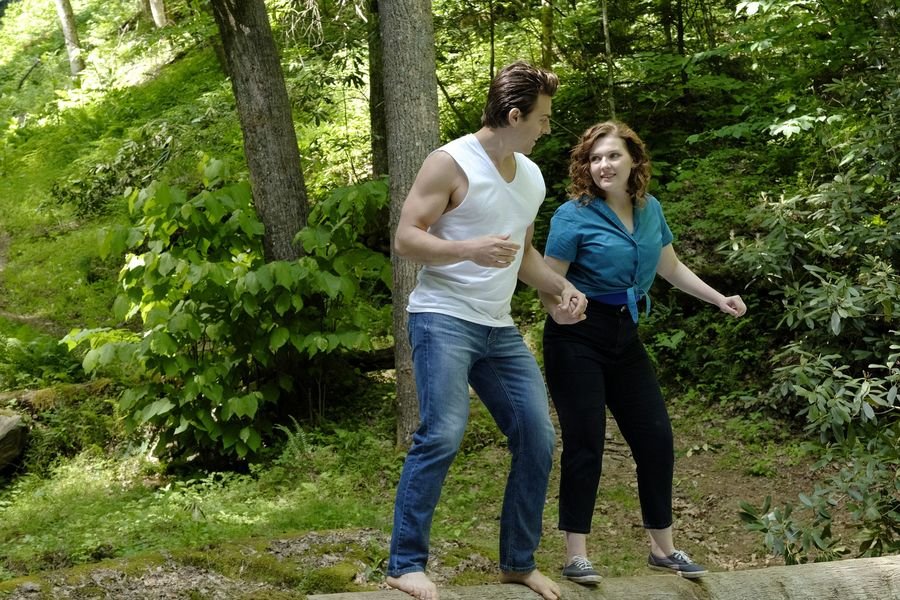 Director Wayne Blair, on whose shoulders the above failures ought to be placed, lights every corner of the set, as afraid of shadows as he is of nuance. Every room is a little too big and every actor is a little too far away from the camera, as in a multi-camera sitcom. Blair has no eye for the dancing, which is his most lethal failing. He has no sense of how to film bodies, the space needed to ensure we see the impressive physicality of each performer, no sense of how to communicate the sensual thrill of two people touching. Blair may well be trying to shoot around the lackluster choreography, which also fails the performers at every turn. The dancers may as well be rogue parade floats accidentally smacking into each other. The music direction is similarly ghastly. Slick, soulless covers of 60s and 80s pop and ballads stumble around like reanimated corpses on the soundtrack.

That's all bad enough, but the final 15 minutes detonate a nuclear bomb of misbegotten ambition in the viewer's brain. It dares you to reconsider your opinion of every poorly staged number and overacted monologue. Prattes' constipated Johnny Castle storms the dance hall for his closing performance, walks over to the table where Baby and her family sit, and delivers the now iconic line that lodged "Dirty Dancing" into popular cinematic imagination. His somnambulant read of "Nobody puts Baby in a corner" spurts from his lips like a mouthful of water he'd forgotten to swallow. A film which had been held together with hope and a prayer until this point, finally falls apart. Then perversely, it keeps going.

The movie flashes forward to Baby watching the Broadway musical version of "Dirty Dancing" as a thirty-something wife and mother. Johnny Castle is the star choreographer of the show based on their summer of love. Neither looks comfortable as they share a nervous moment of reunion after the curtain call. This moment rockets the 2017 "Dirty Dancing" past maudlin into a hitherto undiscovered uncanny valley of horrific judgment and negligible old-age makeup. It is the "Please Clap" of movie endings, a nightmare of dimwitted sentiment, and it deserves to be put in a corner and made to think about what its done.