David E. Kelley used to be a dominant voice in television, creating hits like “Picket Fences,” “Ally McBeal” and “The Practice.” It’s been over a decade since he launched a show that really clicked with audiences (“Boston Legal”), and he’s had some notable missteps lately, including the abysmal “The Crazy Ones.” To be honest, I assumed his most productive days were behind him, and approached his latest anti-hero legal drama “Goliath” with notable trepidation. So imagine my surprise to report that it’s pretty darn entertaining. Bolstered by as A-list a cast as anything on TV (with the exception of “Westworld” perhaps) and tighter, less showy writing than we’ve come to expect from Kelley, “Goliath” cruises through boardrooms of billion-dollar law firms and seedy bars populated with lowlifes with equal amounts of confidence. It has echoes of “Damages” in its complex legal machinations and “Better Call Saul” in its troubled protagonist’s fight for the little man. I’ve only seen two of ten episodes that will launch on Amazon this Friday, but I’m excited to watch a third. 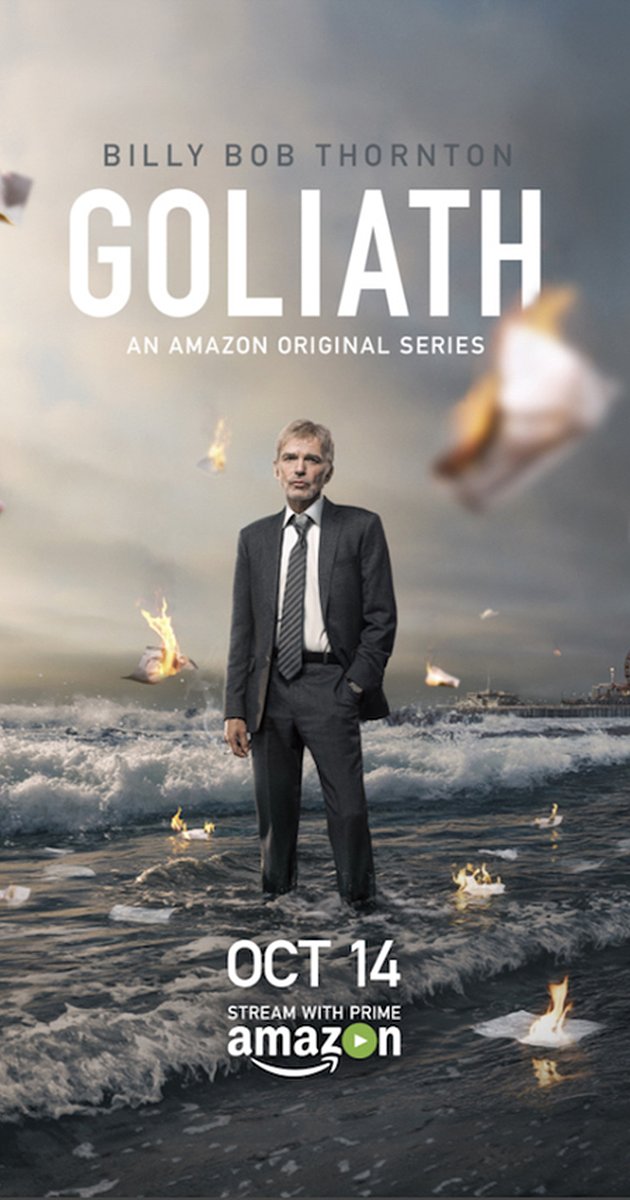 Billy McBride (Billy Bob Thornton) lives in a seedy motel. He’s the kind of guy who wakes up, probably mid-afternoon, steals a piece of bacon off a room service tray left outside a neighbor’s door and then takes another neighbor’s paper. Although Kelley quickly shows how this world can be a bit unexpected as McBride gives the bacon to a stray dog he’s befriended and then has to use the paper to clean off the dog shit into which he steps. McBride isn’t so much a fast-talker as someone who can quickly adjust to the demands of the situation. Take for example a great scene in which he’s talking to a couple of fishermen about a case. At first, he’s jovial and proposes cracking open a few beers. However, when they don’t bite, he switches to threatening them with insurance fraud. McBride isn’t the smartest man in the room, but he has that ability to adapt and to go to Plan B, C and D when Plan A isn’t working.

Billy McBride used to be a legal hotshot. He founded Cooperman/McBride, one of the biggest law firms in the world, but his alcoholism got the best of him. Now professionally disgraced, he spends most of his time in bars, saying wonderfully TV things like “I’ve had the shit beat out of me a lot of times. I just replenish with more shit.” It’s there that a woman named Rachel (Ever Carradine) finds him, and tells him a story about how her brother’s suicide wasn’t what the authorities claimed it to be. He didn’t blow himself up on his own boat—he was killed, and the attorneys at Cooperman/McBride helped cover it up. Prove it and Billy can help take down the firm he created.

If McBride is the David, the Goliath is represented by Donald Cooperman (William Hurt, in icy cool “A History of Violence” mode), who still runs the firm from a dark room buried deep within its headquarters. Cooperman is presented almost as a Faustian villain, with half his face burned and a sensitivity to light. He runs things through a team, including Callie (Molly Parker), Letts (Damon Gupton), and the new girl Lucy (Olivia Thirlby). He doesn’t just want this case to go away. He wants to destroy Billy. Again. Kelley and his team fill out the supporting cast even further with a prostitute turned legal secretary (Tania Raymonde), a fast-talking co-counsel (Nina Arianda) who learns to hate Billy, and even a daughter (Diana Hopper) and ex-wife (Maria Bello), who, of course, still works at Cooperman/McBride.

While no one is more exhausted than me with anti-hero stories, Thornton quickly elevates the material, making McBride into a well-rounded, believable character. He reminds me of the protagonists of Carl Hiaasen’s best books—a man who once thought life had defeated him but sees another chance. Thornton has struggled to find the right film roles lately, but he really connects with what makes him a great actor in the TV format (he was amazing on “Fargo”). Whatever the reason, he’s great here, but the whole cast works. We’ve really gotten spoiled by the glut of Peak TV when a show starring Thornton, William Hurt and Maria Bello isn’t making major headlines.

Will “Goliath” eventually get those headlines? Sadly, probably not. It’s a show like “Longmire” or “Bosch”—programs that have loyal audiences but don’t get thinkpieces or listicles because they don’t have the right hip hook. No zombies, androids or imaginary friends here. Just a guy trying to do what’s right for a client who he believes in, and learning to finally believe in himself again in the process.