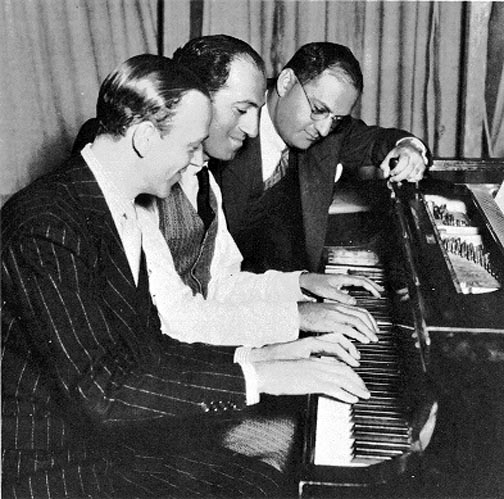 Over a wet, grey Seattle weekend, I immersed myself in Wilfred Sheed's delightful book about the architects of the American popular song, "The House That George Built: With a Little Help from Irving, Cole, and a Crew of About Fifty." (This is one of the big reasons I love Seattle: There's nothing better on such a day, when the leaves are just starting to pop yellow orange and red against those dark slate skies, than kicking back with such a book and the Sunday New York Times, and spending the day quietly and cozily soaking it all in.)

Sheed's memoir/survey is an idiosyncratic/anecdotal appreciation of the greats -- Berlin, Gershwin, Arlen, Carmichael, Ellington, Kern, Porter, Rodgers, and others who are included in his canon only if, by his estimation, they have published more than fifty standards "by which I mean in this case more than fifty tunes that are still popular enough over fifty years later for most cocktail lounge pianists to have a rough idea of them, and for their copyrights still to be worth fighting for." Or, perhaps, if he happens to have met them.

To me, film is just music set to light. Yes, once "talkies" became the technological standard, the "lyrics" increased in importance, but the dialogue and the stories it help to tell were never so much about the words. They were about the music -- of motion and stasis, shadows and light, gestures and expressions....

Sheed describes his view of music and lyrics this way, and I see parallels to the relationship between movie and script:

There's musical genius and then there's verbal genius. To match the explosion of melody [in the early 1920s] came a river of light verse that turned up everywhere, from the largest magazines to the smallest local papers, and it seeped into the most minor songs, guaranteeing some wonderfully literate and accomplished lyrics.

But -- and here some readers and I may split -- the tunes were still the big news. "Didn't they write great lyrics back then?" is a common question I've heard, to which I have two Yes, but... answers, one being Yes, but it's my impression that they still do. [...]

My second answer is Yes, they wrote some great lyrics but they also wrote some lousy ones. The standards didn't care. There have seldom been dumber words to anything than those of the young Ira Gershwin's "Lady Be Good" and "The Man I Love," while the Ellington-Strayhorn gem "Take the 'A' Train" barely has a lyric, only an address you wish would change from time to time.

On the other hand, there has never been a standard without a great tune -- not even a great funny standard. Surf the Cole Porter songbook and you will undoubtedly find some great comic poems still waiting for the right tune to drive them off and make them rich and famous. But although Cole could have dashed off another two hundred choruses of "You're the Top," he couldn't have written a second tune to save his life. And without those magic tunes, his light verse was as unsalable as most poetry.

This doesn't mean the right lyric can't make all the difference. A lyricist is a musician too, one who arranges tunes for the human voice so that you can "hear" them for the first time. But once the lyrics have done that, and made you laugh or cry two or three times at most, they fade in importance. Again and again, people will request a favorite song while knowing only its tune.

Are some movies terrific primarily because of the script? Probably. Preston Sturges and Billy Wilder come to mind. But the script wouldn't work unless it had been acted and directed well. I've heard recorded arrangements of "Night and Day" that made me cringe. Likewise, I've seen actors and directors (and editors and composers) butcher a scene or a sequence that could have been great if they knew how to play it. (Remember, however, that if a scene doesn't work, it's probably least likely to be the actor's fault. Choosing the wrong takes and/or assembling them poorly can make the greatest actor in the world look like a grade school thespian.)

Quotable dialog -- epigrams, witticisms, punchlines -- can be fun, but they don't make a good movie any more than they make a good song. "Here's looking at you, kid" is an immortal line, but it could have been a howler. You wouldn't remember it without the music of Bogart's voice and the look in his eyes. I will never quite understand how "You can't handle the truth!" entered the public domain (however briefly it may remain there) because, although Nicholson sells the hell out of it in "A Few Good Men," it's not a particularly memorable moment. Although both these lines are often used jokingly, acknowledged as clichés when used in casual conversation, one affectionately acknowledges a classic while the other includes an element of sarcasm or satire of the movie itself (almost like "No wire hangers!").

When the words and music seem inseparable, as if one could not exist without the other, that makes for greatness. And in song, and in film, it's a matter of composition -- but also performance and orchestration, whether it's Sinatra singing "So make it one for my baby/And one more for the road," or Walsh (Joe Mantell) intoning those famous last words, "Forget it, Jake, it's Chinatown."