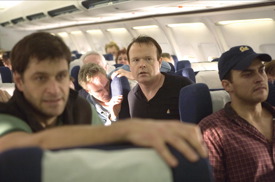 British filmmaker Paul Greengrass, as I've mentioned before, is surely the most accomplished action-thriller director around these days. "Bloody Sunday" and "The Bourne Supremacy" are evidence enough of that. This week, Greengrass's "United 93," about the September 11, 2001, flight now commemorated in a Pennsylvania field, opens the Tribeca Film Festival and then moves into theaters.

David Poland, over at "The Hot Blog," saw the film recently and writes:

The question on people's lips is, "Is it too early for this film."...

My reaction is that it was too early for the filmmakers, and perhaps the studio, to make the movie they meant to make. I don’t imagine the filmmakers believe this, but I felt like the dramatic choices you would make with this story could not be made out of respect for the dead. It is not too early to tell this story, but it is too early, I guess, to mythologize it.

Advertisement
I'm not quite sure what Poland means about the dramatic choices that "could not be made out of respect for the dead." But I do agree it's too early to mythologize it -- though perhaps I mean it in a different way than Poland does. As I said in an earlier Scanners post, I hope the film will resist the temptation to mythologize or propagandize what we know (and what we don't know) about what happened to Flight 93, and avoid attempts to create "heroes," like the Department of Defense did prematurely with Private Jessica Lynch, before enough of the facts were known. Not that those who helped prevent Flight 93 from reaching its apparent intended target in Washington, D.C., were not heroic; but their actions (as far as they are known) should be allowed to speak for themselves.

(Roger Ebert has his own take on this, which you can read in his review Friday. Meanwhile, he has an interview with Greengrass here.)

Take, for example, the question of whether the passengers entered the cockpit. After the Flight 93 cockpit tapes were played in the trial of Zacarias Moussaoui, The Washington Post published a story ("At Trial, Flight 93 Myth Finally Becomes Reality," April 13, 2006) in which it reported:

Much of the tape is unintelligible. There was loud static, and the voices, some speaking English and others Arabic, were often inaudible. It cannot be determined whether the passengers entered the cockpit, although it is certain they came close and forced the hijackers to abandon their attack on Washington.

(The official government transcript of the recording is available here.)

But Jere Longman of the New York Times, who covered the story for the paper and has also seen the film, reports:

In truth, no one can know precisely who did what during the rebellion that prevented the hijackers from reaching their presumed target in Washington. None of the 33 passengers and 7 crew members survived when the plane crashed into a spongy field outside Shanksville, Pa.

Not everyone could charge the cockpit along the narrow aisle of a 757 jetliner, family members concede. But they believe strongly that everyone did what he could in the face of horrific fear and certain death — consoling, encouraging, planning, praying.

In this widely held view, everyone should be considered equal in a collective act of bold resistance.

Advertisement
In fact, the evidence and eyewitness testimony have not established with 100 percent certainty what brought down Flight 93. We can only guess.

Longman describes the movie's version of events in the flight's last half-hour:

In the movie, it is Mr. Glick, a former national collegiate judo champion with an outsized body and the skills for close-quarter fighting, who leads the revolt, leveling a hijacker with a running kick. Later, he appears to break a terrorist's neck....

Mr. Greengrass was inclusive in his depiction of valor: Donald Greene announces to other passengers that he is a pilot and may be able to fly the jetliner if the hijackers can be overtaken. When they are, Mr. Nacke, a toy company executive with a weightlifter's physique, holds aloft a bomb wrestled from one of the terrorists and yells that it is a fake. Richard Guadagno, a federal fish and wildlife agent, screams for the attacking passengers to get inside the cockpit or they will die.

Early on, Lauren Grandcolas, an emergency medical technician, tends to another seriously wounded passenger. Flight attendants try to calm the passengers and later boil water and hand out forks and knives as weapons.

Finally, passengers break into the cockpit, and a thicket of arms reaches to wrest control from the hijacker pilot, Ziad Jarrah, as he drives Flight 93 toward the ground. It is not known if the passengers actually breached the cockpit. But the scene carries the symbolic truth of collective intent, said Paula Nacke Jacobs, the sister of Louis Nacke.

As you can see, there is plenty of room for speculation and dramatic license here. It will be up to the individual viewer to determine the line between false mythologizing and artistic liberties.

And John Patterson of The Guardian, a Brit reporting from the States, thinks all this "too soon" stuff is just rubbish, an indication of American ignorance of British documentary (or docu-drama) conventions:

Inevitably, given America's story-hungry media, the impending release of the movie was covered in the stupidest of terms. Is it too early? (It's been five years.) What do the families think? (Greengrass secured the cooperation of them all.)...

I'm inclined to think a lot of the problem with "United 93" comes from the American media's lack of familiarity with the essentially British quasi-documentary tradition that informs the film.... America has no equivalent to the work of Peter Watkins, which is almost Brechtian in its desire to expose the tricky mechanics of media presence at real or reconstructed events -- or of Ken Loach, who sought to import documentary realism to maximise the impact of his political message...

An American reconstruction of real events, usually in the form of a made-for-TV movie, will seek out "characters" and ensure they are played by stars. British film-makers, such as Alan Clarke in "Contact," will often strive to downplay dubious redeeming features or personal crises that might permit us to find points of identification within the drama. And certainly, as is the case in "United 93," there will be no stars for us to root for: it's a thoroughly honourable way to equalise the characters and to let the drama breathe.

Another part of the reaction to "United 93" is a certain craven American fear of looking at terrifying or unpalatable moments in history head-on....

It's as if examining these events or ideas might be too disturbing or challenging - as if we were all five years old -- and it somehow coalesces with the fact that 9/11 footage has been more or less banned from TV here, along with coverage of Saddam Hussein's trial or any discussion of the Bush administration's cutting back of funds to prevent nuclear proliferation. It's Homer Simpson logic: if we can't see it, it isn't real. It isn't happening. It will all go away.

That last paragraph reminds me of the depiction of Americans reacting to the prospect of a televised cartoon of Mohammed on "South Park": Everyone decided, out of fear and avoidance of responsibility, to bury their heads in the sand, so as not to appear complicit in case "terrorists" were enraged by the offensive cartoons.

Initial reports indicate that "United 93" is no cartoon. It will be interesting to see how critics and commentators and audiences interpret what, exactly, it is.