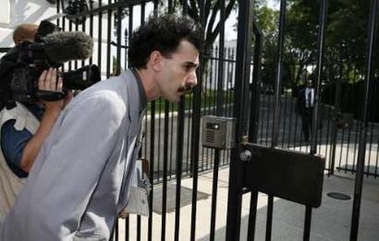 Secret Service agents turned away British comedian Sacha Baron Cohen, in character as the boorish, anti-Semitic journalist, when he tried to invite "Premier George Walter Bush" to a screening of his upcoming movie, "Borat: Cultural Learnings of America for Make Benefit Glorious Nation of Kazakhstan."

Also invited to the screening: O.J. Simpson, "Mel Gibsons" and other "American dignitaries."

Cohen's stunt was timed to coincide with an official visit by Kazakh President Nursultan Nazarbayev, who is scheduled to meet with Bush on Friday.

Nazarbayev and other Kazakh officials have sought to raise the profile of the oil-rich former Soviet republic and assure the West that, contrary to Borat's claims, theirs is not a nation of drunken anti-Semites who treat their women worse than their donkeys. [...]

Cohen's "Borat" comedy routine has drawn legal threats from the Kazakh government, which keeps a tight lid on criticism in its news media. Kazakh press secretary Roman Vasilenko said he was worried that some may take the Borat routine seriously.

"He is not a Kazakh. What he represents is a country of Boratastan, a country of one," Vasilenko told Reuters.

Advertisement
And from the New York Times:

Mr. Ashykbayev denounced Mr. Cohen’s performance as host of the MTV Europe Music Awards in Lisbon last fall, in which a skit mocked the imperial aura that surrounds Mr. Nazarbayev, the country’s president since independence from the Soviet Union in 1991. Mr. Ashykbayev suggested that Mr. Cohen was acting on behalf of “someone’s political order" to denigrate Kazakhstan and that the government “reserved the right to any legal action to prevent new pranks of this kind."

Mr. Cohen, who is Jewish, responded, as Borat, in a video posted on his Web site, citing Mr. Ashykbayev by name and declaring that he “fully supported my government’s decision to sue this Jew."

“Since the 2003 Tulyakov reforms, Kazakhstan is as civilized as any other country in the world," he goes on in the video, citing fictional details in the absurdly stilted English that is central to his act. “Women can now travel inside of bus. Homosexuals no longer have to wear blue hats. And age of consent has been raised to 8 years old."

But it was the Foreign Ministry’s complaint that gave some in the country’s news media a chance to report on it, and that was when most Kazakhs first learned that a faraway British comedian had turned the world’s attention to their country.

In an atmosphere of legal constraints on press freedoms, if not outright censorship, the ministry’s statement offered a way to poke fun at Mr. Nazarbayev’s near-absolute political power, at least indirectly, by showing what the fuss was all about.

Throw this Jew down the well, so his country can be free!