What if they didn't spend millions to advertise "Norbit"? 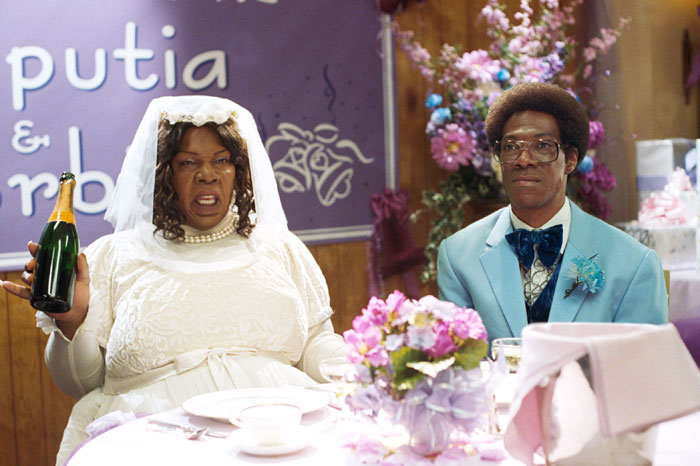 Brian Robbins has been making himself and others quite rich recently as the director of the Eddie Murphy comedy "Norbit" and the co-producer of last weekend's top-grossing movie, "Wild Hogs." But guess what? He's distraught that his motion pictures were not accorded a more positive critical reception. (He's almost as upset that more music critics aren't fans of "American Idol," but can't bring himself to talk about that just yet.) As he complained in The Hollywood Reporter:

"How does a movie score in the 90s with an audience and get a 9% positive rating on Rotten Tomatoes?" Robbins said, referring to "Norbit's" onslaught of negative reviews as summarized on the review compilation site, rottentomatoes.com. "How do you figure that? Is the audience that stupid? Is America's taste that bad? I don't think so."

While the jury may still be out on America's intelligence, Robbins has given up making movies for critics.

"If you read reviews on a consistent basis on all films, you realize that the majority of films just get murdered," Robbins said. "The only films that get good reviews are the ones that nobody sees. I just don't think you can make movies for critics."

Let me ask you: Did you make "Norbit" and "Wild Hogs" to please critics? Did you expect those movies to get good reviews? Do you think moviegoers read the negative reviews and then just decided to buy their tickets anyway? If that's the case, then what are you complaining about? You want glory and money? How often does that happen in Hollywood?

So, consider this: Did you ever entertain the possibility that perhaps "Norbit" and "Wild Hogs" were neither designed for, nor marketed to, people who pay all that much attention to movie critics? Why in the world would you think that general audiences and movie critics should agree? (See ancient analogy about McDonald's and food critics.)

Correct me if I'm wrong, but I don't believe "Norbit" (the movie that some speculate may have cost Eddie Murphy his "Dreamgirls" Oscar because it was released during the Academy voting period) was screened for critics. I don't remember about "Wild Hogs" because, well, that was so long ago. Seems like they may have screened it on a Thursday night for an opening the next day. But, really, why did you bother? Do you think most critics would go see your movies if they didn't get paid to? Do you realize that critics probably make up 0.0001 percent of the moviegoing population -- or less?

So, if you don't pre-screen the movie, then what more are you gonna do? Keep critics from buying movie tickets like everyone else (because their editors want reviews, even of trash)? Make all moviegoers agree to keep non-positive opinions to themselves -- you know, in case they have blogs or friends or something and might spread negative word of mouth? Ask more rhetorical questions?

I like this: "If you read reviews on a consistent basis on all films, you realize that the majority of films just get murdered."

YES!!! It may be just a coincidence, but most movies are also crap! Even if they're relatively enjoyable at the time, they're forgettable and disposable, like yesterday's lunch. Imagine if you had to spend more time writing about movies than you actually do seeing them. Because most reviews take longer than 90 minutes to write, which is probably why many critics prefer writing about films that give them something to write about. Something that may be worth thinking about after you pay for your parking.

And then there's this: "The only films that get good reviews are the ones that nobody sees. I just don't think you can make movies for critics."

You are so right about that! Nobody sees "The Departed" (RT: 93%) or "Casino Royale" (2007) (94%) or "Little Miss Sunshine" (92%) or "Borat" (90%) or "The Devil Wears Prada" (76%) or "Cars" (76%) or "Harry Potter and the Goblet of Fire" (89%), to name some of the top-grossing and/or most profitable movies of 2006. ("Pirates of the Caribbean: Dead Man's Chest" rated a 53%.) So, you should just stop right now trying to make movies like "Norbit" and "Wild Hogs" for critics. Don't waste your time on us ungrateful scribes who fail to sufficiently appreciate the joy you are attempting to introduce into our humdrum workaday lives! Here's the deal: You take the multi-million dollar ad campaigns and let the wretched critics scribble about those tiny little movies that can't afford those kind of expenses -- you know, "the ones that nobody sees" because aren't advertised in every conceivable medium for weeks before they are released. Deal? Deal!