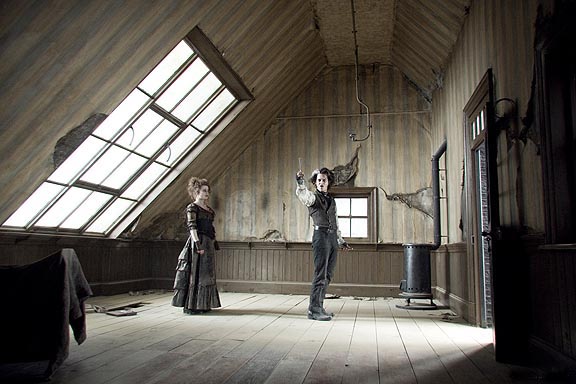 Attend the pale and Teeny Todd. He doesn't exactly cut an imposing figure. Jack Skellington with a thicker head of hair.

Those were among the first notes to myself that I typed after returning from a December screening of "Sweeney Todd: The Demon Barber of Fleet Street." Before that, it had seemed to me that Tim Burton (the Tim Burton of "Batman" and "Batman Returns," not "Mars Attacks!" (1996) or "Nightmare Before Christmas") might be, hypothetically, an ideal choice to make a film of Stephen Sondheim's musical-thriller masterpiece about a vengeful barber who conspires with a randy pie-shop proprietress to bake his victims into meat pies. Surely Burton would make it his own, a movie that wouldn't have to compete with the stage version because it would be a Tim Burton Film, existing in parallel to, but apart from, Sondheim and Harold Prince's achievement.¹

Not quite. It's one thing to Devoid of passion, grandeur, ghastly humor and operatic lunacy, Burton's "Sweeney Todd" is a plastic wind-up toy, a fast-food tie-in trinket. It belongs on a little gingerbread tchotchke shelf, next to your collectible "Macbeth" action-figurines. The best that can be said for it is that nobody's yet adapted the title property for film, so maybe that's something we can still look forward to.²

Sondheim himself has done a fine job of explaining why the filmmakers made the choices they did in bringing this "Sweeney" to the screen (New York Times: "Sondheim Dismembers 'Sweeney' .") And they're all perfectly good reasons. I understand the difficult choices that had to be made. How do you squeeze the show into less two hours? Slash some numbers, condense others, speed up the tempos. Do the performances (and the voices) have to be as strong and idiosyncratic for film as they do on stage? Not necessarily....

But reasons aren't as important as results. And what's wrong with Burton's "Sweeney" is that nearly every single decision -- in the cutting, the quickening, the casting, the character conceptions, the shot choices -- diminishes the power of the tale. OK, the opening (and recurring) "Ballad of Sweeney Todd," sung by a Greek chorus of streetfolk and Sweeney victims, is gone. But it was never just a device to speed up the narrative, setting up the story you're about to see. It creates anticipation and dread, and a sense of inevitability, building Sweeney into a figure of mythic dimensions, not some pathetic little barber who went batty and slit some throats. ("By the Sea" -- a number completely re-conceived for film and nothing like anything in the stage production -- is the most engaging song in the movie, and shows what Burton is capable of doing, had he put more thought into making the material his own.)

Burton's "Sweeney" begins as a disappointment (with an animated overture/credits sequence that's just a cutesy version of the one for Roman Polanski's "Fearless Vampire Killers"), and degenerates into a disaster... of mini-proportions. There's no yawning abyss here, no filthy cesspool, no "great black pit" called London. Just a puny soundstage mud puddle.

The music is here -- well, some of it, anyway, given what's been cut and what isn't sung, only rasped or mewled, by Sweeney Todd and Mrs. Lovett (Johnny Depp and Helena Bonham Carter, embarrassingly miscast). What's missing from Burton's version is the dance, the lilting quality that gives it a (fetid) air of delirium and dementia. Burton's characters, the pedestrian Sweeney and Mrs. Lovett especially, are too stiff and sober. Even Toby (who should be played by a man-child with an ambiguous, almost Munchkin-like voice -- not an actual child with the clear, high voice of a boy!) doesn't play drunk when he's drowning himself in gin. Nobody knows how to cut loose. 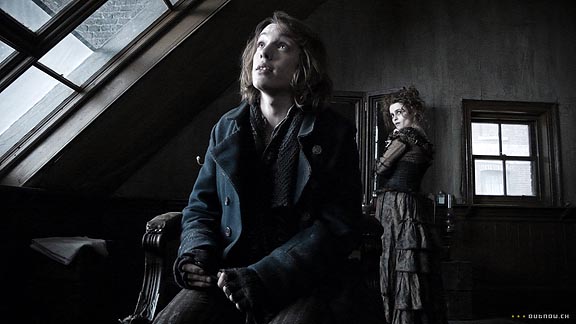 Anthony (or is that Johanna?) and Mrs. Lovett.

Here's the thing about "Sweeney Todd": Everyone is crazy. And they like it. They start off damaged and unbalanced (even in their naiveté) and slip over the edge, into the yawning pit of madness. It's a fallen world, long past redemption. Sure, Judge Turpin (played here by Alan Rickman) feels tormented about his lust for his ward Johanna (Jayne Wisener), daughter of the couple (Benjamin and Lucy Barker) whose lives he destroyed -- although the scene in which he flogs himself into sexual agony and ecstasy has been cut. (It was also eliminated from the Broadway run, but you'd think it would be the first thing Burton would have realized the film needed.) But Turpin and his Beadle Bamford are perverts, and they secretly get off on knowing it and flaunting it, like flashers parading naked beneath their robes of authority and respectability.

Sondheim has fun with his inane young lovers, the Kitty Carlisle and Allan Jones of this deranged "Night at the Opera." Anthony's (Jamie Campbell Bower) "love" for Johanna may be more benign than Judge Turpin's but equally compulsive and obsessive. He catches a glimpse of her in a window (echoes of the Judge's description of the sun from the window illuminating her body beneath her gown, from missing flagellation number) and it's love at first peep. Immediately he wants to kidnap -- er, rescue -- her: "Even now I'm at your window... / I am in the dark beside you, / Buried sweetly in your yellow hair! / I feel you, Johanna / And one day, I'll steal you!" (That's right: "buried.") Johanna herself has been driven mad by years of trauma and captivity, reduced to flitting around like a high-strung birdbrain in gilded cage. 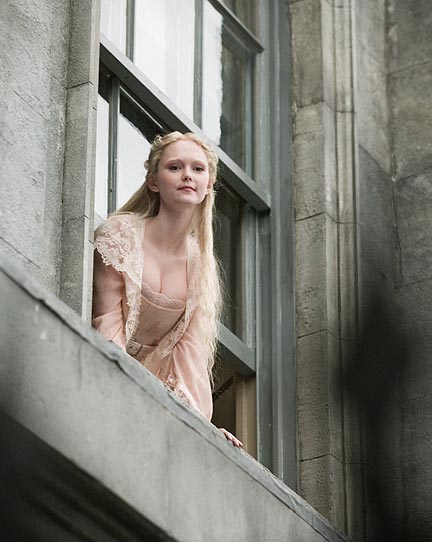 Yellow-haired, feather-headed Johanna at her window.

Although Anthony and Johanna's songs of passion and hysteria ("Green Finch and Linnet Bird," "Ah, Miss," "Kiss Me"), from Burton's movie, Bower and Wisener's voices have a power and presence that Depp and Carter can't approach. You know something's out of whack when the show's kinkiest, most chilling moment belongs to Anthony, an androgynous, virginal creature who exhibits greater drive and passion than the rest of the characters put together. After being threatened by Turpin ("You gandered, sir!") and beaten by the Beadle, he sings desperately of his desire to be "buried sweetly" in Johanna's yellow hair, with blood smeared around his mouth like lipstick.

Everything that's wrong with Burton's "Sweeny Todd" can be found in his treatment of one of the show's crucial turning points, "A Little Priest." It's an escalating verbal competition in which Mrs. Lovett and Sweeney goad each other, testing just how far into madness and mayhem each is willing to go. It begins as an idea that just pops into the creative little mind of Mrs. Lovett, a purely practical solution to two pressing problems: 1) the disposal of Sweeney's leftovers (i.e., the bodies of his sacrifices); and 2) a shortage of meat for pie fillings. I mean, Mrs. Mooney's neighbors' cats have been disappearing and, "a pussy's good for only six or seven at the most." It's not just appallingly funny to us; they take perverse joy and delight in imagining their future crimes of feeding the aristocracy into the guts of beggars (to paraphrase Hamlet).

It's Swiftian: "Oh what's the sound of the world out there / Those crunching noises pervading the air? / I't's man devouring man, my dear." Moreover, it's political, a dimension entirely missing from this "Sweeney": "The history of the world, my sweet / Is who gets eaten and who gets to eat... / How gratifying for once to know / That those above will serve those down below!" (The stage show begins with a curtain image of "The British Beehive," an illustration of the class structure.)

"A Little Priest" is an exercise in seduction through imagination, but there's nothing ripe or risque (or risky) about Burton's sexless approach (elsewhere, the Beggar Woman's obscene come-ons have been clinically excised!), and he dumbs down the wit by having Sweeney and Mrs. Lovett literally gaze out the window to receive their ideas. Show us a clergyman, and somebody sings a line about the clergy. Thud. So much for wordplay.

Above all, the song is a waltz. It's (queasily) romantic! Coming after Sweeney's bloody breakdown (the appropriately titled "Epiphany"), we -- and Mrs. Lovett -- need to feel that Sweeney actually could be falling in love with her when he sings: "Mrs. Lovett, how I've lived / Without you all these years, I'll never know! / How delectable! / Also undetectable! / How choice! / How rare!" In the depths of his despair, she has taken the risk of suggesting something one step beyond his bloodiest revenge fantasies -- and makes him laugh, turning tragedy into farce. He greets the cannibalistic abomination as "a charming notion." And yet in Burton's film the music, the staging and the performances are humorless and inert. Sweeneys exclamations ("Oh!" "My dear!" "How choice!") are affectless, as flat and dry as Mrs. Lovett's pasty pies.

That's one approach to the character. But it's a small one. And that is a tragedy.

¹ I saw "Sweeney Todd" at the Uris Theater on Broadway in early 1980 -- my first New York stage musical -- and was so blown away by its bloody grandeur, gutsy characterizations (Len Cariou, Angela Lansbury) and cutting socio-political comedy that no other musical stage production I've ever seen comes close. I'm not a big fan of musicals, but Sondheim and "Sweeney Todd" appeal to those who never got into the whole Broad-way, balcony-belting, Ethel-Merman style. No wonder it's said half the opening-night audience in 1979 walked out in disgust -- too rich for Broadway blood! I recommend the George Hearn/Angela Lansbury DVD of the stage show over the Burton movie -- not because one captures the stage show and the other is a movie, but because I find the interpretation of the material is much richer and stronger in the former. (BTW, I think Laurence Olivier's Oscar-winning film version of "Hamlet" is pretty thin and unsatisfying, too.)

² I'm no fan of Sam Mendes, a director attached to the project before Burton. But, hell, maybe he deserves a shot. What have we got to lose?